Calling A Winner At Eurovision 2019: The Importance Of Momentum And Storytelling Written by Sharleen Wright on May 13, 2019 | 2 Comments

What does it take to win the Eurovision Song Contest? From the Press Centre Sharleen Wright looks at one of the smaller factors that can be crucial to success: having momentum.

If you are currently sitting at home wondering who is going to win the 2019 Eurovision Song Contest, don’t worry. This feeling of bewilderment is echoed across the Press Centre in the Tel Aviv Expo.

Although the Eurovision community is as invested as always, nobody can agree on who the front-runner is. We have had years with overwhelming favourites such as Netta or Conchita: both of those winning acts were perfect storms that drew early fan love and mainstream press attention in the lead up to their Contests, and then delivered eye-catching performances on stage. This year we do not seem to have that.

Momentum is always key. A Eurovision winner’s trajectory should be like a pushing a boulder down a hill. The pace starts off slow but as the boulder goes down the slope it picks up speed to the point where its momentum becomes near-unstoppable.

‘Euphoria’ is the a great example of this trajectory with the buzz building from that first performance in Melodifestivalen. Even before arriving on the ground in Baku, Loreen was a clear frontrunner because we knew what to expect in regard to song and staging. We also had a reliable team in SVT that was able to build up and sustain the story around the song.

We also saw this in 2009 with Alexander Rybaks’ ‘Fairytale’ and to a lesser extent, Emmelie De Forest’s ‘Only Teardrops’ in 2013.  These acts were all an easy call to win the Contest. Their growing buzz led to betting predictions pointing towards their victory from early on. It didn’t take much effort to see the story being told.

The reveal of staging concepts during the week of technical rehearsals usually provides key moments of pickup for an artist on a winning trajectory.

After seeing all the rehearsals, nothing has captured significant attention within the Press Centre. Nothing has impressed us to the level where the buzz is palpable within the Eurovision bubble or the outwardly-focused social media set. The unfortunate large-scale ‘Sorry’ lyrics of Germany, Spain’s Wicker Man, the beating laser-heart of Azerbaijan, bendy poles for Australia, the return of sand artists, and multiple Sergeys have all fallen short of exciting us.

This year’s staging gimmicks are fine in and of themselves, but they appear very early on in their performances and quite often fail to develop from the initial reveal. While artists who have chosen a clear concept are squeezing out every possible ounce of suspense and drama, the concepts themselves can feel like a stretch. 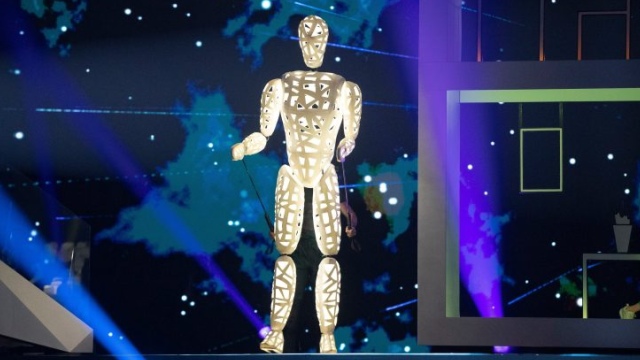 Spain brings us the horror of the Wicker Man (Source: EBU)

The storytelling in the staging should be landing like an anvil, but instead seems to be floating by like a feather in the breeze.  Once you realise what is going on at the start, these staging concepts do not build nor unveil further surprises beyond the 2-minute mark.  The ‘wow moment’ that we have seen in many of our classic Contests is simply not there.

Artists whose songs are less focused on staging and instead demand a crescendo of emotion and personal investment are also not building up the momentum as expected. Despite The Netherlands coming to the Song Contest as the favourite, the response to it from the Press Centre and fan sites has been muted. Inside the Eurovision bubble, ‘Arcade’ struggles into a 4th place prediction for its own Semi Final.

Duncan Laurence’s rehearsals were heavily burdened with high expectations and could never live up to the hype built up among the fandom as a consequence of its film clip. Remaining seated behind the piano places a physical barrier between him and the millions watching at home, which, when combined with the lack of looks down the camera lens, means we are denied the communication of vulnerability and emotional connection that we desperately need in this fragile song. Even the crescendo of the song denies us that emotional moment: when Duncan throws his hands into the air, the camera is looking on coolly from a distance rather than pulling in for a connection.

Trying To Build Up Momentum In The Press

We have now seen all 41 entries rehearse and address media. I personally feel that this year is lacking a visible story as the Contest approaches such as a meme of the magnitude of 2018’s ‘Yeah Yeah Fire’.

Sergey Lazarev, the most notable of the returning artists, has failed to make as much of an impact in the media as expected. Lazarev’s own press conferences felt overshadowed by Philipp Kirkorov as his head of production turned up as a walking headline.  His presence took the attention away from Sergey on the press interview stage, and the hunger for a win amongst the whole team appeared to be lacking despite feeling robbed of a victory in 2016. When asked about his chances, Sergey downplayed the need to return for revenge and rather focused on just enjoying the return to the circus of Eurovision with what the team believe is a better song for the Contest. 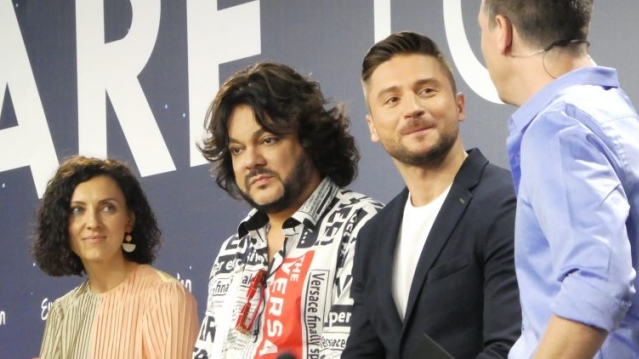 Moving between the various press conferences there are very few game-changing soundbites. Portugal failed to make headlines with Conan’s comments that the team were denied their requested production changes, and we have not seen Mahmood command media attention on the question of nationality and belonging in a host country that also shares these concerns. Momentum, this is not.

From a press perspective, the only artist that cuts through for potential headlines is Iceland’s Hatari. The band has not backed away from utilising the Song Contest in Israel as a way of opening discussion on politics and Palestine.  However, given the rules set by EBU, they are constrained in using the Contest as a platform.

Their press conferences have been the most heavily-attended over the course of the first week, yet much of their PR is not aimed at fan press. So far, the headline grabbing has not reached much beyond the Israeli media airing their concerns of their attendance, a smattering of broadsheet media in the UK such as The Economist, and their homeland press in Iceland. Nevertheless, this feels like a game plan that is only going to take flight after the Semi Final, but it is dependent on pick-up from the mainstream media – and they tend to turn up late in the Eurovision fortnight.

How Important Is Momentum?

The first week in Tel Aviv has not produced the same level of buzz for any one single artist as we have seen in the past. Whilst there are pockets of nationalistic pride for an artist, or even smaller pockets of true fandom developing, it’s clear that these alone are not enough of a sizable following to create the big moment. Nobody’s boulder is picking up speed. We are seeing this lack of momentum being played out in the betting odds and in the coverage produced so far.

In fact, if there is an overarching story of the Eurovision Song Contest 2019 for the greater audience at this point, it is that we are in Israel for Eurovision, rather than about what is happening in the Song Contest itself.

From my place within the Eurovision bubble, none of this year’s artists have found the perfect combination we have seen in past Contests to create a visible buzz around them. Every single entry has problems, which means that we cannot safely point to a winner or even a few clear front-runners for the crown.

This either makes Eurovision 2019 the most excitingly close Song Contest we have seen in some time, or one that will be tagged as forgettable and skipped over by the fandom in years to come.

2 responses to “Calling A Winner At Eurovision 2019: The Importance Of Momentum And Storytelling”