A Peek Behind the Curtain: A Day in the Life of a Delegation Written by Samantha Ross on May 6, 2019 | 5 Comments

At the Press Center it feels like all eyes are on rehearsals, but this is just one small part of a larger process that often goes unseen by members of the press or general public. Samantha Ross, a former member of Team Bulgaria, tells us a little bit about the bigger picture for Delegations.

With the privileged location that the Eurovision media finds itself in, so many things happen away from public eyes and behind the curtain, that is, in the Delegation Bubble. So while we’re all typing away in the Press Center, dissecting rehearsals and conducting interviews, what are the National Delegations actually getting up to? Turns out, a surprising amount.

Let’s start at the beginning. When you’re watching Eurovision at home, it appears that the weight of a nation’s hopes and dreams lie solely on the shoulders of the musical act chosen that year, and possibly their backing singers and dancers. The team itself is so much more than that, however. A Delegation can be comprised of dozens of people, from the Head of Delegation, Head of Press, songwriters, staging coordinators, record label representatives, social media experts, embedded photographers and journalists, choreographers, styling och consulting, graphic designers, friends, family, and everyone’s respective assistants. It can be a lot of cats to herd, so each nation is accompanied by Delegation Hosts, handpicked volunteers who not only help keep everyone in generally the same place at the same time, but also arrange for transportation, help organize schedules, provide cultural insight and advice, and act as general ambassadors for the host city. Without their help, a lot of the daily routine would fall off the rails. As with all of the volunteers at Eurovision, they are the glue that holds this crazy event together.

From the Press’s point of view, first rehearsals start at 10am here in Tel Aviv, but for a Delegation, the day starts much earlier. The team needs to arrive at the Delegation Bubble about 90 minutes in advance for orientation, getting into costume, undergoing makeup and hair preparation, and a safety briefing. Interspersed with that are impromptu rehearsals, often comprising of singers warbling with each other over a Bluetooth speaker or fine-tuning their harmonies ad infinitum. Following that, about 50 minutes before taking the stage, performers will test out their in-ear monitors, each individualized to the user’s needs. Fifteen minutes before rehearsing, performers are backstage, squeezing in a few last-minute vocal warm-ups and indulging in the tips, tricks, and traditions that they use before a performance to calm their nerves and focus. Prayer, meditation, breathing exercises, primal screams…whatever it takes to get oneself centered. As you feel the bass reverberating from the previous song practicing ahead of you, the gravity of the moment becomes so palpable.

Katerine Duska and team, testing their vocals at Eurovision 2019 (Eurovision.tv)

As the talent heads on stage (and the hidden backing singers tuck themselves into their designated area, unseen by the general public), other members of the delegation make their way to a few rows of chairs in front of the tech desk to watch the proceedings. With one eye on the stage, and the other on monitors, instant feedback can be given and implemented. With luck, an act can get three or four run throughs in the half hour they’ve been allotted. While the Press Center sees a half-hour’s worth of stagework, and folks at home see a minute-long clip on YouTube, delegations have been playing a long game. During first run-throughs, acts are focused less on powerhouse vocals and more on acquainting themselves with a new stage, and making sure camera angles are getting closer to perfection. What you see, and what you’re critiquing, is an ongoing work in progress. The moments that matter most won’t happen until Week Two, when juries and televoters weigh in.

While the press digest the rehearsals, the delegation higher-ups roll over to the Viewing Room to dive into the details, taking twenty minutes to dissect what had just happened on stage. The recording of the best run-through of the day is played for the group (normally the artists, Head of Delegation, Head of Press, choreographer, and record label representatives), and they, alongside a Viewing Room Director, dissect every angle, special effect, and lighting cue, trying to maximize each and every frame of the three minutes they’ll have. As stage effects become more complicated (moving beyond wind machines and pyrotechnics into augmented reality and overlays), no detail is overlooked, and the twenty minutes allotted for the Viewing Room never feels like enough. Changes are made both from production’s end as well as from the performers themselves.

From the Viewing Room, on-stage acts roll over to a Makeup Consultation, where further refinements are made in an artist’s look. Whether a singer is going for a dewy glow, a natural appearance, or an avante-garde lewk, subtle changes can make a world of difference. This also doubles as a touch-up session for the face-to-face interactions that artists will have with the press immediately afterwards.

Once makeup has been perfected, delegations roll on to their Meet and Greet sessions, laid-back chats that are a half-step more casual than a full Press Conference. For many acts, especially those who were unable to attend any of the preview events earlier in the spring, Meet and Greets are one of the first exposures that they have to the Eurovision press corps. The span of time between arrival in the Delegation Bubble to the end of the Meet and Greet is about four hours or so, often without a bathroom break or meal. When followed by one-on-one interviews with various press outlets, a day’s events can extend far beyond what the written schedule would suggest, and it can be downright arduous. One of the artists I was working with was so focused on the tasks at hand that they neglected to stay hydrated, and nearly collapsed when they finally returned to the hotel after a twelve hour day. 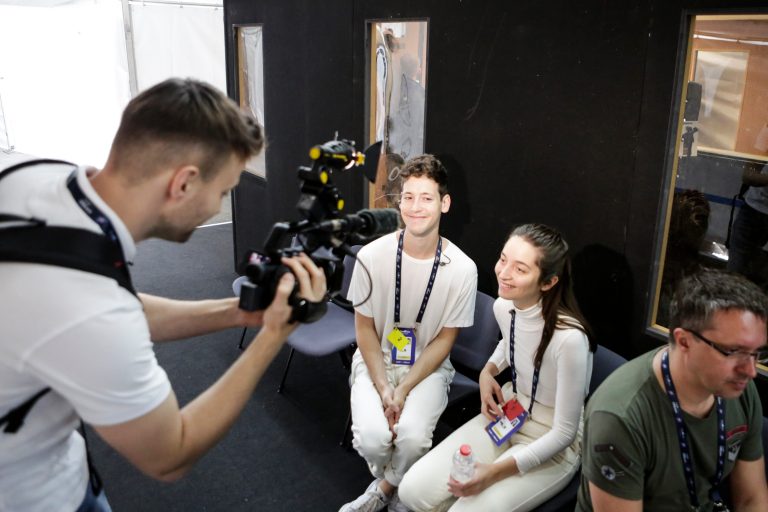 And they have to do it all over again for their Second Rehearsals a few days later.

After a delegation leaves the Bubble, that doesn’t mean the work is over for the day. From extra choreography rehearsals to gigs at the Euroclub to events at their national Embassy to multi-segment postcard shoots (which was part of the roster in Kyiv), it’s no wonder that some artists opt to have a lie-in rather than take part in some of the excursions and tours that host broadcasters provide. A walking tour of local street art may sound lovely on paper, but if given the choice between that and a chance to decompress, some may choose their own self-care and well-being over local tourism opportunities. It often happens that a singer and their team decide that vocal or physical rest would be better for them at that moment than an interview. The forty-one acts in this year’s contest are professionals, but they are also human.

In the constant hubbub of the Eurovision bubble, it’s sometimes easy to forget that run throughs, especially in these early days on site, are just a small fraction of a Delegation’s overall experience. There are so many pieces of the puzzle that are invisible to the majority of viewers, but are so crucial to an act’s time here at the Contest. At the end of the day, all everyone wants is a great performance on the nights of the Semifinals and Grand Final. Everyone, from the volunteers to the press to the delegation team to (of course) the artists want to make themselves and their nations proud.

5 responses to “A Peek Behind the Curtain: A Day in the Life of a Delegation”