The 2018 Semi-Final pot allocations have been tweaked from previous years. John Egan takes a look at the changes and tries to make sense of the decision behind them and the impact of the pot distribution on qualification.

Germany did it for only the second time. As did Austria. And Portugal did it for the first time ever. Any broadcaster can win the Eurovision Song Contest in the twenty first century, whether it has ‘friends’ or not. And every winner that has qualified out of a semi-final did so with a commandingly high score and a top two finish in its semi-final.

In other words, Eurovision winners do very well in both their Semi Final and Grand Final appearances. No surprise there. But there’s another aspect to the Song Contest: participating and getting a placement that, on some level, corresponds to the calibre of what is sent. Something that did not happen as reliably in the years before a jury component was re-integrated into the scoring system.

This article is not about winning the Eurovision: it’s about qualifying from a Semi Final, and therefore getting a chance to appear on Saturday night. The implications of the possibility of qualifying from a Semi Final are significant. In the early years of the Semi Final system worthwhile entries sometimes struggled to qualify because of public voting patterns favouring friends and neighbours and offering a slight edge. If qualification chances were largely determined before performing, why should unaffiliated countries bother? What was the point?

If voting skews were seen as a problem, the first solution proffered were the pots. 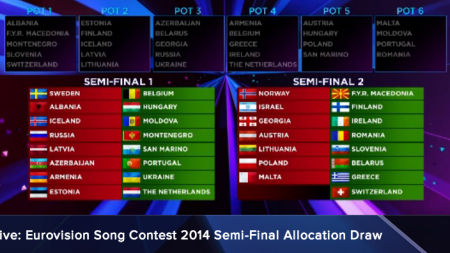 Beginning with Belgrade 2008, Semi Final entries have been put in pots based on televote (rather than jury) history, and geographic location. There have been five or six pots per year: in years with five pots, two generally have seven members—otherwise most pots have five or six.

Mostly importantly, there have three pots that have been consistent in terms of their membership, with minor changes year upon year:

The other pots mostly include pairs of countries that tend to swap votes (Romania/Moldova, Greece/Cyprus, Latvia/Lithuania) and some that perhaps might be expected to swap—but do not consistently do so (Belgium/Netherlands).

Half of the countries in each pot are randomly allocated to the first Semi Final, and the other half to the second (and to the first or second half of said Semi Final) at a random draw in January. As well, the pre-qualified Grand Finalists—The Big 5 members Spain, Germany, the United Kingdom, France, and Italy, plus whomever is hosting—draw to vote in either Semi Final. With some exceptions…which will be noted below when relevant.

If we have a clear system of pots, why do the pots change, year upon year?

When the host broadcaster is not a Big 5 member (the United Kingdom, France, Italy, Germany or Spain), that means one less Semi Final participant. Aside from the host entry being directly qualified for that year’s Grand Final (and while they will vote in one of the Semi Finals), the hosts are not allocated to a pot. Instead, like the big 5 that year’s hosts draw to vote in one the two Semi Finals—without consideration of how their previous “pot mates” have split across the Semi Finals.  Potentially, that can lead to an extra voting friend in a Semi Final.

Here’s how the host Semi Final votes were allocated over the previous five Contests:

Austria has never benefited from consistent neighbourly or shared linguistic support: they have always been allocated in one of two “miscellaneous” pots alongside former co-state Hungary.

In 2013 there was no Scandinavia pot since Denmark had requested to appear in the first semi-final and Norway the second. Pot 2 had Finland, Iceland and frequent Scandinavia pot member Estonia. For Copenhagen 2014 it was decided in advance to split Norway and Sweden across the two semi-finals, in order to maximise local fan Semi Final ticket chances. Pot 2 had Finland, Iceland and Estonia. In 2015 the Scandinavian pot included both Estonia and Latvia.

Ukraine withdrew in 2015 because of war, but they have always been in the Russophone pot, including in 2016. Armenia, Russia, Azerbaijan, Ukraine and Georgia all qualified in 2016: Belarus was the only pot member who failed to.

In 2008 both Azerbaijan and San Marino made their débuts. Both were put in a “miscellaneous” pot, but the Azeris were moved into the Russophone pot the following year. Australia made their début in 2015 as a one-off special guest, but when they returned the following year they were allocated into the miscellaneous pot. It will be interesting to see where future débutants might allocated. The numerous North African (Morocco, Algeria, Tunisia, Libya, Egypt) and Middle Eastern (Lebanon, Jordan) countries with EBU member broadcasters could lead to the creation of a la Francophonie pot… were enough of them to participate in a given year.

The dynamic that has impacted constitution of the pots most often has been the withdrawal or return of broadcasters to the Eurovision Song Contest. Trying to track all these changes gets rather messy rather quickly. Let’s focus on how the return of a broadcaster has impacted the pots:

In other words, those previously allocated to one of the three main pots have been returned to those pots. Those who were not have remained not. Mostly…

The Pots For Lisbon

In 2018 we have three changes: Ireland, Israel and Estonia have moved pots. Let’s look at each’s televote allocations across the most recent semi-finals to see if we can understand the changes, starting with Estonia, who this year they are in one of the miscellaneous pots.

There are around 1.5 million Russian speakers living in Israel, representing almost 20 per cent of the population. Across the Russophone pot Israel has awarded a total of 30 televote points, representing 13 per cent of the total points awarded. Hence their shift out of the Russophone pot. Again, this move makes some sense—though there is another option for the Reference Group (see below).

Ireland is the intriguing one. Here are their recent semi-final televotes:

Ireland has awarded most of its televotes to three countries: Lithuania (46 of 48 points), Poland (32 of 36 points), and Latvia (15 of 24 points). Yet they are moved to the Scandinavian pot for 2018. To whose members they have awarded a total of 27 points: 12 per cent to a pot that represents around 12 per cent of the competitors. This makes little sense. Previously Ireland, Lithuania and Poland were in a pot, with Latvia joining them around half the time.

Let’s take a look at how many points Ireland received from the Scandinavian pot members over this same period:

These numbers are very low—so getting too much support from this pot’s traditional members cannot explain Ireland joining their pot. With Lithuania, Poland and Latvia in a different pot, there will be at least two and as many as four of Ireland, Lithuania, Poland or Latvia in one semi-final. It is unclear who will benefit from this.

Would less be more

The changes for Estonia and Israel make sense, based on the televote numbers in recent years: the benefit of shifting Ireland in the Scandinavian pot seems less clear. One conclusion to make from these changes is that the Reference Group seems to be avoiding the creation of one or two somewhat larger pots, for the Yugosphere and Russophone networks.

The Russophone pot could include Israel and the Baltics (as former Soviet states) as well—even if none consistently delivers the massive televote scores this pot’s core members often do. There could be as few as four pots:

It is worth noting that currently the pot system does not require pairs of countries that vote for each other persistently to be split across the two semi-finals. There’s currently no barrier to Moldova and Romania being in the same semi-final. And pairs of countries swapping douze points has not led to a poor entry qualifying over a strong one.

This Is Why The Pots Are Important

In its current iteration the scoring system weights the televote and jury votes equally. There’s no averages, no combinatorics: the top 10 place entries for both the jury members and public in each country allocates 58 points during a semi-final or Grand Final. The EBU presumes that professional juries might have some biases, but expects jurors as professionals, to judge entries based on merit against the proscribed criteria. Hence the pots being focused on televoting patterns only.

Since the pot system was introduced the qualification records for several countries have improved (Estonia, Belgium, the Netherlands) while others have waned (Macedonia). Only Russia, Ukraine and Romania have maintained perfect qualification records (excluding withdrawals) and every currently participating broadcaster has qualified at least once from a semi-final. It remains a struggle for participants like San Marino and Czechia (who have each qualified once), though perennial also-rans Bulgaria have achieved two top five results in the last two years.

On a fundamental level, strong entries do reasonably well. Significantly because the pot system increases the statistical chance of qualifying for unaligned and smaller countries. It is this somewhat levelling of the playing field that has made it worthwhile for Cypriot, Austrian, Bulgarian, and Dutch broadcasters to aim higher. And it is entirely plausible that our next Lena, Conchita or Salvador will represent San Marino or Czechia.