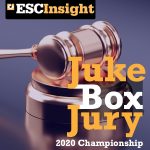 Last place at Eurovision? They can stop the sting