Running Order Analysis of the Eurovision Grand Final Written by Ben Robertson on May 21, 2021 | 2 Comments

In the early hours of Friday morning the running order for the Grand Final of the 2021 Eurovision Song Contest was revealed. ESC Insight’s Ben Robertson gives you all the details you need about what it means, the stories in the show, and who he believes has an extra competitive edge in this show.

Efendi from Azerbaijan will sing in position 21 in the Grand Final (photo: Thomas Hanses, EBU)

The running order for the 2021 Eurovision Song Contest is as follows. 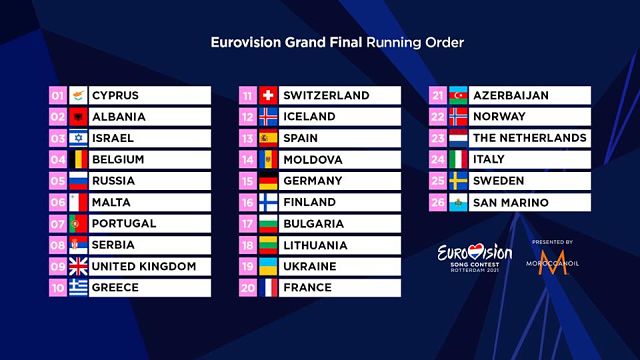 Running order of the Grand Final in the 2021 Eurovision Song Contest (Image: EBU)

This running order, like all other Eurovision running orders since 2013, is controlled by the producers of the show, and then approved by the European Broadcasting Union.

There are some controls over that. Firstly the host country, the Netherlands, randomly drew the number 23 to perform in. For the remaining thirteen slots in the first half, and twelve slots in the second half. These were randomly drawn at press conferences in Rotterdam (the 2nd Semi Final qualifiers drew their running order slots backstage in the delegation bubble, away from the eyes of the press). From that random draw, the running order is then created with the intention to “craft a more entertaining, better paced show, that allows different styles of song their space to shine.” Another factor in producing a running order is also technical, often dividing up the most intricate performances so that the running of the show is as smooth as possible with just 40 seconds from song to song.

The running order for the 2021 Eurovision Song Contest follows some traits that have been commonplace in Eurovision shows in recent years. Cyprus opening with ‘El Diablo‘ is incredibly logical, as it is a well performed uptempo number that screams Eurovision Song Contest. The theory is that this is exactly the performance that those who are dipping into Eurovision for the first time on Saturday will want to see, and get them hooked for more.

The draw of second in the running order, a position without a winner in Eurovision Song Contest history and generally thought to be difficult, goes to Albania (although Croatia has managed to win from second place in Junior Eurovision). Some will see this as unfair, with Albania singing from second in the running order again, after ‘Ktheju tokës‘ had the same fate in 2019. However the production team responsible for the running order this year is different, and the decision very logical, with this year’s Festivali i Këngës winner a cultural shift away from the Scandinavian production Cyprus brings to the table.

The other slot to mention for its predictability is that of San Marino. The appearance of Flo Rida has been one of the most talked about “will he/won’t he” spectacles of the Eurovision circus this year. That he has appeared in Rotterdam, helped San Marino get to the final, and undoubtedly will be one of the mainstream media’s most talked about entrants means it is logical to have ‘Adrenalina‘ be the show closer. The logic here of course that people are more likely to keep watching to see Flo Rida bust a move on stage.

Messages To Make You Think

Those of you who have read my previous running order thoughts will know there are three sections that I particularly look out for in choosing a running order.

It so happens that this year’s running order provides opportunities to do the latter in different ways. The running order still follows a typical sawtooth approach of having contrasting song styles back-to-back, but I’m struck by those thematic patterns which appear in the show order.

Take the similarities of theme between song five, ‘Russian Woman‘ and song six ‘Je Me Casse‘, in how they both take up the messages of female empowerment, standing up for yourself and being who you want to be. That these songs are side-by-side in the running order is fantastic public service broadcasting, as it encourages these topics to be discussed in living rooms across the continent.

Thinking competitively, this is good for both songs as well, as there is greater opportunity for the audience to compare the two of them and how well they approach their art and message. It can be said on first glance that Malta benefits in this comparison, with Destiny’s more accessible song style and powerhouse vocal an easier appeal for many.

I equally love how Jendrik and Blind Channel are back to back in slots fifteen and sixteen. ‘I Don’t Feel Hate‘ takes on the issue of bullying and trying to ignore what other people say, whereas ‘Dark Side‘ takes the more active approach to stand up against those try to oppress you. How both use the symbol of the middle finger in completely contrasting ways in their music adds to this effect, and I suspect many commentators will latch on to that as a talking point. Hopefully from there fans from Lisadell to Latvia will also continue the conversation on this issue so relevant to today’s society.

I have to give a slight nod of the two here to Blind Channel, with the more active message more likely to engage the voters with a call to action.

Finally I also have to mention the choice to have Efendi sing in position 21, followed by Tix in song 22. While casual viewers may not know about the social media drama, both acts have played a role in curating an attention-seeking soap opera style romantic connection between the two of them. That they are both now back to back in the running order allows for the show team to easily feed into this story and give ammunition to commentators, both online and in the commentary booths, to create a further narrative to keep voters hooked all the way through to song 26.

Does The Energy Last?

There are four key moments in the show where I anticipate a huge build-up of energy to hit the Rotterdam Ahoy with aplomb. The most obvious of these comes on the back of the host country entry, performing in twenty-three to a mainly Dutch audience, and flowing through favourites Italy, Sweden and the epic Sammarinese finale.

But there’s other crescendo moments worth highlighting, and important for the competitive nature of the Contest. That link from above between Russia and Malta I also consider to work well for Malta on the back of Russia, which does a great job of building the crowd energy up from Hooverphonic just before.

Later on in the first half, I also note how the uplifting track ‘Embers‘ for the United Kingdom is followed by home-town-girl-representing-Greece in Stefania, which just slam dunks all the crowd energy onto Gjon’s Tears and the wall of sound that ‘Tout l’Univers‘ will stun the arena with. That build up of energy with no doubt lift the Swiss entry for the audience in the arena and I assume the audience at home as well.

Further on down the running order as well I highlight how the combination of Lithuania and Ukraine really helps the latter entry of the two. The Lithuanian song was a great show opener on Tuesday’s Semi Final, and with both songs providing a left-field interpretation of an up-tempo Eurovision number I have lots of faith that the ordering here means ‘Discoteque‘ is the warm up for ‘Шум‘ to send the Ahoy into a frenzy.

What I am curious about is how much of this crescendo will carry on to the very worthy but certainly lower energy numbers that follow. Portugal follows Malta, Iceland follows Switzerland via their rehearsal video yet much love from the audience, and the ubiqutously French entry that is ‘Voilà’ follows Ukraine. The crowd will be heading into these full of hype and energy. In their different ways all of them have reasons to capture and continue the crescendo, but whether they succeed is going to come down to the artistry on the night rather than the song production alone. For Iceland’s case that’s different, and will depend instead on if the goodwill from the audience will last for the full three minutes.

Certainly in terms of discussing the winners and losers of the running order, we can clearly see the impact that the running order had on how betting odds moved in the aftermath. Malta became a less likely winner, being drawn so early, whereas Italy shortened to become a clear favourite after being the last of the considered favourites in slot 24.

I critique this and the community’s view of running order considerably, as it implies that the difference from slot 6 to slot 12, between Malta and Switzerland, or from slot 20 to 24, between France and Italy, to be so significant in the grand scheme of who will be victorious. The absolute position of running order does have an impact, but a tiny one, and one that alone is likely just a few percentage points on the leaderboard. Yes, I do believe the best song could win anywhere.

And regardless, as a general rule I note that all of those favourites have been offered plenty of space to show their worthiness to the voting public. No favourite has been buried, or given a death slot, or comes into a crowd off the back of something that seems to outshine it.

There’s huge anticipation that this year’s Eurovision is going to be one of the closely contested in recent memory, with the potential for huge divisions between the jury and the televote to add to that. This running order is entertaining, exciting, thought-provoking and genuinely gives all the contenders and absolutely fair crack for glory.

2 responses to “Running Order Analysis of the Eurovision Grand Final”