The Art Of Our Eurovision Semi Final Running Order Written by Ben Robertson on March 31, 2021 | 5 Comments

The European Broadcasting Union have revealed the running order for the songs in both Semi Finals of the 2021 Eurovision Song Contest. ESC Insight’s Ben Robertson looks at the art of creating a running order, and picks out some winners and losers from the producers’ choices.

This year’s Eurovision Song Contest feels one step closer to reality with the announcement of a running order for each of the shows. Before this announcement we already knew which half of which Semi FInal the thirty-three countries competing for the twenty spots in the final would be performing. Now we know the order of each performance from first to last. 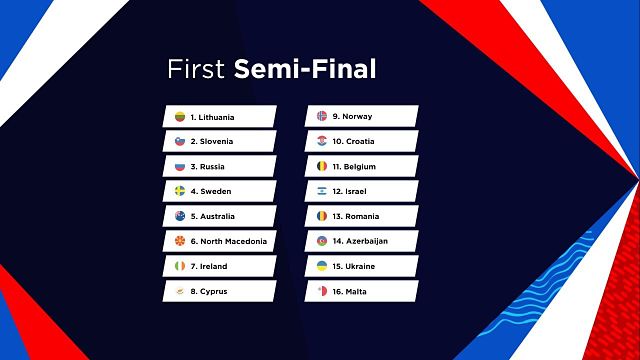 The running order for the 1st Semi Final of Eurovision 2021 (Image: EBU)

There is of course so much we do not know at this stage. We do not know how the songs will look on stage, what props they will have or what colours the lights will be in the show. The EBU explain that a producer led running order allows for a “more entertaining” and “better paced show”, and the tempo of the music is clearly only a piece of this puzzle, as noted by Executive Producer Sietse Bakker:

“You look at complex change-overs (props, motion), light/LED content, musical variety, solo/group and, if you can, some geographic spread. All while trying to achieve the ultimate goal of making each act stand out. Credits to our contest team!”

Another puzzle element to consider is how the 2021 edition will appear. Will we have a Song Contest with an audience in Rotterdam, or even in Rotterdam, or even with some acts needing to use back up tapes nearer to the time. Creating a running order is very much an art form, and like any art, there are many different interpretations. 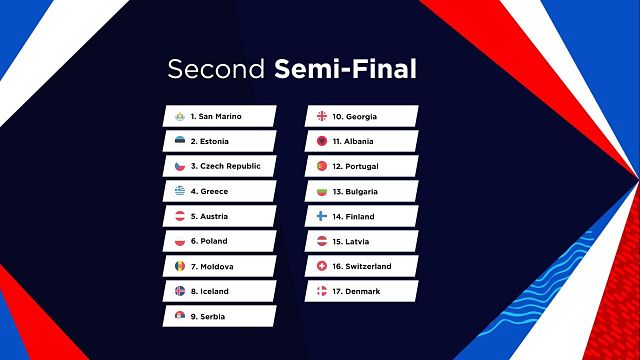 The running order for the 2nd Semi Final of Eurovision 2021 (Image: EBU)

The running order created by the Dutch broadcasters NPO/NOS/AVROTROS and then approved by the EBU. The Dutch team this year has used predominantly local talent – this will be the first Eurovision Song Contest competition since 2015 without Christer Björkman having some input into the running order production.

There is not so much tradition to easily look at from the Dutch broadcaster, and how it likes to create a running order. They have not held a multi-song, multi-artist, National Final for Eurovision since 2006, and their popular selection show for Junior Eurovision usually features a small group of between three and five artists. However, we can look at the running order that was created for the cancelled 2020 competition for an indication of its artistic style.

So much was par for the course, the inclusion of Sweden’s ‘Move’ and Greece’s ‘SUPERG!RL‘ as uptempo get-the-party-started show openers felt very modern Eurovision. What fascinated me was how the songs ‘drawn’ last in each Semi Final, Ukraine’s ‘Solovey’ and Latvia’s ‘Still Breathing‘ ending each show. These were brave choices. Both songs were difficult on first listen and make the viewer really consider the art on display. While different to last year’s running order, I see a similar pattern and style in this year’s creation.

The Narrative of the 2021 Contest

What I do like about this year’s running order is the type of narrative on display as we progress from song to song. I love that the competition will be opened by The Roop with ‘Discoteque‘. After the year that we have had, and, the return of the Eurovision Song Contest, The Roop provide the perfect return to those lost feelings. Lyrically the song matches this, with the song starting with “I feel the rhythm” and eventually through the first verse the singer feels the music “kicking in” and eventually taking over his entire being. It’s such a metaphor for where, hopefully, the world will be by May.

I equally adore the position of North Macedonia, but only if my theory on this is correct. ‘Here I Stand‘ from Vasil is this grandiose musical number that, if it had to fit into a West End production, would most certainly be the final movement of act one. Usually, a Eurovision Semi Final has two advert breaks, meaning the show is split into three parts (yes, very confusing with two half draws). I fully expect North Macedonia to conclude the first of these three chapters to the show, ending on those huge harmonies. With Ireland following drawn 7th in the running order, which feels like a great re-start to the show, I am very confident in my prediction of an advert break between 6th and 7th. We will find out when the show rehearsals take place on Monday 17th May.

And sticking with Semi Final One, the pairing of Cyprus’s ‘El Diablo’ to Norway’s ‘Fallen Angel‘ just had to be done. Yes, it is cliché to the extreme, but Eurovision needs that kind of signalling sometimes. We at ESC Insight have had the joy of commentating at Junior Eurovision previously, and this is exactly the kind of song-to-song run that commentators adore giggling about for the 40 seconds between each performance on stage. It does mean though that the story of Tix the artist, as excellently told on the official YouTube channel this week, may be lost.

Thursday’s opening with San Marino, and the will he/won’t he over Flo Rida’s featuring credit on ‘Adrenalina’ is the story of the season by far. What an early draw here ensures, above a fiery uptempo welcome-back-to-Eurovision number, is that Flo Rida can perform and make it to the green room in time for an ad break interview. Again, remember here that the running order isn’t just about creating the flow of songs, it is the flow of the entire show, and if he is in the Rotterdam Ahoy that night, producers want him in the limelight as much as they can.

And as much as San Marino seems to have an obvious show opener, Denmark closing has surprised many in the community. It should not have done. Pre-show favourites like Bulgaria and Switzerland are too gentle to be the climax, and there’s a need for Finland’s high energy rocky diversity higher up the running order. Ending with Denmark, and the piece of throwback nostalgia that is ‘Øve os på hinanden‘, is not so crazy after all. The song’s retro feel appeals to a certain Eurovision loving audience, and we’ve seen many closers in other National Finals fill this niche quite well. My most recent comparison would be to compare Fyr & Flamme to the roll Arvingarna have held in their last two Melodifestivalen appearances, where they were the last act in the final.

Of course we have Contest as well as art in the Ahoy Theatre. In terms of who has a good running order or not, I always look for three things. These are the absolute position (with later being better), crescendo effects (does the show build in energy to big moments) and side-by-side comparison (does the singer/song have the chance to sound more impressive than what is around it).

Easy ones first. Malta ending the show sounds like such an epic climax. Not just being drawn last, but the build from Romania, to Azerbaijan, to Ukraine – where ‘Shum‘ even increases in tempo through the three minutes just gets the crowd ready for one more wow moment. When Destiny’s intro kicks in, and it all sounds like a remake of Grease, with this killer voice, that’s not just an ending, it’s the perfect finale for the casual viewer all perplexed from the craziness beforehand.

What About Those Singing Second?

The songs placed second in the running order, from Slovenia and Estonia, have weaker chances now. Yes, the actual position of the running order is not great being so early. You may be aware of the history of being drawn second in the running order, and how no Eurovision winner comes from this slot. In semifinals it is far from the worst position, but in the producer led era only 4 out of 14 songs drawn second have qualified, a woeful statistic. That these songs, already outsiders, are drawn second, suggests to me that the production team thinks there is little worth waiting to see from their performances.

More riskily I am now anticipating North Macedonia, with that big crescendo, to be incredibly memorable and powerful. Whether that is a vote grabber I am unsure of – but it has been given more than just a small moment to shine before a break. I also feel Greece, with ‘Last Dance’ more full sound, to just sound overall more impressive side-by-side than the equally as pop but more intimate ‘Omaga’ from the Czech Republic.

Watch out too for Latvia. Samantha Tina is a bold character with a currently unfancied song but performing after Finland’s Blind Channel helps make her art more accessible, and gives the energy boost the audience needs to get into it. Blind Channel have a hard sell in coming after very many slower paced songs in the second Semi Final – and I cannot tell if the juxtaposition of calmness against their performance will help or hinder.

Remember How Not Important This Is

We know that running order does have a measurable statistical significance on the Song Contest, and that a producer led running order can amplify those effects. But, even if running order does have an impact, even with all these factors put together that impact is small. It is ultimately the song and the performance that matters most. Plus, remember that at this stage, the competition is only to get a top ten placing and the ticket through to the Saturday night. No doubt the Grand Final running order will more accurately showcase those artists that can bring the big moments to the live broadcast.

The 2021 Eurovision Song Contest Semi Final running order overall follows the same patterns that many a recent contest have done. But the show this year is a different beast. We don’t yet know how the Contest will be, and the month of May will mean more than ever before to this community. My first thought on glancing through this running order wasn’t the winners and losers like in previous years, it was the storytelling potential of all the acts. The whole show so far, going from Lithuania to Denmark, feels like a return to this beloved Contest; a celebration of what it is and what we have missed.

And my second thought was realising that, with this running order being revealed, we truly are one step closer to making the Song Contest happen.

Ben Robertson joined Ewan Spence to talk about the running order for our Patreon podcast. You can support ESC Insight at patreon.com/escinsight, and as a thank you we offer a few extra pieces of content to our supporters.