Deep within the depth of SVT’s TV Huset in Stockholm the plans for Melodifestivalen 2019 are almost complete. The final piece of that puzzle is the running order for the show, an event which brings such hysteria its reveal is livestreamed online. ESC Insight’s Ben Robertson was watching and looks at the reasons why and the fallout that post-it notes can have on your quest for fame and glory.

Since the end of November 2018 we have known who is performing in fifty-ninth edition of Melodifestivalen –  still the undisputed king of all National Finals. Melodifestivalen is such a deep part of the Swedish tradition that any small snippet of news attracts huge attention. SVT, Sweden’s national broadcaster, knows this, and drip-feeds snippets of information throughout the entire buildup, all to hysterics from the following media.

We have known who is performing in which show since their announcement in November, but on Friday January 11th we actually got to find out which order the songs were being performed in. This was announced through the medium of a casual livestream presented by the competition co-ordinators for Melodifestivalen, Christer Björkman and Karin Gunnarsson. This form of transparency about the process is also as traditional as the show itself. 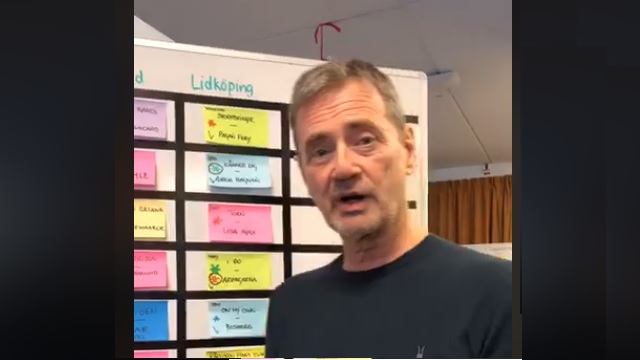 It’s little surprise therefore that the running order also follows all of the traditional rules of SVT programming.

The opener to the entire competition is Nano with the song ‘Chasing Rivers’, a collaboration of Melodifestivalen hot-shot composers Thomas G:Son and both Joy and Linnea Deb. Christer Björkman describes the song as “energy-filled” – and I have no doubts will be the type of track to get everybody clapping along not just inside the arena but inside every living room as well.

This is standard SVT broadcasting. The opening song should be rousing – a call to attention – something that gets the viewers not just to watch the show but be ready to be a part of the action. No matter how sentimental or strong, a ballad can never kick start the show with a bang. SVT’s running order model wants something for the audience to get behind, cheer and be animated for to open the show.

The closing numbers for each semi final as well generally has the same energy filled routine – the show at the end should always be something to keep viewers interest until the buzzer. However the nuance is that often the final song in the show is more unique. Looking at last year’s competition as an example, songs like ‘Dance You Off’, LIAMOO’s ‘Last Breath’ and Mendez’s ‘Everyday’ were very engaging, but all had something about them that wasn’t just a straight up song – they all offered something new be it in style or performance. Generally a show opener is more straight-laced, easier for all the public to engage with, whereas the expectation for a show closer is that it will deliver something fresh and new.

The other part to being ’drawn’ last in Melodifestivalen is that you are the act which has the most expectations, interest and hysteria thrust upon it. A good example of this would be Loreen’s Statements’ in 2017 which was drawn last in both competing shows. The one that is generating most excitement or intrigue is the one that often performs last. This theory explains why Anna Bergendahl has been given the last place position in her heat. A similar point can be made for Jon Henrik Fjällgren, the most recent winner of Sweden’s Let’s Dance, who will be most hotly anticipated in the third heat in Leksand – and let’s note that previous winners include Måns Zelmerlöw and Benjamin Ingrosso.

The rest of the running order is generally divided up to give the competition as much variety as possible. Melodifestivalen is, at least in its early heats, far from a pure music and songwriting competition. It is a party for all of Sweden through the medium of competitive music. It is important for SVT to actively include a range of different performers from all walks of Swedish culture. In each and every show we have young performers starting their musical journey alongside the welcome return of old veterans.

Note through SVT’s presentation video that many different colours of post-it note are used. That isn’t for prettiness value, these post-it notes reflect the ‘colour’ of each song, and very rarely are two colours back-to-back.

Another addition to the challenge is that the show must run seemlessly from one act to the other, and seasoned fans will remember glass shattering props, showers of water and lifts above the entire audience (and that’s just from one certain artist). Songs with less stagecraft are likely to be sandwiched by performances with a much bigger stage footprint purely to make the spectacle of live TV as stress-free as possible. I expect this partly might explain Wiktoria’s somewhat surprising early 3rd place draw in semi final one, following girl group High15 and a song called ‘Mina Bränder’…or, in English, ‘My Fires‘.

I know what I’m expecting on stage there…

The patterns outlined are true for all of the four heats. However what builds up over time is a whole range of stories based on how the show develops in the public’s eyes. Note how Nano opens up the first heat but bands The Lovers of Valdaro and Pagan Fury open up the third and fourth heats. From both I am expecting tempo-filled floor-fillers, but with increasingly diverse levels of genres on show (Pagan Fury are fulfilling the now tokenistic nod to rock in Melfest’s 28-strong roster) . Sure, heat four is a separate show, but the audience at home has been warmed up for more diverse sounds by the previous heats – once the cameras reach Lidköping everyone is ready to rumble.

It’s important to remember as well that the stories of the show will be the stories that dominate the mainstream entertainment headlines. Having lived in Stockholm for eight years I’ve seen my fair share of ’schlagerskandals’. Some of that story will undoubtedly come from the script, but also the story of the competitors themelves. Two members of former boyband FO&O compete, both looking to go one better than Felix Sandman’s second place last year. They are in heats two and three respectively, making for a compelling head-to-head narrative.

There are other examples. Tabloid press will love semi final three with Martin Stenmarck drawn 3rd and Lina Haglund drawn 4th. For those not aware, Martin has been together with Lina’s sister Hanna for nearly two decades. 15 year old Bishara has a song by last year’s winner Benjamin Ingrosso, and has lots of pressure on his shoulders as ‘the Instagram star’. The expectation will only increase now he’s been given the same running order position as Frans did with his 2016 triumph with ”If I Were Sorry”. Rebecka Karlsson will compete in heat three, the week after her Idol conquerer LIAMOO competes in Malmö Arena. The list goes on.

Why do these sparks of stories matter? Because these stories are  part of the way the public change their opinion about the songs.

A somewhat surprise qualifier last year was ”Fuldans”, a somewhat comedic take on Swedish music from dansband Rolandz. However, by heat four in what went down in history as a rather turgid 2018 contest, such a special Swedish pastiche found a frustrated audience ready to button-bash their smartphones and cast votes for it. I will never be proven right, but I don’t think the same act would have worked three weeks earlier while Melodifestivalen and its audience were still finding their feet.

When we move to the final two weeks with Andra Chansen and the Final, new rivalries and storylines will develop and be developed, with the running order part of the picture that will enhance the plot lines. Time will tell who dominates the headlines come March, but what will dominate the headlines is clear. Melodifestivalen.

The Immediate Impact of Running Order

The fine control that SVT has over the running order undoubtedly help to make it Melodifestivalen as exciting and fascinating as it is. It also has a statistical impact. Looking back through the last four years of history (since each heat was seven rather than eight songs) the stats tell a clear picture. 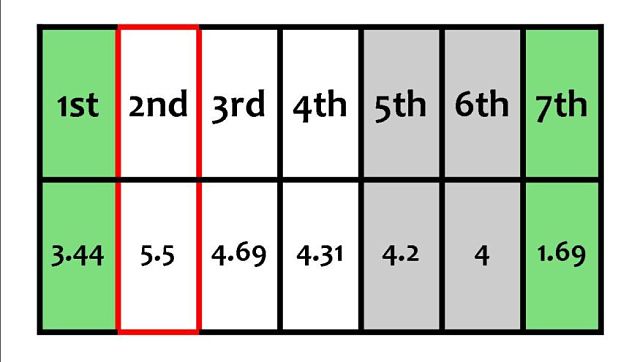 Songs drawn first, and last have a much greater chance of qualifying. On only three of the sixteen occasions since the switch to seven song heats has a song drawn last not qualified directly to the Friends Arena final. On those three occasions the songs in question finished 3rd and went to Andra Chansen. Loreen with ‘Statements’ was the only one not to make it to the Final either direct or via Andra Chansen.

We also see that, just like the tradition of the Eurovision Song Contest, being drawn 2nd is a curse at Melodifestivalen. In keeping with the sawtooth approach to SVT production with diversity central, the song drawn second more often than not brings down the tempo from the high-energy opener. John Lundvik’s qualification from 2nd place last year was only the fourth in the entire history of four heat Melodifestivalen – with 2011 being the most recent occasion.

There is a definite argument to be made for song quality in the process here – are the songs drawn last kept last because the establishment want people to wait for them? In reality TV circles we often use the phrase ’pimp slot’ to describe last place in a running order. This phrase is used because this slot gives these performances a huge chance to catch the audience’s attention (and the opportunity to use larger and more complicated props that need more time to clean up and get off-stage). Sure, the song may be good, but we don’t know that yet. What we do know is that SVT want us to wait for these performances and that alone increases everybody’s expectation.

The Fallout Is Under Way

The first indication of success is often nowadays with the betting markets. Some Swedish bookmakers have already shifted the market considerably. Who would have thought Anna ’non-qualifying’ Bergendahl would be favourite two months ago with Margret ”I don’t want to compete in Eurovision” Jamroży second favourite. I can tell you they definitely were not favourites before the running order was announced. 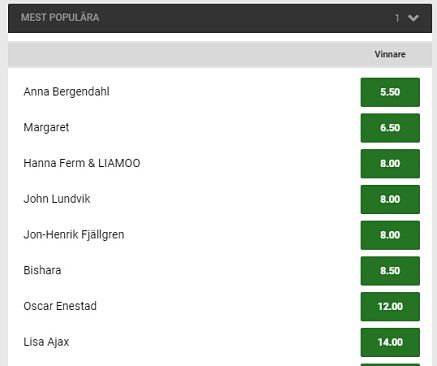 Betting might not be important to many, but its a great proxy for momentum. Songs drawn 2nd are drifting in the betting market, seemingly chanceless. The hype around their performances drops before anybody gets a chance to hear the songs. This is the double-edged sword of a producer-led running order, the public and media will exaggerate any small impact and amplify it.

And They All Lived Happily Ever After?

Speculation will continue from now all the way until the final in March. Every little thing SVT does will impact the show in terms of anticipation, in terms of excitement, but also in terms of who may ultimately win and lose.

All we know for sure is that one of those 28 songs will be heading to Tel Aviv in May, unless there’s a plot twist from Moldova. But what are the chances of that?