The love of Melodifestivalen is far from contained just within the Swedish borders. Interest in Sweden’s selection for the Eurovision has only been increasing, and SVT have made numerous steps to engage with this foreign Melodifestivalen community, highlighted by tonight’s first ever English language commentary of the final. Ben Robertson investigates SVT’s strategy from Stockholm.

Covering Melodifestivalen as a member of the press exposes you to one of the most stressful occasions a music journalist could have. Before each Wednesday heat my role has been to tune in to a Zoom call and listen live to each of the competing songs. We get no breaks and the songs come thick and fast. I’m trying to get my opinion out there to the other side of the Twittersphere as fast and as subjective as possible. The songs whizz by and finding the right words is challenging.

As it’s all new and exciting with fans waiting with anticipation that I may proclaim the next Eurovision winner I get lots of response form these 280 character comments. My Twitter reaction to Dotter’s first play-through had the most reaction, little surprise given her status as one of this year’s favourites. The remarkable thing is though that nearly half of the quoted retweets to my original text were in Spanish.

I have been aware of the huge following for Melodifestivalen from Spain for a long time. Last year SVT’s Gustav Dahlander released data on his Expertbloggen about how many viewers from abroad SVT had on their streaming platform SVT. Comfortably in first place was Spain, with nearly 7500 streams during the 2020 first heat, followed by Finland and the UK in the top three. 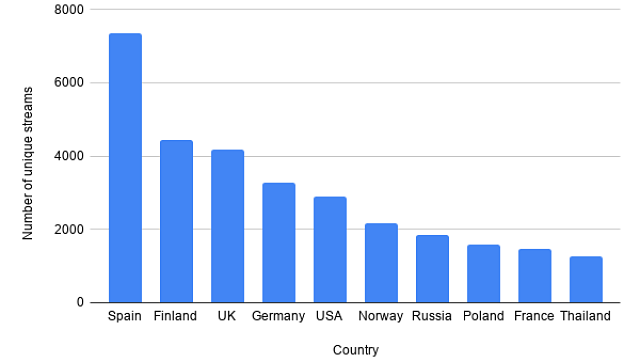 The Spanish/Swedish connection may, as Gustav’s article suggests, be in part due to Swedish families holidaying or living in sunnier climes than the Scandinavian harsh winter, but social media suggests otherwise. Week after week #melfest is a trend in Spanish Twitter (as well as in Sweden and the UK, reaching Europe-wide trending status) and more and more Spanish fans making the pilgrimage to Stockholm each year.

“I’ve been thinking about this question a lot,” comments Esther. “The paradox that exists is with Spanish television and music. We have talent shows here but we don’t have the same space for music or launch platform for bands as we see in other countries. The paradox is that the fans take [Eurovision] seriously but the [Spanish] broadcaster does not in comparison. People love music and people love these competitions.”

And when the Spanish fans love something, they have a passion that is hard to rival. Esther tells me there were many stories about how crazy the travelling Spanish fans felt compared to the laid back and lagom Swedes, comparing the passion of Spanish fans to football supporters. Except unlike the blind loyalty many football fans have for their teams, it is the “modern sound and top quality production” that keeps Melodifestivalen top of their wish list each year.

David also believes that part of the reason is that Spain has not had a large tradition of holding a National Final in recent years. The result of this being that “fans are less interested in the Spanish candidature” and instead are tuning in to the other competitions more. As 2021 has seen Spain choose Blas Cantó internally once more, Spanish fans have searched elsewhere for their fix of new music and competition.

And Spain is far from alone in this.

Going back to Gustav’s blog post, I note that it lists viewership for just the top 14 sovereign nations, but the number of unique streams then approaches 35,000. Comparing this number of viewers in Sweden it is a tiny figure, about 1 % of the total number of viewers. However this number is a huge underestimate. For a start, the number of viewers on the different streams is likely significantly more than one person per stream. Furthermore Melodifestivalen is increasingly being shown in different countries, with Icelandic broadcaster RUV having a history of broadcasting the final and this year YLE in Finland are showing each heat on delay on YLE 1.

2021 has seen Melodifestivalen push a much larger agenda to engage with these international fans. They have duplicated their social media presence to have channels in both English and Swedish, and setting up separate servers on Discord for both Swedish and English speaking fans. Anette Brattström, Project Manager of Melodifestivalen, has described it as “good to reach out with Melodifestivalen to fans outside Sweden”.

The pandemic situation has also opened up the doors for more international press coverage. One example is that in 2021 press conferences and rehearsals are streamed so accredited journalists without having to be there in person. It means that Mello Podcast’s Friday preview is much more informed this year. Also helping with this is the publication of the show’s Contest Bible, which outlines all the facts and figures behind each number, for the first time in the English language.

The big climax of this international push is that for the first time the final of Melodifestivalen will be streamed with an English language commentary team (the commentary is available via this link). Bella Quist, a journalist for Sveriges Radio, will be commentating from Stockholm alongside Olivia Le Poidevin, a BBC journalist commentating from the United Kingdom. 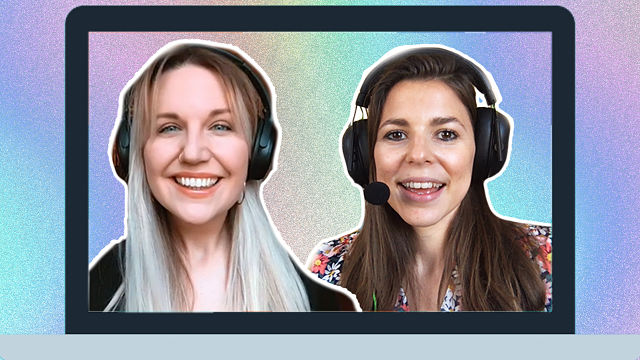 Bella was approached by SVT to commentate, admitting to me in our interview that “they know it was a dream of mine to commentate on Eurovision.” Bella formerly studied at the University of Sheffield in England, and lived on that side of the North Sea for eleven years. While living in the United Kingdom she had numerous pieces published for The Guardian about LGBT issues, children’s rights and of course the Eurovision Song Contest. As the story goes Olivia read Bella’s work, reached out on Twitter, and eventually their love of the same topics blossomed into friendship. That was cemented in 2016 when both met at the Eurovision Press Centre.

When the opportunity to commentate came up, Olivia was the first name on the list to possibly co-commentate, with Bella describing her as her “Eurovision sister”.

Both Bella and Olivia share an experience of being caught up in the Mello bubble from abroad. Bella’s had plenty of Eurovision fans open their doors to her for a good Mello party, with her feeling “like a celebrity” with her status as a full-blooded Swede. Olivia’s Melfest party experiences in the UK have a similar feel, with fans “genuinely in awe” at the level of production that SVT delivers, bringing Eurovision “to the next level.”

SVT wants to share this next level broadcast, their biggest entertainment production, with as many as possible. The English language broadcast means it is now more accessible than ever before, both to fans abroad but also English speakers within Sweden.

Anette Brattstrom described this as a “whole new chapter for how we can reach out with Melodifestivalen”.

I’d actually be tempted to disagree, this is the end of a great chapter of progress.

Branding Sweden In The Song Contest

While Bella grew up in Sweden where loving Eurovision and Melodifestivalen felt like an national obligation, Olivia’s love stems from her parents who used ‘Te Deum’ in their wedding ceremony. I was interested to talk to her about her Durham University history dissertation during our interview, which focused on the way the Song Contest introduced the newly independent nations from Yugoslavia and the Soviet Union after the fall of the Berlin Wall.

“The interesting thing about Eurovision is the chance for countries to grow their identity and speak on the world stage. And how they use song and performance for how they wish to be and to be known.”

Now Sweden is not a country in the Song Contest with a history of sending songs with deep rooted messages, political or otherwise. But Sweden has Melodifestivalen. It is Melodifestivalen that is the key piece of nation branding for Sweden in the Eurovision Song Contest, not the three minutes of the artist representing them.

And while the songs in Melodifestivalen rarely tackle hard-hitting topics, interval acts don’t shy away from issues that differentiates Sweden from much of Europe. I note the interval act for tonight’s final is explicit in talking about both Christer Björkman and Darin openness about their homosexuality. That’s far from a new theme for Melodifestivalen, but one that SVT wants the world to be aware of, as one can easily note whenever they host Eurovision itself.

And the benefits go beyond the message that a country like Sweden may want to project onto the world. Our article last week looked at how Melodifestivalen is a growing platform for many composers and producers to gain experience and expose their craft to the world. This morning Stockholm’s official tourism page sent out the links to watch tonight, knowing full well that, in a hopeful future, thousands will travel to the capital next year for the spectacle.

All these little steps are showing something that seemed unimaginable twenty years ago, when Christer Björkman took the reins of this competition. This isn’t any longer just a show for Swedes, this is the show where Sweden shows itself to the world. His journey onwards to the project creating the American Song Contest is one internationally many Swedes have made in the past twenty years, and one many more will do in years to come.