Melodifestivalen, Angry Songwriters, And Directors In The Spotlight Written by Ben Robertson on March 6, 2021 | 5 Comments

Sweden’s Melodifestivalen has in the past two decades led the way in terms of revolutionary ideas in the Song Contest. This year’s edition has seen the art of stagecraft get a bigger focus than ever before. Ben Robertson looks at the reasons why, and how it’s forecasting a new era of Swedish dominance in the Song Contest.

The casual viewer would never notice the change.

Because of the world we are, in all Melodifestivalen shows are being hosted from the same Stockholm location, and only the most essential of people can be there. Delegation sizes have therefore been cut. One of the groups that is not welcome on site this year are songwriters. We are used to the image of songwriters around the artist waiting nervously for results in the green room. But even last year that ended, with just the artists being present for the moment of truth. This year they aren’t even allowed in the building.

That songwriters are in less of the focus this year again has caused much outcry. Linnea Deb, a songwriter responsible for over 20 Melodifestivalen entries including two winners, reacted to SVT that as songwriters they are getting “less and less status” in the programming. Linnea reasons that, as Melodifestivalen is a festival of new music that they are an essential part of the programming and need to be celebrated more.

The criticism also comes from Ingela ‘Pling’ Forsman, a legendary songwriter with three wins to her name, who returned as a songwriter of ‘Den Du Är‘ after a seven year hiatus from Melodifestivalen. In speaking to SVT she argues that “many viewers believe that the artists write their own songs”, and that the show should “notice the songwriters more.”

In response to this, SVT’s Competition Producer Karin Gunnarsson claimed that the result from heat one of showing the composers “did not work out as we had wished.” Karin explains that the production team felt that it didn’t “lift the songwriters as they desired”, and that “we are still working to find a solution.”

The irony of this is that while songwriters have been getting less status, another branch has been getting much more.

While You Wait For The Reprise

I watch back the first heat of Melodifestivalen and watch back the results announcement. The first artist to qualify to this year’s Melodifestivalen final was Danny Saucedo. After his announcement it took nearly two and half minutes for the backstage crew to frantically hook up Danny’s microphone and drag out his enormous 5 x 5 metre cube of cardboard boxes to be ready to perform. To fill this dead time, SVT played an interview with Danny, pre-recorded, where Danny tells us all about how much it meant/would have meant to go through to the final.

However Danny only speaks for a short section of this video. Instead there are quotes from other people behind his number. But not the songwriters. We hear from Fredrik ‘Benke’ Rydman, the director of the number, Alexander Ankarberg, the set creator and Lotta Furebäck, the artistic competition producer from SVT. The video talks very much about the logistics of the visuals in the number, from how Danny’s prop works to where the vision for the number came from. Fascinating, yes, good Saturday night primetime entertainment just after the euphoria of going to the final, perhaps not.

But it’s this juxtaposition that is frustrating here for songwriters. Their art and their recognition has been sidelined in place of these new kids on the block. There is no denying that these individuals and their role is vitally important to the competition, yes, but nothing without the song in place. It also does little to act against the prejudice against Sweden from sections of the fan community, that Swedish entries are all style over substance. Does the Sweden of today care more about the production of a three minute stage number rather than the production of a three minute song?

One Trend Up, Another One Down

If we go through Eurovision history for the last twenty years, we can see that the number of Swedish written songs in the Song Contest is actually on a downward trend. The peak came in the middle of the past decade, when nearly one in four songs in Eurovision had a named composer or lyricist from Sweden. This number is likely to be an underestimate if we include production as well, as there are examples of Swedish production companies making the final edits of Eurovision songs, with Albania’s ‘Identitet’ one such example. 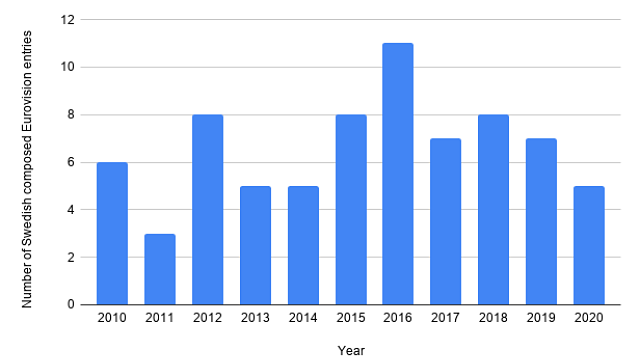 A graph to show the number of Swedish written entries in the Eurovision Song Contest, 2010 to 2020

But while the number of Eurovision songs written and produced by Swedish songwriters has perhaps hit its peak, the same can’t be said for the people creating the stage show. Sasha Jean Baptiste is probably the name most recognised by the fan community nowadays, and has been responsible for at least three Eurovision numbers each year since 2016. She’s not alone however, and there are numerous other Swedes working abroad to create three minutes of wonder. There’s examples on various Eurovision delegations, such as Tine Matulessy and Mari Ryberger who helped with North Macedonia in 2019, or many of the Swedish faces that worked on Malmö and Stockholm, and consequently help make both Kyiv and Lisbon a reality.

Part of the reason for this growth has been the opportunities that hosting Eurovision twice in a decade has provided, and more delegations have become familiar with Swedish experts in this field. Another reason is that the excellent stage productions that often accompany Swedish entries have certainly gathered attention overseas. That is how Benke Rydman got the gig to work at Eurovision this year even before Melodifestivalen is over, as Ireland have asked him to plan their number for Rotterdam.

Benke is the man behind the routine for both Måns Zelmerlöw’s ‘Heroes’ and Eric Saade’s ‘Popular’, as well as opening numbers in both Eurovision 2013 and 2016. Yet in speaking to me he doesn’t highlight any of these as a career highlight, instead choosing to pick out his routine dancing alongside a robot from 2018. Speaking to Benke, he explains that his kind of show has plenty of “fantasy, imaginative parts” with plenty of “inventive stage shows, without the need for expensive technology”. While the robot below would be expensive, it is the interaction of man and machine that creates the fantasy and imagination.

This imagination explains many of the creations that Benke is responsible for. Both his numbers in Melodifestivalen this year, that of Danny Saucedo and Eric Saade, are unique for the contest. This year without the need of entertaining a live audience, Benke has chosen to hide both artists in an enclosed space for most of their stage performance. This is intentional, he doesn’t want the public at home to “notice and miss out on the audience” which “creates something else” to add to the number.

Benke explains how the process to create a concept for a number works to me, using Eric Saade’s performance of ‘Every Minute’ as an example. Benke comes into the process after the song has been written. He insists on listening to the song himself first to “get a first impression and vision” for what could be done with the song before only after listening to the artist’s ideas.

For ‘Every Minute’ Benke noted a “slightly darker tone” in what was on paper a happy song, and took him to the vision of a laboratory, and a place where one can “look at people projecting things they aren’t”. With that vision in mind, the idea of a black room with the solitary white square as the performance space emerged, to create a very “naked” performance.

Benke though steps back from the suggestion that the designs for this year have tried to replicate the look and feel of music videos, and that this is the direction that Eurovision staging will take.

“I don’t necessarily feel that is a good thing. We just wanted to create a nice effect, [a music video effect] was not my intention.

“Next year with an audience there will be even more life and we will go back to that style, with the risk of being live.”

Those comparisons to a music video are not ones that the Eurovision community use as a negative though. Yes, Benke is correct that there is danger that the risk, the buzz, the emotion of the live performance is lost, which is essential to make a great Eurovision number. But the music video comparison is because of the amazing attention to detail and perfection that so many modern Melodifestivalen numbers have.

Over the last decade, there’ve been times in early March when it has felt that Sweden could have many different songs that could go all the way in Eurovision. I feel that’s been lost in the last couple of years. What Melodifestivalen does have today instead is visual production value to many of this year’s finalists that could be Eurovision winner quality.

Do You See Or Hear A Song?

Even Benke finds it somewhat arresting that he gets to speak to the nation after his song qualifies. While he admits it is nice for his work to be recognised, and for people to realise the great work that goes behind the creation of a number, he feels that perhaps this should have been combined with the thoughts from the songwriters as well.

The editorial decision from SVT to record a short video about each song (all twenty eight songs will have such a clip, we only get to see those from the directly qualified artists) and only focusing on the visual side of the production is flawed. This looks at the secondary effects while bypassing the primary cause behind them, even Benke’s elaborate staging are created after the song has been written – not before.

But while the decision was flawed, the step to highlight the work behind the scenes is admirable. After all it is the production quality behind the visuals of each song that Sweden now excels in, and this promotion will only help them create a well deserved platform at home and abroad. Many Melodifestivalen viewers will recognise composers like Thomas G:Son, Bobby Ljunggren and Fredrik Kempe instantly, all because of the spotlight SVT gave them. Will the same happen with the rest of the team behind an artist’s performance in the future?

I can’t recall ever, in any national final from any country, seeing the producers of the number itself actually getting recognition. Is Sweden once again the country leading the way forward in recognising that both the aural and visual elements of a song are needed to make it work in the modern day Song Contest? Will, in a future Song Contest, the directors of each number be listed alongside the songwriters in the official programme?

5 responses to “Melodifestivalen, Angry Songwriters, And Directors In The Spotlight”