I was fortunate enough to be in town for the Opening Ceremony in Katowice this afternoon. As press we were shepherded up to the gods of the Silesia Theatre to watch proceedings take place. We got to hear the Gromee written common song for the competition as well as local boy band 4Dreamers.

There was also the Gift Ceremony, where each act gave a gift from their home country to a randomly drawn artist. Imagine it as secret Santa, but without knowing who your present is for.

One of the other features of the Opening Ceremony was the draw for the running order. The running order is only partially random. The host country, opening song and closing song are drawn at random, otherwise the songs have their positions selected by the host broadcaster in combination with the EBU.

We now know that running order in full. 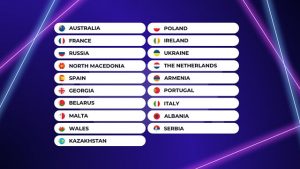 I look at what happened last year as an example that running order may still have impact in who eventually wins the competition, with Poland winning from last place. In total five winners from the competition’s 16 edition history have come from the final slot. Arguably most striking is the statistic that only two songs have won from the first half of the Junior Eurovision running order, ‘Bzzz’ and the inaugural winner ‘Ti Si Moja Prva Ljubav’.

If anything, this trend suggests that the winner of Junior Eurovision is more correlated to running order than even the larger Eurovision Song Contest. Most of the running order has been producer influenced from 2014, and since that time we only have one winner outside the last quarter of songs performing in the competition.

Absolute position, is the not the only impact of a running order, however the above stats suggest it is most important.

My model attributes two less obvious factors into consideration. The first is side-to-side comparison. The argument being if you want to win the competition, you need to be obviously better than the songs drawn either side of you. That’s easier if you have a song that has similar elements to those around you, but you do them better. Producer led running orders usually make this effect rarer, which is a shame as it can naturally overcome the running order bias.

The final attribute is what I call the crescendo effect. A producer planning a running order will create moods throughout the 19 songs and there will be peaks and troughs in excitement through the show. You want to be riding the wave of the peaks in crowd energy to get the most impact, rather than in the doldrums after the fires have burnt out.

My model from last year’s competition highlighted Poland as the big running order winner. The three others I highlighted were Malta, Australia and Georgia. The latter two were in a side-by-side battle where Jael’s great vocal stole the show and gave Australia a huge jury vote lead. Malta, drawn 19th out of 20 but also benefiting from side-by-side and crescendo effects after Wales, came in 2nd in that same jury vote.

The following table shows what I think of each of the songs and their boosts or drops depending on purely the running order. Based on the statistics above, I have doubled the weighting of absolute position as it appears to have a huge effect in the winner of Junior Eurovision through history. 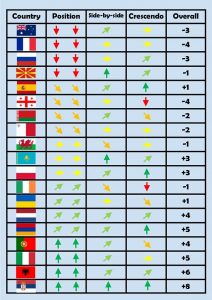 I do give Serbia the top running order boost after their draw last. The song has such huge potential to be an epic ending with the rousing feel and false ending. I also note that the final four songs are all sentimental ballads of different styles, a saw-tooth running order this does not appear to be. That means there is much competing for side-to-side judging here, so all score highly in that criteria. My expectation is that Serbia’s ‘Podigni Glas (Raise Your Voice)’ has the most powerful message and vocal and may appear an obvious winner after that run of songs. However all four have a chance if the performers can shine above and sound better than the rest.

Just before these tracks I’m seeing another side-by-side comparison between The Netherlands and Armenia. I’m expecting bombastic staging with backing dance ensembles from both, and even though they are different musically they will be similar in presentation. A clever gimmick here or a wink at the camera there might be enough to raise one against the other in the who-can-choreograph-my-way-to-charm game.

Poland and Kazakhstan in the middle of the running order should be happy. There’s a clear ramp up from Belarus to Malta to Wales that increases the tempo and energy in the hall. The Kazakh Disney-esque track has a huge production and if the live vocal matches I can expect one huge standing ovation for the 12-year-old. The audience will be primed ready to boogie down to Viki and the host crowd cheers will be just a few percentage points higher. I slightly edge Kazakhstan on the side-by-side for now, but Viki’s stage show is something of a secret at the moment.

In the top half of the draw, we see Spain as the only country who can take away positives from the running order placing. Mila Moskov and the track ‘Fire’ has a huge build to it and provides Melani from Spain a springboard for her operatic vocals to soar across the arena.

The Elephant In The Room

Yes, I can go through my analysis and pick out countries that may get a little relative boost because of the way the songs lie. However the story of this running order is not in those that have a boost, it’s in those that don’t.

Poland is going into this competition as one of the hottest favourites, with 3.5 million YouTube views and counting on the official video. Fan polls and top of top videos have been suggesting that France and Spain are the two countries also in the mix, and both are showing the show to multi-million audiences back home on their primary channels. The latter is key for scoring big in that online vote. Spain are drawn 5th while the French entry performs 2nd on the night.

Producer led running orders over recent years we have seen a trend towards placing favourites later in the show. This running order is very much the opposite, with much of the favoured big hitters in the first half of the show.

Running orders are more complex than putting favourites at the end of the show. One must also consider the logistics of staging each act and their props, colours, lighting, gimmicks and so on. There has been a backlash online to the running order, and this outcry – justified or not – is a fundamental issue with any producer-led running order. Somebody, somewhere, will accuse you of bias for just doing your job.

Going into rehearsals I will say this. The general consensus is that Junior Eurovision this year is far stronger in its first half than its last half. If that appears true with the live performances, we may have a show that feels very similar to the Grand Final of Eurovision 2015…which had much of the mid-table dragging out in the second half.

It is the random draw elements I want to finish on. There is something beautiful about them. Jordan Anthony representing Australia is head and shoulders taller than most of the adult press, never mind the young artists. His huge height difference will unlikely be noticed if he’s not being compared to other entrants before him. Some say his song is a bit slow to open, but actually I think it grows warmly and set a great positive mood to kick start the competitive. Likewise ending on a Balkan ballad isn’t typical for a producer led running order, but the false ending and powerful message may create the most iconic moment of the night. In a Junior Eurovision year full of youth empowerment messages, it seems poignant to end with one of its most dramatic.

Sometimes randomness does things no human would ever do…this show is far better for that.