On Monday 19th November in the BelExpo exhibition centre in Minsk the Opening Ceremony for Junior Eurovision 2018 took place. As customary, following the show the show producers and EBU have now agreed on and published a running order. As also customary, we asked ESC Insight’s Ben Robertson to investigate.

This year’s running order for Junior Eurovision was predominantly decided by the production team, with some minor exceptions. Firstly the position of the host country was randomly drawn, and Belarus’ Daniel Yastremski performing position eight. Secondly a draw was to decide who would open the show (Ukraine) and who would close (Poland). Unlike in the Eurovision Song Contest, here at Junior Eurovision there has been no drawing for first half and second half of the show, so all the other countries could have been placed anywhere from 2 to 19 (8 of course was taken).

I always base my running order analysis on three factors:

As Junior Eurovision is the place to try new ideas, I’m going to try and present my opinions in a graphic style this year. In the image below you will see my thoughts on the running order position for each song, based on my criteria. 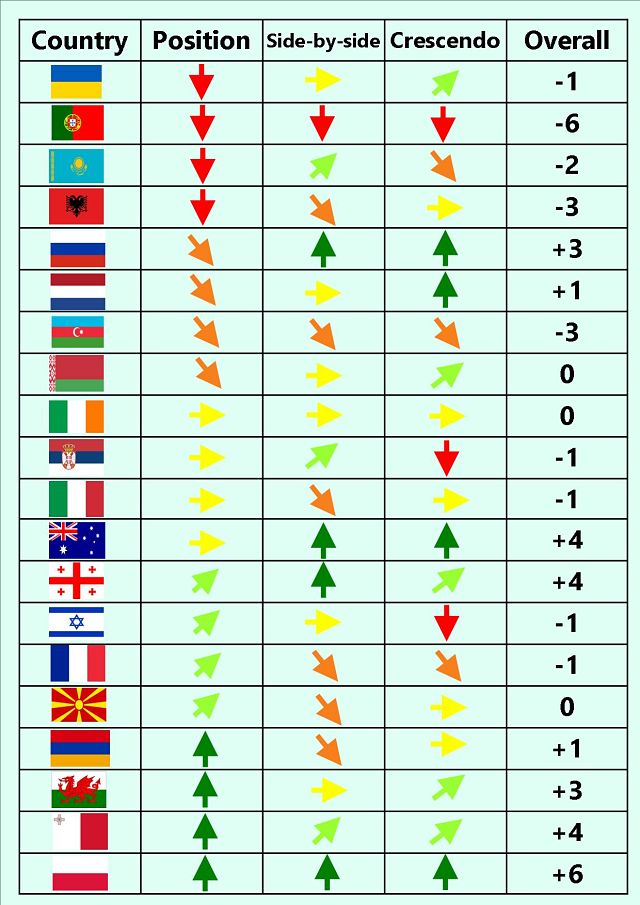 It’s far too easy to congratulate Poland on drawing the prime position for ”Anyone I Want To Be”. I feel this track easily bounces around as a great show closer. Poland feels like it has more energy, but is actually a more accessible lower tempo compared to Malta previously (80 compared to 100) and sounds far more empowering for it. That said, I think Malta’s position at second last isn’t just crescendo fodder to Poland, ”Marchin’ On”, to its credit, has a rich sound and complements what should be a very strong back half to the show.

Also showing up well in my analysis are both Australia and Georgia. I think there is huge potential for something to stand out well on Sunday’s show between these two. Both have big vocals and I believe are more accessible than the songs surrounding them. The best performance of these two here could do better than expected.

I feel quite bad for picking out Portugal here as blatantly as it appears in my graphic. Number two has the history of being Eurovision’s most failed position, a history that despite not existing in Junior Eurovision, is hard to shake off. Sandwiched between two pre-contest favourites in Ukraine and Kazakhstan, the Portuguese track is such a slight little ditty that it may sound out of place when compared to the intimidating vocals from the East.

I similarly highlight Albania in-between Kazakhstan and Russia, with Russia’s pop track in comparison favourable for accessibility and, in Minsk, probably picking up some favourable support as well. Azerbaijan’s low score in my table is due to the smaller sound after the big lift at the end of the Dutch song ”Samen” and that performing before hosts Belarus easily deflects attention from it during the show itself.

The One I Don’t Really Know About

The quirks of Junior Eurovision mean that first and last place in the show are selected by random draw during the opening ceremony. Poland has already been discussed and will be very happy with their choice. Ukraine is a very unnatural opener to a Junior Eurovision contest in this producer led era, but that is the beauty of the random draw.

”Say Love” is an aggressive song. It is abrasive. It stirs emotions. None of that is necessarily a criticism of it. However I note from my recent appearance on Juke Box Jury that many people have a perception of Junior Eurovision. That word ’Junior’, and the age of these performers, influences our opinion of what to expect.

I suspect few would turn on their TV for Junior Eurovision and expect song no. 1 to be an anti-war chant. I can’t work out if this is a positive or not when it comes to scoring, but remember I was similarly befuddled by ”Mzeo” closing position in 2016. Of course ”Mzeo” won the show in Malta that year, after blowing everybody away with an amazing performance.

With ESC Insight, we have previously run analysis which makes us incredibly confident that running order does have an impact in both Junior Eurovision and the Eurovision Song Contest. This impact exists for both juries and voters at home.

However the actual impact of running order is small. There is a narrative of a show that helps tell the tale, but the performers on stage still sell the story. Good performances do well at Eurovision and that performance is always the biggest factor.

Do you agree with my analysis this year? Who do you think has got the best running order for Sunday’s show? Please leave your comments below!