Taking Flight: The Upward Trajectory of Australia At Eurovision 2019 Written by Sharleen Wright on May 18, 2019 | 1 Comment

As the anticipation builds for the Eurovision Song Contest 2019, anticipation is also building around the Australian act, the popera style, and the unique staging. Sharleen Wright looks at the Kate’s journey in the world of the Song Contest.

Leading into song 9 at the first-ever ‘Australia Decides’ National Final, there was a sense of anticipation on the entry of indie-darling Kate Miller-Heidke, both from those present in the arena and those on the live television broadcast. Treated to some of the best talent within Australia, including the worldwide known drag queen Courtney Act and current chart-topping Brisbane band Sheppard, the standard was high.  Just as the lights went up, most of the general public gasped in delight at the tall shadowy figure of the ice queen scaling the high notes of her entry ‘Zero Gravity’.

Despite momentum for underground dance group Electric Fields, it seemed that the stars were always meant to shine on Kate – a clear favourite of the production team who were glowing with praise at having such an entry in their selections.  Surrounding her with a series of clips of the high camp and spectacular staging from Eurovision, framed her staging nicely.

Even though it was the clear favourite at Australia Decides, most fans – including myself – were quick to dampen Australian expectations at the much-larger 2019 Eurovision Song Contest. ‘We’ve seen this before, and it’s not won yet’ was the general consensus; from the pop-opera vocal stylings to the large-scale dress.  Comparisons to Elena from Estonia 2018 were abound.  How could Australia, now seemingly going for the big prop novelty stage act, possibly work?

A History of Kate

The pop-era genre is nothing new for performer Kate, who has been performing a mix of contemporary pop, folk and opera since for over a decade. She trained at the Queensland Conservatorium as a classical singer and has performed in the genre with the English National and New York Metropolitan operas.

Her breakthrough in Australia however came in 2009, when she reached the top of the charts and double platinum sales for her hits ‘The Last Day On Earth’ and ‘Caught In The Crowd’.  It was used in countless television soundtracks and enjoyed heavy rotation on local radio.

It has been hard to avoid her presence in the music and arts scene since.  From holding a role as Musical Director at the Australian Performing Rights Association, writing comedy songs for fellow friendly acts at the Adelaide Cabaret Festival, acting on national television and now composing Operas and also the hottest musical in Australia, to a stage adaptation of cult movie ‘Muriels Wedding’, Kate has a lot on her shoulders.

She decided to submit her song for the national selections after being inspired by Nettas’ winning song ‘Toy’ last year, where she recognised that you can produce innovative music and still bring fun to the stage.

A History Of Australia At Eurovision

Australia’s history with Eurovision begins with the launch of broadcaster SBS in 1983.  Largely aimed at the European migrant community, showing the contest allowed those expats to keep their connections to the homeland by watching the event that they both grew up with and to discover new music in their native tongue.

Whilst there were some haphazard attempts to localise the Contest over coming years, we can fast forward to 2009; the year in which the broadcaster decided that with growing interest and audience numbers locally to send a team to present the commentary from on the ground. Australians loved the combination of comedic and highly appreciative views from our own voices and ratings swelled.  The push to compete on the ground was greater than ever, and finally in 2014, the broadcaster was asked to contribute an interval act to explain the unique love and relationship Aussies have with Eurovision.  2015 saw Australia compete for the very first time, with a fifth placing Guy Sebastian, then Dami Im (second in 2016), Isaiah (2017) and Jessica Mauboy (2018).  Think whatever you like about these acts, all achieved qualification to the finals on the Saturday night on talent alone with little diaspora or cultural relationships to rely upon for points.

Whilst SBS carries the Eurovision for broadcast, the logistics are handled in most part by an external group known as Blink TV.  The production company have long and wide-ranging experience in both the television and arts fields, having produced a comedy special for Adam Hills, an concert special of Kylie Minogue’s Homecoming ShowGirl tour, a large number of Australian comedy panel shows and also Junior Eurovision for the other Australian Public Broadcaster ABC-TV. 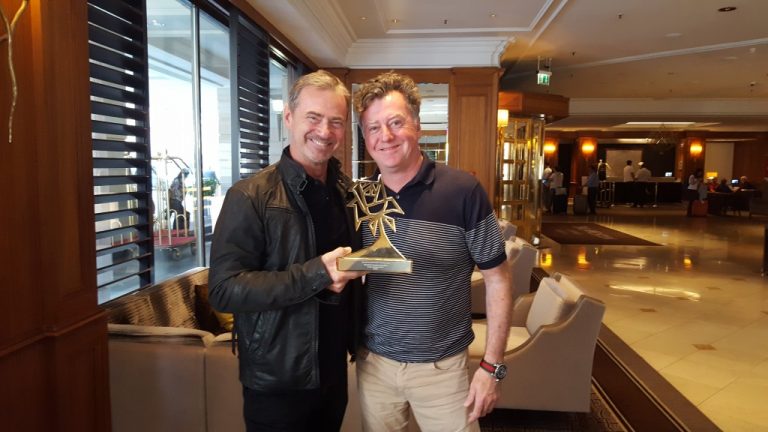 Head of Delegation for Australia since 2015 has been Paul Clarke, also lead director of Blink TV.  His experience dates back to the 1980s as a journalist and TV presenter, then head of the arts and entertainment on ABC-TV as a writer, producer-director and co-creator of hugely popular music series ‘Recovery’ and ‘Spicks and Specks’ through the 1990s and early 2000s.  Simply put, his experience tends to understand both sides of what is required in regard to the trio of PR story, music and the televisual experience; thus Eurovision is his perfect playground.

Having this team at the helm always guaranteed that Eurovision relationship with Australia would be a serious one, moving away from being the regularly portrayed kitsch-fest that and negative attitude on the Contest was borne of the decades of Terry Wogan commentated broadcasts carried by SBS.

One thing is certain, when Australia joined, they were always going to mean business.

Stone In My Shoe

The Australian team remained focused but somewhat quiet over the promotion period leading up to this years contest.  ‘Significant changes’ were promised for the stage show with the team working hard behind closed doors and were tight-lipped on anything further.

Miller-Heike’s promotions were in the main locally-based TV chat shows that combined mentions of her participation alongside new dates for her musical ‘Muriels Wedding’.  Internationally, she participated in Eurovision In Concert, due to the convenience of her travelling to nearby Israel for the shooting of the dancing postcard.

Further media appearances were suspended on her return from Europe in April due to a highly infected blister caused from the postcard dancing in inappropriate shoes, seeing her spend a week in hospital to recover.  Question marks hung over her health and PR momentum for the show hit a wall, with betting odds for Australia blowing out at a whopping 140/1, the highest for any Australian act performing at Eurovision. 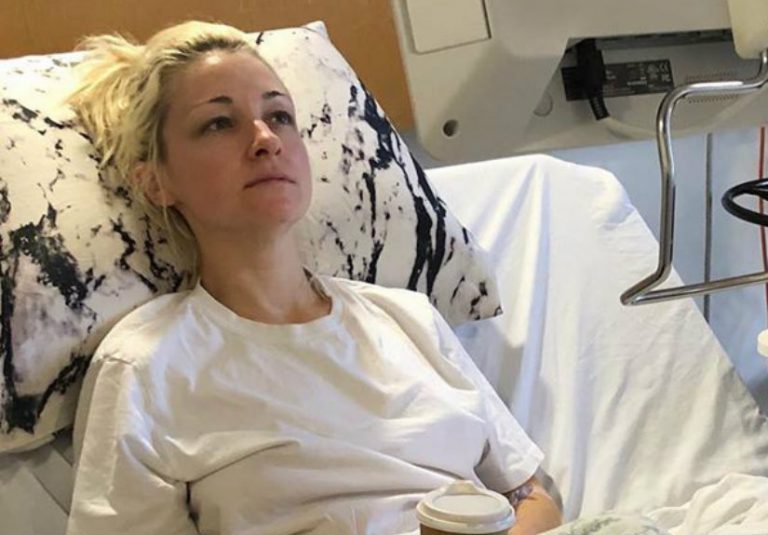 Kate rests up in hospital prior to Eurovision

Nothing Holding Me Down

Ditching the giant blue dress for which she had to scale a ladder to attach to her waist, she is now resplendent in a fairytale white sparkly dress designed by the same team that were responsible for Dami Ims’ unique flowing dress in 2016 that now hangs in the Australian Music Museum in Melbourne as a significant moment in the history of the nation.

The static feel of the national final stage show also went the way of the dodo, replaced with an ambitious choice to replicate and maximise the element that did draw positives from fans – the inclusion of the Strange Fruit circus team on their bendy poles.

It is this component that ultimately now has people across Europe captivated, with viewers kept bewildered by exactly what they are seeing – an overlay image of the world hiding the surprise of the flowing movements of Kate and her two backing bendy pole ‘dementors’ until a minute into the song.  This wonder is also felt within the arena audience, and the moment where she is wheeled onto the stage continues to draw audible gasps from those in attendance. 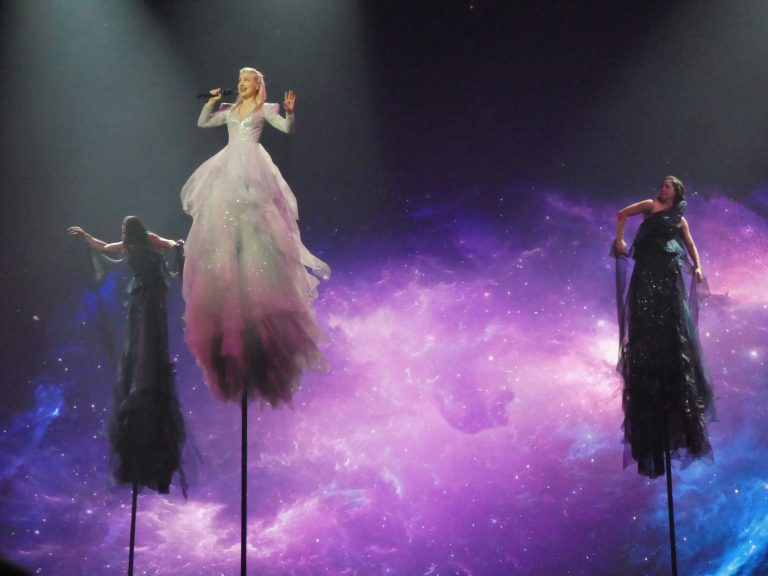 Clearly the unique staging has caught a wind of attention in a year where many of the songs have failed to produce as greater sense of wonder, and in turn, momentum at the crucial part of the race to win Eurovision.

Judging by the coverage it has gathered from mainstream, many are excited for the novelty, but then stay for the narrative. ‘Zero Gravity’ is essentially an auto-biographical tale of Kate’s experience of post-natal depression following the birth of her now 3-year old son Ernie. It makes sense that her own partner and long-time collaborator Keir Nuttall then shares the writing credits on the song; telling of their private journey of emerging from a dark place to literally floating on air, throwing off the burdens to achieve a sense of weightlessness.

The staging concept finally makes sense, leading the general public to be left in a sense of wonder in how it can be achieved – along with utmost respect to control the apparatus whilst delivering flawless vocals on all the rehearsals. And there is now a narrative we have seen play out over the past three months which has captivated everyone from the BBC to Ukrainian television for coverage.  All the elements created by the Australian Delegation are working in harmony, and the momentum seemingly is peaking just at the right time.  In the evening before we decide, odds have dropped to as low as 6/1, holding a second favourite status leading into the 2019 Contest final.

Whether it’s enough for a win, we shall see shortly.

One response to “Taking Flight: The Upward Trajectory of Australia At Eurovision 2019”