After days of rehearsals, weeks of promotion and months of preparation, tonight the first Semi Final of the Eurovision Song Contest 2019 will finally air. Ten acts will qualify for the Grand Final, while for an unfortunate seven, the journey ends here. But there’s more to a Eurovision show than the results – here’s John Lucas with our annual guide to what you can expect this year…

Our Hosts In Tel Aviv (Eurovision.tv/EBU)

If you’re the kind of Eurovision fan who pines for the pre-1999 days when every country was forced to compete in their national language, tonight should prove to be an absolute goldmine. Performing in your mother tongue is well and truly back in fashion at Eurovision, and in this semi alone you can expect to hear songs in English, Georgian, Hungarian, Icelandic, Polish, Portuguese, Serbian and Slovene. A polyglot’s dream! 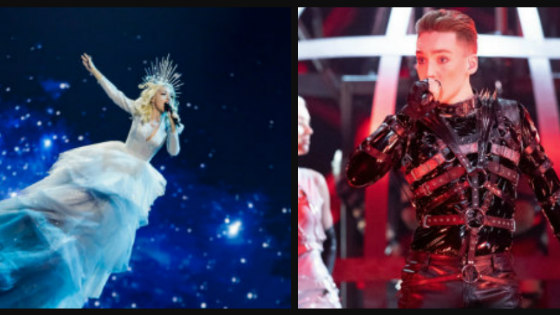 One of these things is not like the other… (Eurovision.tv/EBU)

Speaking of those naughty Icelanders, the costumes this year are as delightfully bold and eccentric a batch as we can remember seeing in recent years. In addition to Australia’s Kate Miller-Heidke doing her best impersonation of Glinda the Good Witch from Wicked, Poland, Serbia and Greece are also pinning their hopes on a statement frock, while Portugal’s Conan Osiris is rocking an oversized kimono that wouldn’t look out of place on a Paris runway. Meanwhile, Cyprus are following Iceland’s example with a dominatrix effect, Finland’s Sebastian Rejman is the visual manifestation of a mid-life crisis in his alarming two-tone skinny jeans, and Belgium looks like he’s just been literally parachuted into the arena. It’s one way to skip the airport queues I guess…

From Turkish quiz show host to instant Eurovision icon, San Marino’s Serhat went on quite a journey in 2016 – one that was unfortunately cut short when his remixed disco anthem I Didn’t Know failed to qualify for the final. This year he’s back again and fully embracing the camp, with his maddeningly catchy Say Nah Nah Nah receiving the honour of closing the Semi. Can he overcome stiff competition, probable jury drag and a near total lack of stage presence that almost becomes compelling in its own surreal way, to finally get his revenge? Predictions are mixed here in the hall, but even the most hardened cynic would struggle to begrudge him his overdue moment in the sun. Go for it Serhat! 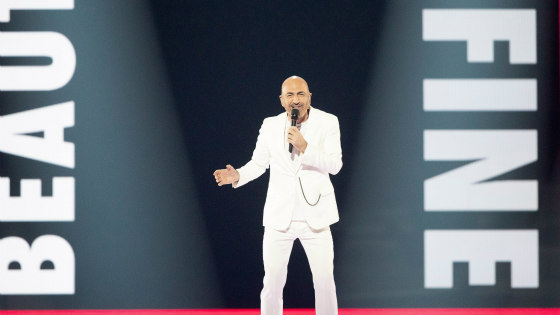 The man, the legend… (EBU/Eurovision)

Madonna’s planned appearance at the Grand Final on Saturday may still be up in the air, but for this Semi final we’re due to be treated to a double helping of groundbreaking divadom, as past Israeli winners Netta and Dana International take to the stage. Last year’s winner will be reprising Toy with an upgraded stage show and a small army of backing dancers, while for reasons best known to herself, Dana International will be performing a cover of Bruno Mars’ ubiquitous chart hit Just the Way You Are. Where’s Charlotte Perrelli when you need her?

Speaking of groundbreaking divas, the old school fans in the Press Centre were delighted last night by the inevitable ‘Eurovision through the years’ montage, which prominently featured the UK’s much missed four-time Contest hostess Katie Boyle. Now, this occurs during the part of the show when the BBC generally tends to cut away to some pre-filmed skits or interviews, so we hope the little tribute isn’t missed by UK viewers. Let us know if you spot it tonight.

Stay tuned to ESC Insight for a thorough post-mortem on the results online and on the ESC Insight podcast. Check out the latest version of the ESC Insight newsletter here, or subscribe here to receive regular updates direct to your inbox.