Mariam Mamamashvili won 2016’s Junior Eurovision Song Contest last Sunday for Georgia. Her result was decided by a combination of adult juries, kids’ juries and three expert jurors. With the split scores now revealed from the EBU Ben Robertson takes a closer look to reveal the impact of these changes and what the results tell us about the new voting process.

The Voting Impact of the Expert Jurors

The voting sequence to decide the winner of Junior Eurovision 2016 was very tense. As the first few countries gave Georgia their twelve points the delegation was facing what appeared to be a landslide victory. As the voting continued Georgia was pegged back somewhat by the Expert Jurors in the Republic Hall of the Mediterranean Conference Centre. Furthermore, Georgia only place sixth with the kids’ juries, meaning that as the final few points were announced Mariam was left nervously waiting for all the other countries to fall short.

In the end a margin of only seven points separated first and second place. Such a tight margin is remarkable even by Junior Eurovision standards. The close result is more remarkable when we note that there were 37 different voting groups in this year’s competition rather than just one from each country.

What we can say is that the inclusion of the expert jurors did not directly impact on the result of the competition. The following table shows the result from the combination of the adult and kids juries, and the extra points awarded by the three expert jurors. 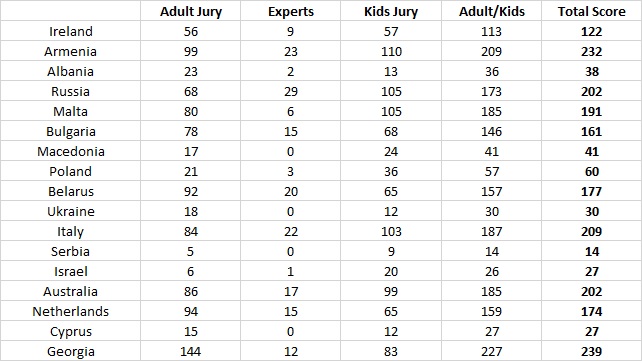 Without the Expert Jurors being involved Georgia would have held on to victory with more than the final seven points, instead ending up eighteen points clear of Armenia in second place. In addition Italy would still have taken home a trophy for placing third, squeaking ahead of Australia and Malta by two points.

In terms of the result of the competition the Expert Jurors did little impact. However, what we can note from their voting is that they made the competition far closer. Expert jury favourite Russia caught up ground from poor scores with adult jurors to be in contention when in 2nd place with the kids’ jury. Armenia scored eleven more points than Georgia from these three jurors, which certainly made the end result extra tense. 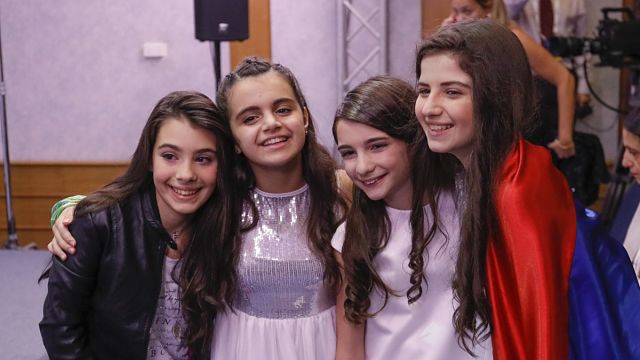 Thanks to the adult and kids’ juries awarding ninety-two percent of the performers’ final score on Saturday night’s dress rehearsal, unbeknownst to the expert jurors they been handed the role of kingmaker with their eight percent of the score. Going into Sunday’s show, it was either Georgia or Armenia – all the  others were too far back to catch up.

Despite voting on a different show the correlation between the combination of adult and kids juries and the expert jury is very high, +0.83. A number close to one would suggest perfect correlation, so this number suggests the expert jury was voting similarly to the jury groups watching with the competing broadcasters.

Despite the huge mathematical correlation the largest misfire between the two groups would have been with our eventual winner, only scoring an average of 4 points from each expert juror compared to 8.47 from the adult juries. Positive correlation was maintained but the one song dragged back was the one song too far in front after Saturday night’s performance. One other stat to consider is Jedward’s score to the Irish entry. Jedward awarded Zena Connelly five points, the most of any of the expert jurors, by one point. Not enough for anyone to suggest blind loyalty to their home nation, but enough to look suitably favourable.

Differences In Taste Between Young And Old

The eventual difference between the adult and kids juries regarding in particular the Georgian song ‘Mzeo’ suggests there were big differences in opinion between the two juries. Such an opinion would be unfair. Correlating the adult jury result to the kids jury results also finds a correlation of +0.83, suggesting strong overall agreement between both jury groups. This was very much true at the bottom end of the table where the bottom seven songs where well adrift with both juries of Ireland that finished in 10th place.

The below table shows which songs placed better with kids juries than adult juries and vice versa. Only the top nine are used as they get enough points from both jury sets to be statistically significant.

For many Junior Eurovision fans these results would be a surprise. The songs to score much higher with adult juries were those that either featured the highly fun choreography (The Netherlands and Belarus) or those songs to feature small children with crazily impressive vocals (Georgia and Bulgaria). On the opposite side of the spectrum more technical performances (Russia and Malta) as well as the older soloists (Italy and Australia) which were rewarded by the child juries.

The conclusion we can make from this is that adult juries are voting for acts with an appeal that looks downwards in terms of age, a very ‘Junior’ view of the competition. Conversely the child jurors are looking for acts with a more technical and somewhat more mature appeal, a more ‘Eurovision’ view of the competition.. There does appear to be a disparity between what adults and children believe is brilliant in Junior Eurovision, and this is something that should be considered for creating a voting system that can balance the latter which should be the focus.

Differences Between Each Country

If we look at previous editions of Junior Eurovision we find very little difference generally between the votes of the Kids Jury. A feature since 2012 was to have one voting jury made up of one child from each country cast votes, which are then summated to make one jury score. In all but one edition of Junior Eurovision the Kids Jury vote was for the winning entry (and on the one time it missed out, that song was placed second). It is no surprise for this correlation to be so strong, as the Kids Jury members voted in the same location as the professional jurors.

Previous studies of Eurovision voting suggest that differences in voting patterns due to age, gender, profession and so on do exist, but are usually quite minor in terms of preferences. The biggest correlating factor between jury members appears to be if they watch the show in the same room or not. While we will always protect that fact that every jury member votes independently, just by being together there appears to be soft influence on each other’s tastes.

Junior Eurovision has for the first time made it possible to test this theory, as now each country has two juries in separate rooms. Sadly, the ages of these juries are different and therefore this is not a perfect scientific study. However as we have already established above the Adult Jury and Kids Jury results are strongly correlated. What we can do is run correlation analysis on each country’s Adult Jury with their Kids Jury. If both juries voted identically there would be a perfect correlation (+1). If the results were completely the opposite there would be a negative correlation (-1).

The following table shows with countries had the highest and lowest correlating adult juries to their Kids jury.

Our figures here need to be taken with a pinch of salt, because the EBU have only revealed 1-12 points rather than the full split for Junior Eurovision, which would give stronger data to analyse. The full split is not being revealed for both juries due to the EBU wanting to protect the identities of the kids juries. However this more rough analysis still can give a benchmark for our conclusions.

The average number of +0.52 suggests in each country the adult jury is correlated to their Kids Jury, but this is not as strong as our previous combined result. There is a spread of correlations across the data set yet all of them exhibit positive correlation.

With traditions such as our old favourite ‘political’ voting rearing their head during all Eurovision voting sequences, it is easy to hypothesise the results should be more correlated from the same country than not. However in conclusion that appears not to be the case and the correlation between juries from the same country is not as strong as one would expect. This is further evidence to back up the theory that who you watch the Song Contest with is one of the biggest factors in what you want to do well.

How Can We Learn From The Voting Data?

Junior Eurovision is over for another year but this new voting system experience is well worth learning from. We have seen that the Expert Jurors did not make any considerable difference to the final vote, as well as assessing how adults and kids have different tastes overall and within their own individual country. The value from a production point of view would and should be questioned as the jurors added tokenistic amounts to the feel of the show as well as the actual scoreboard. 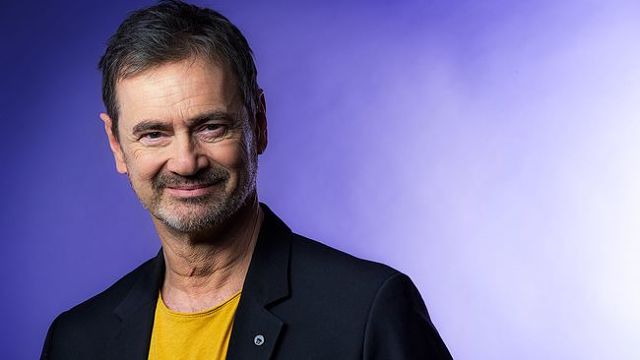 Christer Björkman was one of three jurors in the Junior Eurovision competition this year (Photo: Janne Andersson, SVT)

In Stockholm this May we witnessed Jury voting that was arguably too eclectic. Great television yes, but most of the results felt akin to watching random noise rather than forty considered opinions of experts. Some bizarre voting across the voting sequence is part of Eurovision folklore. Yet the current jury system with only five people and full first-to-last rankings means topsy-turvy results crop up far too often. We already know from previous data that age is not a significant indicator of Eurovision. Therefore I would conclude from the weakened correlation between juries in the same country but different rooms that that our Eurovision jury size of five is too small. This is especially true for the ‘senior’ Contest where in a bigger Grand Final the negative drag effect of one voter putting a song much lower in their personal ranking is much higher.

How Accurate Is Pre-Contest Polling?

Away from just this data, one should also note the disparity between the opinions of the juries that decided the winner and sources online voting in the competition. Alongside proxy data like YouTube views and fan forums, EuroVoix ran an online voting open during the show, where Macedonia took victory and Georgia finished fifteenth. Such disparities should be noted and considered in future voting systems both to engage viewers and to make more representative voting.

One proposal is to also add another mechanism to vote, be that through televoting, app voting, or a separate online award. This is probably worth an article in itself, but Junior Eurovision could do much to keep its most loyal fanbase engaged by having an active measureable way for them to engage with the live show. The second proposal would also use the fact that we are modelling the Kids Jury already like a televote for the result reveal, perhaps their voting system should also be simplified to act more like a televote (perhaps only having each child vote for a top 5 than the entire ranking, for example). This might reward songs like the Macedonian entry that we have previously discussed have divided opinion, a bad thing in the current jury ranking system.