The Country Town Thats #AllAboard For Eurovision Written by Sharleen Wright on May 12, 2018 | 2 Comments

Still stuck at home and missing her Eurovision family, ESC Insight writer Sharleen Wright, goes hunting for where the party is.  It takes her far away from her home city, and west into the mountains to a small country location where the local community embraces the Song Contest in full force.

The end of the train line to the Blue Mountains from Sydney, 2 hours journey time away with a service only once an hour.  Home to one guesthouse where there are no TVs, just a dining room with a piano player for the evenings and a roaring fire to keep warm by as winter and darkness sets in and snow begins to fall outside.  Only two cafes in town, both of which close by 3pm on the weekends. And no pub.

Why would any self-respecting Eurovision fan come to this crazy country town during the most important week of the year? What would possess you to isolate yourself with not only a lack of party places and no TV, but also poor phone and internet reception?

Because this little location — reminiscent of the set of Twin Peaks — is the home of the only public live screening of Eurovision within the state of New South Wales, Australia.

While this country loves the contest so much we fought our way into being an actual contestant, Australia still struggles to give the Eurovision fan community something which we so desperately want. Sydney may have a population of over 5.1 million people, but the city is stuck with Draconian licencing laws preventing late night/early morning activities.  Even in the prime-time re-screening of the Eurovision final on Sunday nights (which is when most Aussies will be watching), Sydney only has one actively advertised event to celebrate the contest in 2018.  If you are an Australian fan seeking any sense of fun and sharing with other like-minded people, you will be best served by throwing a house party. 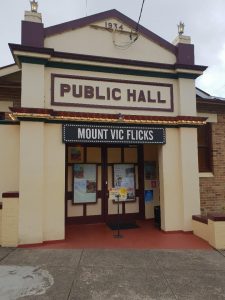 The Stage Is Set

The Mount Vic Flicks is housed in an old country town hall, dating back to the 1930s. Its life as a cinema did not start until the 1980s, but it is Art Deco in style — complete with heavy red curtains, old leather chairs dating back to the original building’s period, and even has an old organ for recitals tucked away to the side. However, the projection and sound is state of the art, and it is the only cinema capable of 3D film in the region.

The candy bar is also a step back in time and a very homely affair: proper brewed cups of tea and coffee in actual crockery, little bags of mixed sweets, freshly baked cakes and the home-made soup. It is a feast for all the senses.  Looking over the full cinema and speaking with people at the tiny box office stall outside, it is clearly a welcoming and appreciative community. It makes one’s heart swell with delight that Mount Vic Flicks is a simple family-affair and obviously run with a love for the tradition of old-style cinema. 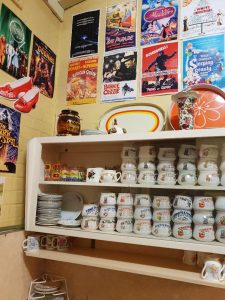 Cinema And Soup – The Perfect Party

Its regular program features the latest arthouse films such as Wes Andersons’ ‘Isle of Dogs’, broadcasts from international theatre and opera, and foreign imports. The cinema also hosts occasional screenings of classics such as The Rocky Horror Picture Show, and it coordinates events such as a upcoming festival of Buster Keaton complete with a live soundtrack.

But for now, all focus is on Eurovision.

Starting at 5am on Sunday morning, Mount Vic Flicks will screen the Eurovision Song Contest live on a big screen to fans from the area and tourists coming specially from Sydney. The screening will be accompanied by a home cooked breakfast where patrons can choose between either beans on sourdough toast or a bowl of banana cinnamon porridge. They will also be met with bottomless cups of tea and coffee — not to mention sparkling wine upon arrival!  The wearing of pyjamas is also encouraged.  Comfort and joy abound, which seems only right for a show regularly considered ‘gay Christmas’.

This event is something that the owners of the cinema have keen to run for some time, Adam and Kirsten being avid Eurovision fans themselves. It initially began as an evening prime-time event starting with Australia’s participation in 2015, but it only met with only slight success. Recognising that most fans would have already known the results by the time of the show as well as the fact the screening ran too late in the night before a work day, Adam and Kirsten decided to take a risk and run with the live broadcast instead. The risk paid off: they went from numbers in the low 20s to more than 80 people last year.

The success continues with the 2018 broadcast already selling out their full capacity of 120 people. 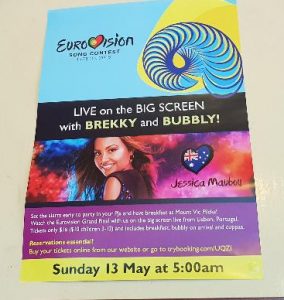 The Show Is Now Sold Out

But the money made from hosting is not going into their pockets personally. Kirsten and Adam wanted to use the screenings not only as a celebration of something they personally enjoyed, but to use it as a positive force as well. ‘We understand the ties Eurovision has with the LGBTQI community,’ Kirsten says.

And so all the money raised from this special event will go to benefit a local LGBTQI organisation named Pink Youth, which was forged from the money raised at last year’s successful live screening. The connections came from a regular cinema patron who presides over the local adult chapter, and funds from the last event went directly into hosting a formal event for young people who identify as being LGBTQI. The new group now runs monthly social meetings and hopes to arrange more activities from the money raised this year.

Our Home, Eurovision, Is Where The Heart Is

And so, for the first time this fortnight whilst everyone else was out on the ground, I have been able to sit down and talk to people face-to-face about our favourites, the contest and its political undertones, Jessica Mauboy’s chances, and how much we love that Eurovision inspires us to travel and discover the world.

Despite its isolation, I feel that if you can’t be in Lisbon, Mount Vic Flicks is the place to be.

I am bowled over by the cinema’s welcoming atmosphere, and the wonderful experience of being in a room full of people (essentially strangers) who are here, just like me, because they love Eurovision. This is exactly where I needed to come to for my maximum Eurovision enjoyment. It will be a very early and chilly morning, but I get to watch it with others that also take delight in the contest. I also know that my small efforts and ticket cost will go to a very good cause. That is heartwarming and absolutely in the Eurovision spirit.

So thank you Mount Victoria for your efforts; #wegotlove indeed.

2 responses to “The Country Town Thats #AllAboard For Eurovision”