It’s scale may be relatively compact, but the aspirations for Eesti Laul are massive. At the very least ERR are keen to send the best of its local music scene to the Eurovision stage. At best, it’s hungry for the second victory. Here John Egan pulls back the curtain as he watches the final rehearsals in Tallinn.

The Press Centre for this year’s Eesti Laul is… intimate. There are few benches of workstations, a press conference corner, and a somewhat larger stand-up space. On one wall is a projection screen of the main feed from Saku Suurhall, though the audio is muted—otherwise the press conferences and stand-ups would be incomprehensible. But the walls between the press room and the arena aren’t especially thick…it is evident when someone’s vocal blows the roof off the arena. And when someone else is badly off-key.

In the press room a mix of English, Estonian and Russian being spoken—reflective of Tallinn’s unique linguistic hybridity. About one third of this year’s finalists are russophones. Around thirty per cent of Estonians have Russian as their first language, so this isn’t surprising. That all of these artists also speak Estonian isn’t either. For many of the younger generations here, language politics aren’t very interesting. All of the acts either speak English very well or are striving to do so. 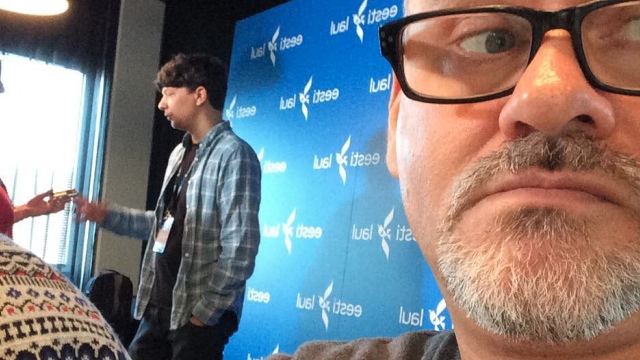 Stig speaks! (We think he’s asking for an iron…)

Eesti Laul ten finalist for this year are mostly in English. There is one song in Estonian and another in Italian. Since this iteration of the Estonian national selection began a decade ago (people around town are wearing stylish kümme gear; ten in Estonian), six songs in English and three Estonian have been sent to the Eurovision. All the Estonian language entries have made the Grand Final, only two in English have done so. There does not seem to be much anguish over language: the focus is on picking a strong entry.

Disinclined to stalk artists, I instead positioned myself adjacent to the stand-up zone. After each brief press conference a queue forms with the mainstream media ahead of the fan media.

The calibre of the questions in English between the fan and mainstream media isn’t appreciatively different. Whilst having some consistency in terms of what one asks each artist makes some sense, hearing all then suffer through the same banal questions (‘What is your favourite Estonian poem?’, “Do you realise you look exactly like?’…) is painful. One regional media outlet insisted on interviewing each act in English…then Estonian…then Russian. But this is all something of a bootcamp for whichever act becomes the Estonian representative for Lisbon. Besides, compared to what this year’s Estonian act will face in the Eurovision bubble, it is a good, relatively tame, run-through. 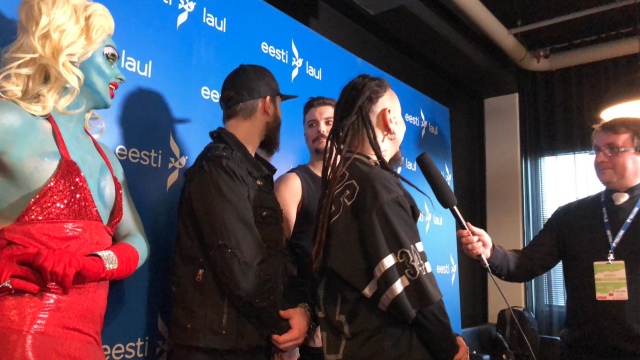 The intense questioning of Evestus

Each of the finalists qualified out of a ten song semi-final. Four from each semi-final qualified based on combined public and jury support; the fifth was chosen through a second televote only round. That means Vajé’s ‘Laura’ and Eliis Pärna & Gerli Padar’s ‘Taevas’ (Sky, or Heaven depending on translation) are already outsiders for victory.

Whilst we have ten entries that each have some pedigree, the wild card in the process is the change of venue. For the semi-finals the performances were pre-recorded and a live broadcast from the ERR studio was built around each clip. How to take what worked in a pre-recorded studio environment and adapt it for an arena with a much larger stage and audience—while making sure the performance works, first and foremost, on the magic box—is not simple. For at least two of the entries, the time constraints of live television will present challenges—though one of them will be performed last.

Saku Suurhall is an excellent venue for a National Final. It’s large enough (around 5,000 seats) to create a positive vibe, the sort that can lift a performance over an intimate TV studio. But it’s also not massive or impersonal.  It is clear which artists have a performance pedigree for this sort of venue (and opportunity). Some seem a bit over-awed managing multiple elements (cameras, stage, audience, actual singing); others seem exceedingly comfortable. Rehearsals are for ironing out any kinks: they do not often offer enough bandwidth for unseasoned performers to leverage the opportunity in front of them.

This year’s Eesti Laul features so many different ways of staging an entry. Very little seems cookie cutter. Almost every staging seems to have been designed to showcase each particular artists very well. Not every national final can boast that.

If the aspirations are to select something great to represent Estonia, there are multiple options on offer: there is only one act that has struggled in rehearsals. However if the aspiration is a possible second Eurovision crown, I see three grand narratives.

In 2008, after multiple years of failed semi-final qualifications, the Estonian public selected from the bottom of the metaphorical barrel for Belgrade.  What followed was a national debate about participating in the Eurovision: from the nadir of ‘Leto Svet’, came a new approach to selecting an entry. This year that approach, Eesti Laul, celebrates its tenth year.  Finishing second to Kreisiraadio in 2008 was a sixteen year old named Iiris Vesik.

Vesik will be on stage tonight, and if ‘Drop that Boogie’ represents Estonia in Lisbon, in symbolic terms it is very appealing.  It is also a great tune.

Evestus’ ‘Welcome to My World’ is over the top—massively so. It took eight minutes for the crew to set it up last night during the first rehearsal. It is so out there—way waaay out there—that it could wrest a surprise victory thanks to a massive televote. Behind the fire and lights is a very catchy chorus. Totally out there. Totally well performed.

From Host To Representative

In 2017 one of the semi-final co-hosts was classically trained singer Elina Nechayeva. The idea of Nechayeva being inspired to enter this year after hosting is seductive…though, in fact, she had already competed in two other ERR music competition shows (‘Eesti otsib superstaari’ and ‘Klassikatähed’):

Whilst this might not be a contemporary song, per sé, it screams “vote for me”.

There’s  a lot more on offer too, including a great Stig Rästa ballad and all sorts of world class contemporary pop music (Frankie Animal, Sibyl Vane, Nika). Any of these would be worthy winners, though the extent to which they might find success on the wider Eurovision stage remains to be seen.

What To Watch Out For

The second half of the draw is where the action is, though there are quality entries throughout. What advice might the juries been given, beyond the usual emphasis on quality? Will there be steers towards what will work at Eurovision? For example, will they know there are no LEDs as part of the stage kit in Lisbon?

There is a lot of hype around Elina and her entry. But ‘Drop that Boogie’ is already on the H&M European store playlist. Evestus needs a massive setup–of the sort that the Eurovision production team in recent years have said “no” to—so victory might be a pyrrhic one.

The edgy videos between the entries are a bit of a future trip: what people will look back on about 2018 in thirty years quizzically (the contents are embargoed). If the named interval guest is true, Eurovision fans will be gobsmacked.

Despite our kindly advice, the format tonight remains the same. The top three entries based on a combined jury and televote score will face off in a televote only superfinal. Were that to be Evestus, Elina and Iiris, the result would be remarkable—and unpredictable.

Regardless, tune in for a great show and an exciting result.