Wren’s Wien: The Day-By-Day Guide To Eurovision Fortnight Written by Alison Wren on May 10, 2015

You don’t need me to tell you that Eurovision is not merely a TV Show and an arena show on each evening. With an expected influx of millions of potential tourist Euros to Austria’s capital city for the Song Contest, Vienna is raising its game to showcase itself as one of Europe’s most fabulous capital cities. In this final edition of Wren’s Wien we get Alison Wren to count down the official guides in a day-by-day format to give you our top tips for where to be and when. Enjoy and we hope to see you there!

Getting All Of The Information

Firstly if you are to pick and choose your ideal plan for each day remember that all the events are not one big co-ordinated jumble. For those looking out for rehearsals and artist information the rehearsal schedule gives you all you need to know, which has a few extra bits and pieces added to it in the official Media Handbook.

The Official Tourist Board is getting very excited about Eurovision this year with a dedicated section of their website and all Eurovision themed events updated in the events calendar as well.

Fan activities are of course dedicated around the Euro Fan Cafe, which has a schedule now online. Information exists as well for Eurovision Village which will be held in Town Hall Square, although we are still waiting for final timings. Finally remember that EuroClub exists too in the Ottakringer Brauerei this year, and like all the above is fan activities is open just for the second week of the Contest this year.

For lots of other general information about the Song Contest, we heavily recommend the excellent guide from ESCKaz with an interactive map of all Eurovision locations, and they’ve already got some videos on the ground to help get your bearings.

What we aim to do here is pick out our highlights of the assembled information overload into daily recommendations of where to go and what to do.

Without a EuroClub or Fan Cafe for the first week, Vienna has decided to be creative for evening festivities with opening up the doors of the Contest to different locations around town. It’s worth popping our heads in to see if the idea works out. These ‘Eurovision Nights‘ kick off at the Café Leopold (Museumsplatz 1,1070 Wien, www.cafe-leopold.at) where we will be entertained by electronic duo ‘Möwe’. How this will translate to the schlager-loving Eurogeeks doing the full two weeks is anybody’s guess, so expect these either to be a massive hit or flop.

They are obviously expecting us to be working this year rather than partying with the lack of major events in the early weeks. The Eurovision Night scheduled here is the Eurovision Jam Night held at the iconic U4 Club (Schönbrunner Straße 222-228, 1120 Wien, www.u-4.at). According to the blurb the ‘Song Contest artists are invited to perform spontaneously with the Eurovision Session Band.’ Again, expect this to be one part brilliant against many parts car crash and completely unmissable.

Perhaps if you are there early take the chance to get a taste of Vienna’s excellent food options? 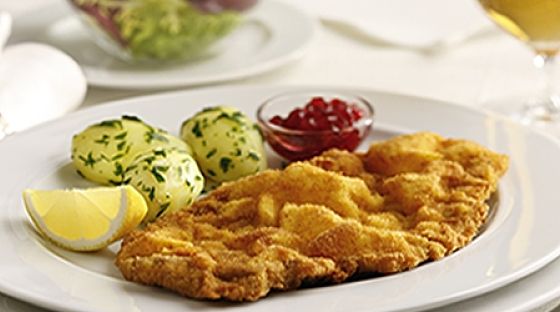 For the second night in a row they are advertising a Eurovision Jam Night, let’s hope some of the acts carry their guitar with them. This time the venue is classy dinnerclub Albertina Passage (Opernring/Operngasse, 1010 Wien, www.albertinapassage.at) where wine and cocktails seem a little more on the expensive side of things.

Maybe today is a good day to take a culture tour across the city instead? Until 10:00 p.m. you can run around The Sound Museum (Innehof, Seilerstätte 30, 1010 Wien, http://www.hausdermusik.at/en/sound-museum/16.htm), where the courtyard gives an amusing look around the Austrian entries from years gone by. Alf Poier awaits…

Originally planned was a night of dressing up in national costume and giggling at the multi-coloured eclecticness from all corners of Europe, but sadly that seems to be taken off the list of activites. Instead the evening might be best spent with a slice of classical Austrian culture. The annual Summer Night Concert at Schönbrunn, will be held on Thursday 14th May. This is the annual open-air (and therefore free) concert of the Vienna Philharmonic, which will be there in the Eurovision Grand Final, but not we think live in the arena.

For a third and surely fabulous time, it’s a Eurovision Jam Night, this one held in Chaya Fuera (Kandlgasse 19-21, 1070 Wien, www.chayafuera.com). If that’s not too exciting maybe it is the day for a tour of the capital city. There is a dedicated two-hour walking tour of Vienna created with vague Eurovision references linking up different parts of the city centre.

We understand if now is the time for an alternative to the sticky and sweet mess of the jams, whatever flavour they create. For a good Friday night out maybe look out at our previous nightlife guide.

The world-famous Life Ball AIDS/HIV charity event will be staged at the City Hall. You can see the red carpet show at Rathausplatz before the main event starts in the City Hall. It has featured in Eurovision before after all.

This is a day with some organised tours ready, in particular it is the day of the Ecstatic Europe tour in the Art History Museum. Focusing on the performances of ‘Euphoria‘ and ‘Insieme‘ I have no idea how this will work but if it works to give me an interest in Art History then it has succeeded.

Now we are into Eurovision week movements and excitement around the capital pick up. Fan Cafe and EuroClub will open their doors today.

For those people non-accredited to the Song Contest yet are one of the many thousands of OGAE members, you can get access to EuroClub. The small number of spare capacity places will be given out at 12 noon each day from Euro Fan Cafe, first come first served and there is we believe no payment needed. Expect a need to get there early.

If you can miss out on the queuing also at 12 noon this day is, Pop meets Opera. Artists will be, wait for it, ‘building bridges’ between musical cultures with music and conversations. It will be broadcast on ORF III, streamed on www.staatsoperlive.com and broadcast in the square in front of the Vienna State Opera house. Cezar has not confirmed attendance.

Later on, starting at 6:00 p.m. all 40 delegations will pose on the red carpet outside City Hall, conveniently re-using the Life Ball red carpet, where they will be received by Vienna’s mayor. The artists then get a fabulous party, and us mere mortals instead have the joys of the Opening Party to the Euro Fan Cafe. OGAE Austria is celebrating 20 years, and has invited Conchita, Niamh Kavanagh, Thomas Forstner, Gary Lux, Stella Jones, Bettina Soriat & Gudrun, and Anita to perform. There will also be a special tribute to the other Austrian winner, Udo Jürgens.

With all this being busy starting, perhaps you need to check out our guide to Vienna transport around now?

The Eurovision Village opens in Radhausplatz hosting an international fashion show ‘Fashion for Europe’ with designers from countries participating in this year’s Eurovision. A cover band will then perform Eurovision songs from the last 60 years (no, it’s not Euroband) with special guests officially described as Austrian Song Contest legends Thomas Forstner (got nil points)and Duo Mess (9th place in Harrogate). 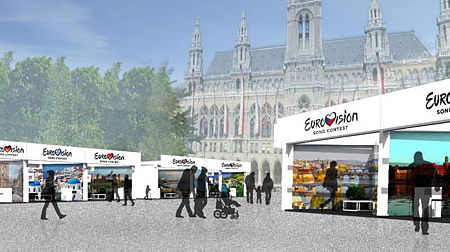 How the Eurovision Village is expected to look this month

In the Euro Fan Cafe you can experience the ‘great voices’ concert with Eurovision Winner 1993 Niamh Kavanagh, Jan Johansen (Sweden 1995), Tony Wegas, and Nadine Beiler. Participants from Moldova and Cyprus have confirmed an appearance, more to be expected.

Euro Club might be the place to be however with the first of the ‘My Number One’ parties featuring rooms themed based on previous Song Contest winners.

If you don’t have tickets to the 1st semifinal, you can watch it on the big screen at Rathausplatz. They are trying an app-based light show to give a feel of how the crowd likes each song, which hopefully won’t go the way of Melodifestivalen this year. In Euro Fan Cafe you can watch the show, and see the following Eurovision winners Anne Marie David and Getty Kaspers (from Teach-In), Jan Johansen (again?), and Lou (Germany 2003).

Before the live final take in some more culture by sitting on 40 custom seats by 40 designers based on 40 countries or pick up one of the official walking tours of the city especially for Eurovision fans which start today. These cost €15. Do make sure to take a break from the Eurovision bubble and see the sights around Austria’s beautiful capital.

The Eurovision village is hosting a tribute to Udo Jürgens, with Andy Rühl who is an Udo tribute act. You can also see performances of the Big 5 entries and elephant-in-the-room Australia live on stage.

Euro Fan Cafe is hosting the annual OGAE International party, with free entrance for OGAE card holders. Get there early, as it is likely to fill up quickly! Traditionally this gets a wide collection of Eurovision artists to come along from this year’s competition (especially Semi Final One qualifiers) but who they can convince is usually a last minute surprise.

Before that though on Wednesday and Friday the City Hall of Vienna is opening its doors for a guided tour. No booking needed and they begin at 6:00 p.m.

Before the second semi-final is broadcast live in Eurovision Village The Makemakes will perform a set which may or may not set things on fire.

You can also watch at the Fan Cafe, with Eurovision Song Contest 1960 winner Jacqueline Boyer, Lou (Germany 2003) and from Slovenia Darja Svajger (1995 and 1999) performing as well.

Maybe with a quiet day in store it’s a good opportunity to take a day break from the capital?

Eurovision Village is celebrating a themed day all around Conchita, labelled the Queen of Austria, with a Conchita look-a-like contest on the programme. You need to be at least this level to think yourself worthy.

If being all swatted up on the Eurovision politics with a tiny tiny p gets you buzzed and are an OGAE member, this afternoon holds the annual President’s meeting for OGAE International and the vote for a new President in the Fan Cafe. Only one vote exists for each country, but expect to stumble across some campaigning while you are around the fan bubble.

Numerous places are showing the Grand Final live, but it looks like the best bet is going to be in the main square of Eurovision Village. They are expecting 10,000 people to be in attendance there with the live reading out of the Austrian points, and I certainly thought it was a brilliant experience last year in Copenhagen. If you are not in the arena you must be there.