In our fourth article, we take a look at the more cultural side of Vienna. If you have somehow run out of Eurovision-based activities, there is plenty to see and do in one of Europe’s foremost tourist cities. As the former centre of a major empire, Vienna has more than its fair share of opulent palaces, gardens, and famous pieces of art. Alison Wren gives you a run down of what to do with your free time.

If you are planning to get some serious sightseeing done, you might want to invest in a tourist card. The Vienna Card gets you free public transport and discounts on over 200 museums, sights and cultural centres. It costs €18.90/€21.90 for 48/72 hours, and you can pick one up at the tourist information centre at the airport, train station or Albertinaplatz.

All accredited journalists will receive the Vienna card’s big brother, the Vienna Pass. This also gets you free entry to all the major attractions including the zoo and royal palaces. You can also choose to get free public transport included. Starting at €69.00 for 2 days, and costing up to €132.00 for 6 days plus travel, this is not a cheap option.  However, you could make your money back if you are planning to visit all the major attractions, as they are all quite pricey.

The Seats Of Royal Glamour

The Schönbrunn Palace was the summer house of the Austrian emperors. A giant baroque building with vast gardens, this UNESCO World Heritage Site is well-worth a visit. You could spend the whole day exploring the palace and grounds.  It is located south west of Westbahnhof, half an hour’s walk from the Stadthalle.

The Imperial Palace (Hofburg) was inhabited by the imperial family until the end of the empire in 1918.  Today the Imperial Palace houses the office of the President of Austria. It was originally a castle built in the thirteenth century that  expanded to an opulent palace as the Austro-Hungarian Empire grew. You get three museums in one: Imperial Apartments, the Silver Collection, and the Sisi Collection, which provides an insight into the life of the famous Empress Elizabeth.

The Belvedere Palace and Museum houses an art gallery with a range of paintings from Mediaeval times to the present. Their most famous painting is ‘The Kiss’ by Klimt. Alongside the art, there are three palaces to explore. The palace buildings will cost you €30 a ticket, but entry to the gardens is free.

Kunsthistorisches Museum near Eurovision Village explores art from Ancient Egypt to the Renaissance. Famous works include Raphael’s ‘Madonna in the Meadow,’ Vermeer’s ‘The Allegory of Painting,’ and the Infanta paintings by Velazquez.  Alongside these are masterworks by Rubens, Rembrandt, Titian and Tintoretto. On the 14 May, 16 May, 17 May and 22 May 2015 (at 4.30 pm) they are offering special Eurovision themed tours. Called ‘Through The Museum With Music,’ these tours use past Song Contest winners to provide a theme along the way. This lets visitors experience the museum’s collections from an unusual perspective. This might be worth a visit if only to see how they combine ancient art and Eurovision songs. I wonder if their Eurovision knowledge extends to the Caravaggio’s they have as well?

The Museum Quarter, a mix of modern buildings and the former Imperial Stables, hosts a number of 20th and 21st Century art galleries, such as the Museum of Modern Art and the Leopold Museum. A wide range of restaurants, cafes and shops make this the ideal place to soak up some culture.

If you are more interested in science, the Natural History Museum is well worth a visit with its diverse animal and ethnography collection, as well as a planetarium.

For a bit of alternative culture, the Third Man Museum offers an insight into the eponymous film, the life of star Orson Welles and post-war Viennese life. As this is a private museum, entrance times are limited – see the website for more information.

At The Centre Of Classical Music

Vienna is considered the home of classical music, with Beethoven, Mozart, Hayden, Schubert, Brahms, Strauss Sr. and Jr. all previous residents in the city. If you want to visit memorials to these musicians, the tourist board has compiled a handy list and a self-guided walk.

If you are looking for some high culture, the State Opera House sells great-value standing tickets from only 2 euros. Tickets are sold 80 minutes before the show starts from the western side of the Opera House.

We will get a taste of the Vienna Philharmonic Orchestra in video format to open the Eurovision final, but if you are in Vienna early and want to see them in person, the summer night concert at Schönbrunn Palace on the 14th is free to attend. Around 100,000 people are expected to attend the outdoor concert, which will also be televised.

The Musikverein hosts the EBU’s other big annual concert – the Vienna New Year’s Day Concert. The golden hall has excellent acoustics in a beautiful setting. You can get tickets for classical music concerts throughout the Eurovision period here.

From one iconic EBU event to another, Vienna is the home of the annual New Year Concert

The town hall, the Rathaus will host the glittering Eurovision opening party on the 17th May. You can watch the red-carpet entrances from 6pm. Town Hall Square is home to the Eurovision Village, hosting a week of Eurovision activities.

The Zoo at Schönbrunn Palace, opened in 1752, is the oldest in the world. The highlight of the zoo is likely to be the giant pandas.

The Wurselprater amusement park, originally opened by Emperor Joseph II in 1766, also has a long history. The most famous attraction is the iconic Wiener Riesenrad. Constructed in 1897, it was famously used in the Orson Welles film ‘The Third Man‘ (and less famously in the James Bond film, ‘The Living Daylights‘ with Roger Dalton). Entrance to the park is free and rides cost between €1,50 and €5,00. 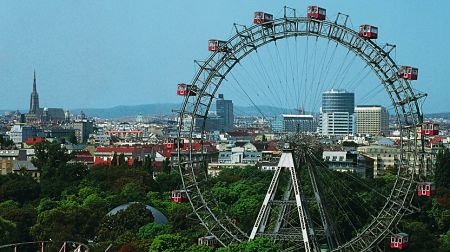 Rising about 200 feet above the ground, this huge Ferris Wheel has been one of Vienna’s most well-known features since the end of the 19th century.

If trams are your idea of fun (don’t laugh – this would be my dad’s highlight of the trip!) a dedicated tourist tram runs around the historic Ringstrasse, past the Vienna State Opera, Imperial Palace, Parliament, and City Hall. Information about the buildings is given via screens and headphones. You will need to buy dedicated tickets for €8 each. If you have a travel card and want to save money, trams 1 and 2 run along most of the route.  You can hop on and off, rather than being stuck on a tram all the way around!

The Vienna Tourist Board is putting on special city walks and guided tours for Eurovision fans between May 19th-23rd. Due to a lack of Eurovision heritage in the city, they are more focused on Viennese culture, and you can sign up here.

This has been Edition Four of Wren’s Wien, with our previous installments being featured on Transport, Food and Nightlife.  Next week’s release will be all about possible day trips outside of the city limits.