Wren’s Wien: Burst Out Of Vienna’s EuroBubble Written by Alison Wren on May 3, 2015

If you need a break from city life, there is a good choice of daytrips out of Vienna. Vienna itself may be a hub of activity and the centre of important meetings throughout modern history, but that culture has influenced the surrounding areas and cities as well.

There are unique cultural delights that are easily in reach with a day trip, and travel guru Alison Wren is on hand to recommend the best of them to you now.

Swapping one city for another

Vienna and Bratislava are two of the closest capital cities in the World at just 40 miles apart (beaten by Rome/Vatican City and Brazzaville/Kinshasha), making the capital of Slovakia an ideal daytrip. Even the idea of simply popping over for Eurovision wasn’t enough sadly though to convince Slovakian broadcasters from taking part sadly this year. A direct train takes you from Vienna to Bratislava in just over an hour.

If you like the idea of medieval streets juxtaposed against brutalist architecture Bratislava is the place to visit. The well-preserved old town is a pedestrian area with winding roads and beautiful buildings which will charm you silly and encourage you to spend your euros. There are plenty of places to grab a meal, and you can expect food to cost around 40% less than in Vienna for those wanting to splurge on a budget. Crossing the river Danube via the UFO bridge (with observation deck and panoramic restaurant) you will find a monolithic Soviet era housing development. 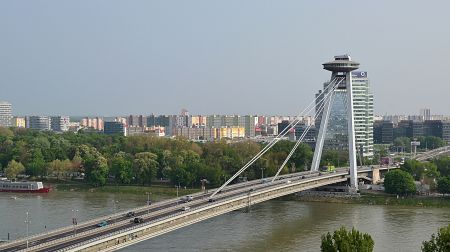 Beyond the UFO Tower is a land of concrete monstrosity

Other major cities just about within daytrip distance by train are Budapest (as the bookies reckon we aren’t going to Hungary next year) and 2nd placed host city candidate Salzberg. Budapest will take nearly three hours by train however, so it would be an early start for a day trip. Salzberg is a little shorter at 2 hrs 20 mins.

On the Beautiful Blue Danube

The river Danube, although now a more brown shade than the lapping blues from Strauss’ era, runs through the centre of Vienna and there are many boat trips available. You could use the Danube itself to visit the other capital cities mentioned above, slower but arguably more majestic. Budapest would take 5 ½ hours for a one way trip but more reasonable could be the 75 minute trip to Bratislava. Alternatively, you can pitch up and hire little rowing boats yourself to explore more of Vienna.

River cruise highlights include the Wachau Valley Tour, a day-cruise through the UNESCO registered World Heritage Landscape. Alternatively you can choose a classic Vienna cruise, or one with traditional Viennese folk music. There is no news as of yet if they will be switching music themes to Eurovision for the arrival of fans this month. Prices start from around 20 euros, with some options including sit down lunches or the traditionally cheerful schnitzel followed by strudel. 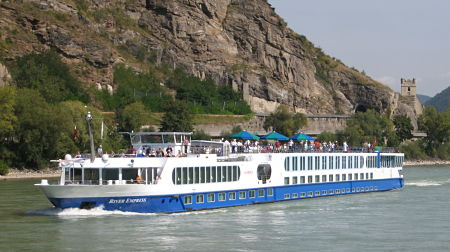 If you prefer your boat tours a little more claustrophobic, boat trips on the largest underground lake in Europe are available. Seegrotte is an accidentally flooded former mine, just to the South of the city boundaries. Seeing an opportunity to make some money out of the mistake, the mine has been open to the public since the 1930s, with the exception of the Second World War when it was used to secretly manufacture the first jetflighter aeroplanes.

If castles are your thing, the Burg Liechtenstein is the family castle of the country of Liechtenstein. You will find it not in Liechtenstein but near to Seegrotte on the Southern fringes of Vienna. You can take a bus from the city centre, and a tour of the castle costs 9 Euros.

The spa town of Baden bei Wien offers large sulphuric thermal baths, as well as a modern twist on a Roman bath-house. If you can get over the smell of rotten eggs everywhere you turn, it looks like a nice place to spend a sunny day! It’s just 20 minutes by train from Vienna Meidling train station, or you can take a tram all the way from the Opera house in central Vienna, taking an hour. 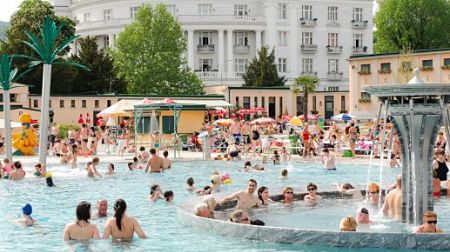 If you need to escape the big city for a touch of nature, the Donau-Auen National Park is a wetland paradise just outside Vienna. Your journey should start at the Wien-lobAU National Park house , at the eastern edge of the city. There are well-marked walking and cycling routes from there into the park. If that all sounds like too much physical activity, you can also book a boat trip to see the national park without having to walk.

Around 40 miles to the South-East of Vienna you will find Lake Neusiedl, yet another UNESCO World Heritage area (is there any part of this country which is not UNESCO registered?). This is a popular Austrian holiday destination with beaches, sailing, cycling, golfing and most importantly it’s a wine-producing region! There’s a train at half past every hour leaving the central train station in Vienna, taking just 45 minutes.

This concludes our fifth edition of Wren’s Wien all about the things to do in Vienna. Our final edition next Sunday will give you our daily top tips to what the highlights are in the Eurovision bubble and beyond during the two weeks of the Song Contest. At the time of writing the long range weather forecast is mightily exciting!