Let’s Go Azerbaijan: The must-see sights of Baku and beyond Written by Sharleen Wright on May 2, 2012 | 1 Comment

In the history of Eurovision, never have we travelled so far East to visit the Contest.   That is of course, if you are flying in from Europe.  In the many years and times I have travelled between Australia and Europe, I have passed over this country by plane, looking down and wondering what life was like below in this little spoken of region.  From my brief visit to the “East of the East” late last year, I can now speak with some experience.

Despite its somewhat secluded location, a checkered past, and its utterly foreign landscape to the rest of Europe, the region and its peoples are extremely welcoming to all.  For many, this will be the first and only time travelling to the region; and as a personal second-time visitor to the Caucus region, I recommend taking advantage of this rare opportunity to see as much as possible and soak in the atmosphere and culture of this rich nation and its history.

For those unfamiliar geographically (and without Eurovision I’d say that would be  most of us), Azerbaijan is situated in the Caucuses region, comprising also of Georgia and Armenia.  It was previously part of the USSR, and the country is located between Russia, Turkey, Iran, overlooking the Caspian Sea.

Azerbaijans’ capital city of Baku dates back to the 1st century AD, and is the largest city in the Caucuses, with a population of over two million people. At Baku’s core remains the old city (known as ‘Icheri Sheher’) which is surrounded by an ancient wall.  This heart of the city, and the most interesting for tourists was awarded a UNESCO World Heritage listing in December 2000, containing the famous Maiden Tower and the Palace of the Shurvanshahs.

Situated in the south western corner of the Walled City, the Maiden Tower (known locally as Giz Galasi) represents 12th Century architecture of Baku.  The tower legend is of a maiden (said to be the daughter of the Khan of Baku) who threw herself off its top to her death in the waves below. A more natural explanation for the name is the fact that the tower has never been taken by force (hence a metaphorical reference to ‘virginity’) and the fact that some believe that it was once a Watch Tower .

The Maiden Tower stands at a total height of 29.7 meters, with a diameter of 16.5 meters.  Climbing to the top affords a wonderful view over both the city and the sea. 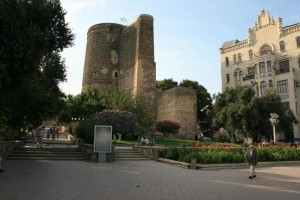 The Maiden Tower in Baku

The Palace of the Shirvanshahs

The Palace of Shirvanshahsis considered by locals as one of the pearls of Azerbaijani architecture, built in the beginning of the 15th century. The historical complex contains a palace, a mosque with minarets, a bath house, and many intricate and beautiful small stone complexes, known as divankhanas.

The complex construction began in 1441, was completed in 1558 during the Shirvanshah dynasty. Under Ibrahim I of Shirvan, the countrys capital was transferred from Shemakha to Baku following a devastating earthquake. The building is believed to be a memorial complex built around the sacred place of worship and a tomb of Seyyid Yahya Bakuvi who was a Helwati Sufi saint.

Whilst Baku is full of museums, ranging from ancient manuscripts to detailing the occupation and independence of the nation, one of the most unique opportunities to understand the countrys history and culture is a visit to the Carpet Museum.  Formerly a Lenin Museum, this neoclassical building now houses an interesting collection with thousands of examples of their best artistry, and charts the history of the Azeri carpet market.  There are examples of rare and beautiful rugs from Azerbaijan, as well as Iran and Dagestan.

A sample of carpet is perhaps the best souvenir to take away from Azerbaijan, and knowing that permission has been gained by the producers to utilise our favourite TV show’s logo, don’t be surprised if a little Eurovision rug finds itself on the must purchase list during your visit.

Outside of Baku City

On the the outskirts of the city, lies one of the most important areas forAzerbaijan, not just tourism-wise but economically… the Absheron Peninsula.  It is famous for oil oozing out of the ground naturally, as well as for natural oil fires.  Thanks to this marvelous natural phenomenon, the lands have long been held sacred.  The area is a central point for many temples to celebrate this ‘Land of Fire’, and is a key point of rituals for the ancient religion of Zoroastrianism.

Remember the special handover presentation back in January, the one that looked like some ancient Roman sun temple?  Well it exists.  The Ateshgah temple (‘Fire Temple’) is situated south-west of Baku, thirty kilometres away in the Surakhani settlement on the Absheron Peninsula. This fire temple was built in the 17th-18th centuries and is located on a natural gas pocket.

The complex was turned into a museum in 1975 and now receives 15,000 visitors a year. It was nominated for World Heritage Site status in 1998 and was declared a state historical-architectural reserve.

Yanar Dag translated as “Fire Mountain”, is an ancient and visually stunning fire which blazes continuously on a hillside on the Absheron Peninsula on the Caspian Sea.  Here, flames shoot into the air 10 feet along a 30 foot wide ridge on a limestone hillside. Only a handful of fire mountains exist today in the world and most are located in Azerbaijan.

The naturally occurring fire burns most impressively at dusk, when both tourists and locals sit at a nearby teashop deriving inspiration from the spectacular sight. 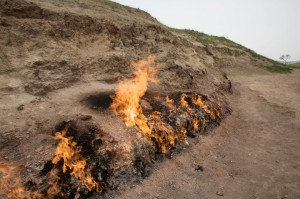 In 2007 the area of Gobustan was declared a UNESCO World Heritage Site of Universal Value.  The region boasts many monuments dating back to 10,000 BC, and indicates that the region once had a thriving culture.  It features the remains of inhabited caves, settlements and burials, all reflecting an intensive human use by the inhabitants of the area during the wet period that followed the last Ice Age.

The greatest sight for most tourist however are the thousands of rock engravings; they depict primitive men, animals, battle-pieces, ritual dances, bullfights, boats with armed oarsmen, warriors with lances in their hands, camel caravans, pictures of sun and stars.  Once again, like Absheron peninsula, it is based on a geologically active area, with the landscape dotted with mud volcanoes and fissures.

If you missed Next week, ESC Insight brings you the last part of our “Lets Go Azerbaijan” Series – and if you missed part one, catch up on Visas, Hotels, and Money here. In the third feature, Sharleen will examine the cultural aspects of Baku, this time featuring a hit-list Bakus’ hottest sounds (nightclubs) and tastes (restaurants).  Don’t forget to read it before setting off for your Eurovision trip to the city caught between East and West.

One response to “Let’s Go Azerbaijan: The must-see sights of Baku and beyond”