In just over a month many people will start heading to Baku.  It’s natural to have some nerves over travelling – not just amongst the delegations, but for this year especially for fans.

To settle those worries, over the next three weeks ESC Insight plan to bring you a series of article covering many of the necessities to plan and make the most of your time in Azerbaijan.

This week, our resident travel guru Sharleen Wright guide you through the must-know information and the best way to travel to and in Azerbaijan – covering visas to currency, hotels and transport.

Unlike what has been previously published, the visa process to enter Azerbaijan is not as clear cut as just getting a visa on arrival. The process differs for those who hold passports in one of the European nations participating in the contest, those who are from a CIS country and Turkey, and those who hail from further abroad, e.g. United States, South Africa, Australia.

Countries that do not require visas

Holders of ordinary passports issued by the following countries have the right to access Azerbaijan without a visa: nationals of Belarus, Georgia, Kazakhstan, Kyrgyzstan, Russian Federation, Tajikistan, Turkey, Turkmenistan, Ukraine, Uzbekistan and Moldova.

As from Thursday 10 May, holders of a passport from any of the 42 participating countries can obtain their entry visa upon arrival at Baku International Airport. You will receive single-entry visa for your stay, valid until 1 June.

In order to secure your Azeri tourist visa you need to bring:

For anyone falling under this heading (e.g. Armenia, Poland, Czech Republic, Australia, New Zealand, African, American and Asian territories), it is necessary to apply in advance of travel. You are currently not covered by the  special visa conditions in place for the Eurovision Song Contest. Do not proceed to travel to Azerbaijan without prior visa arrangement as you will risk being turned back at the border. 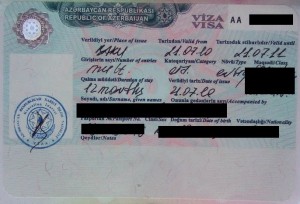 The process in securing the visas prior to arrival is still unclear. From our own experience, we have been told by one agency it is necessary to follow the normal visa application procedures;  in another, just proof of ticket purchase and an application with fee was necessary. This was not affected by nationality (in this case Australia and United States nationals) but the individual rules and procedures in place at each Embassy to deal with Eurovision attendees.

The best advice we can give is to prepare to follow the normal visa issuing procedure and be prepared to supply the following:

One Azeri-based travel agency we have located is prepared to provide invitation letters and vouchers to support a visa application at an additional cost. Having one prepared for a potential visa application should make the process smoother for those still in the situation of trying to secure accommodation in the host country.

Please note this is only our advice based on our understanding!

Ultimately it is your responsibility to ensure you contact your local embassy as early as possible and ensure you follow whatever process they advise. Do not leave getting a visa to the last moment as many Azeri consulates work on reduced hours and days, and there are a number of Azerbaijani national holidays falling between now and the contest that may also affect the time for processing.

For a list of all Azeri consulates worldwide, click here.  The closest visa issuing agency for Australia & New Zealand nationals is Malaysia; for South Africa it is in Egypt; American Eurovision fans have an Embassy in Washington DC, a Permanent Mission at the UN in New York, and a Consulate-General in Los Angeles.

Azerbaijan has its own form of currency, known as the Manat, and there are one hundred Qapik to one Manat. Naturally the exchange rate will vary, but as of time of writing, a rough rule of thumb is:

Outside of the region, Manat is unable to ordered prior to travel. For this reason, we would recommend carrying either some cash in US Dollars or Euro (in that order) for exchange locally. If you have to bring UK Sterling, make sure it’s Bank of England £20 notes and nothing else.

Exchange Houses are plentiful around the city, usually situated close to shops and some are even open 24 hours. US dollars are accepted in some hotels and larger stores and restaurants.

And contrary to popular belief, there are thousands of ATMs in Azerbaijan, and most are part of the Visa and Mastercard network, so you are able to access any funds you have in bank accounts from home at any time. A word of warning though, do not rely upon credit alone. In the Caucus region, and particularly Azerbaijan, credit cards are rarely accepted outside of hotels. This is one country where cash is king.

So, what will your Manat get you? Well, if you were to take a trip to the McDonalds in Baku (not that you would – but it’s a good scale to measure by), 80 qapik would get you a cheeseburger or a small coke. A decent coffee in a restaurant would cost you an average of 4 Manat, whilst a Azeri sit-down meal may set you back about 20 Manat. You can pick up some of the local beer for roughly 2 Manat. A trip on the local metro costs a mere 20 qapik.

The big tip, as any smart traveller knows, is to not rely on one form of currency when you travel – make sure to take a mix of cash, card and if you can get one, a travel money card that you can top up but is not linked to your bank account in case something unfortunate occurs.

For those concerned about accessing cash upon arrival into Baku for your visa and other pressing costs such as hotel deposits and taxis, prior to reaching the area for visa application there is both an ATM and an exchange desk at the Heydar Aliyev International Airport.

Azerbaijan - where cash is king

One of the aspects that concerns fans for every Eurovision, is that of transport – from getting from the airport to their hotel,  then from the hotel, around the city, and this year to the Crystal Hall.

Baku has a cheap and efficient system of metro and buses that operate around the city, similar to that of Moscow. However none of the current services travel within 2 kilometres of the newly built Crystal Hall. Likewise, there is also a local service operating to and from the airport to the centre of town, however it operates limited hours which do not meet many of the international flights arriving either late at night or early in the morning for fans.

Currently, one taxi company services the airport and is known to charge exorbitant costs for transport to hotels as it monopolises the route. For that reason, it is best to contact your hotel directly prior to arrival to organise pre-paid and cost-negotiated transfers that will meet you at the gate.

There is however some light at the end of the tunnel. Two days ago it was announced by the Azeri Minister of Transport that a special service will be in place to transport attending fans, press and delegations between the airport, city, hotels and the arena. The Azadlig Square in Baku will be the centre of these special buses during Eurovision and will facilitate the process of transporting of a great number of people between the main locations involved in the event.

In addition, some 22 taxi stops will be established in the central and main areas of the capital, served by some 220 specially trained drivers in London taxi cabs. 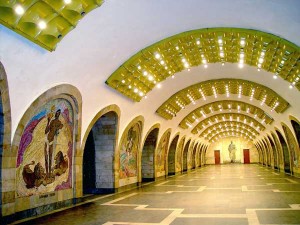 Experience the art of the Baku Metro

Securing accommodation in Baku seems to be the most serious challenge for Eurovision fans. Whilst the arena should hold about 18,000 people for the shows, the capacity of Baku hotels is around 13,000 beds. Ordinarily for Eurovision, early bookings are highly recommended. The experience however has been that many who did book early have since had their bookings cancelled due to the Government controlling the sales and banning hotels from taking such bookings. Now with just 6 weeks left, bookings for most people in the public are still not possible due to a block on Baku hotel rooms not being lifted, except for those allocated to people who are accredited through the EBU system (members of the press, the handful of accredited fans by each delegation, and the delegations themselves).

If you are one of the lucky accredited few, you should have access to a special website through eurovision.tv that allows reservations for the two week period that the rehearsals and Eurovision actually run. On the site there is a range of 2-5 star hotels, selling from 80-400 Euro a night. This booking system closes on 10th April.

It is expected that any hotels that have not been booked following the accreditation site closing will go on sale to the public after 25th April. Reports are that whilst the ticket sales are down, most hotels are reporting to be full thanks to the coordinated accreditation sale, delegations, and forward sales from Russian travel agencies. We recommend keeping an eye out on websites such as Expedia and Booking.com for any last minute availability, or contact local Azeri tourism companies such as Azerbaijan24.com to see if they can source private rentals or small hotels that should soon have their block booking ban lifted.

In conjunction with this possibility, Sietse Bakker from the European Broadcasting Union recently announced online that 200 apartments in Baku, which can accommodate approximately 1,000 Eurovision fans will soon be available at very reasonable prices. This sale will be open to all attendees, and shall be co-ordinated by the OGAE Azerbaijan fanclub. It is expected that the apartments will all be centrally located, and beds shall be available starting at a cost of 40 Manat per night.

Stay tuned over the next month for our further 2 parts of “Lets Go Azerbaijan”, covering off the must-sees of Baku and beyond, as well as the sounds (nightclubs) and tastes (restaurants) of a city caught between East and West.