The special relationship: Australia and its love of Eurovision Written by Sharleen Wright on January 26, 2011 | 14 Comments

As you sit down to watch the Eurovision Song Contest every year, do you ever wonder why the hosts, despite the tens of countries and the millions tuning in across Europe, always give a special hello to Australia?  Why is there is always at least one crazy fan in the audience brandishing an inflatable kangaroo or an Australian flag? Let’s find out.

The link between Australia and Eurovision goes a very long way back (the history is longer than most of the current entrants to the contest).  A number of Australian linked participants have represented other countries since the 1970s.  British-born, but Australian resident, Olivia Newton-John was the first, performing ‘Long Live Love’ for the United Kingdom.  Mr Eurovision himself Johnny Logan may be Irish, but he grew up just south of Melbourne in the city of Frankston where much of his family still resides. The UK entrant for 1996, Gina G, was more than “Just a Little Bit” Australian having hailed from Brisbane, and Jane Comerford from Texas Lightning, the 2006 entrant for Germany, was born and educated in Newcastle, two-hours north of Sydney. 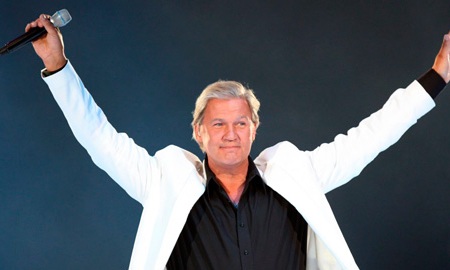 Additionally, Australia is an associate member of the Eurovision Broadcasting Union, allowing broadcast of many popular Europe-based shows.  Utilizing this membership, over the past 25 years Australian television station SBS has also broadcasted Europe’s biggest song contest.  SBS is a free-to-air station specializing in multicultural programming, including ethnic news, films and sport, as well as quality English-speaking entertainment sourced from renowned international channels HBO and BBC. Eurovision fits into their remit perfectly.

The Song Contests’ popularity initially was credited to Australia’s large European immigrant population; Eurovision providing a moment where the large communities of Greeks, Italians, Turkish, Serbian, Maltese, Irish, etc. could share wonderful moment of nostalgia and national identity.  However, by the mid 1990s, the attraction grew into much more – fuelled by second-generation Australians and a younger audience tuning in to listen to the ‘hilarious’ BBC commentary of the infamous Terry Wogan.  Due to the high popularity of Wogan over this period, for most Australian viewers the affinity with the British coverage still exists and the views held and discussed in the commentary have created a lasting legacy.

The popularity of Eurovision in Australia became most evident during the 2000s, once the broadcaster sought to capitalize on its cult status by ‘localising’ the song contest.  In 2001, SBS attempted its first Australian studio broadcast of Eurovision hosted by Effie – a popular comedic Greek-Australian character of the 1990s played by Mary Coustas.  The program that went to air heavily edited the song contest, removing the local hosts, postcards and much of the voting; replacing them with local introductions from renowned television personalities in Australia and utilizing a chat format discussing the worth of the songs performed.  To say it was an unpopular move would be an understatement, causing a meltdown of the switchboard due to the level of complaints.  Bowing to fan pressure, the broadcaster was then forced to re-screen the contest in its entirety featuring the BBC commentary one week later.

Going back for a second bite, SBS appointed writer and Australian Eurovision fanatic Des Mangan to commentate the 2004 Eurovision Song Contest.  Mangan had previously featured on programs as an established Eurovision ‘know-it-all’, published a book on the subject prior to this “This is Sweden Calling”, and appeared more than capable of being a good mix of both knowledgeable and entertaining on the subject.  Nevertheless, when it came to the broadcast, fans received his local commentary as a ‘poor mans’ Wogan’.  The result was once again a record number of complaints and the need to re-screen the event with the UK commentary to appease the viewing public. 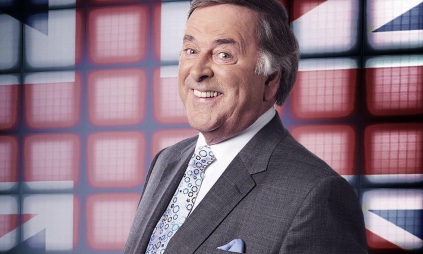 SBS returned to its regular method in 2005 to 2008 re-broadcasting the BBC coverage, and it was only upon Terry Wogan leaving the BBC, that broadcaster SBS feel comfortable again to employ its own local commentary team.  In 2009, they appointed Sam Pang, local Melbourne radio host; and Julia Zemiro, best known locally as host of the music show Rockwiz, but also self-professed Eurovision fan and member of the original cast of ‘EuroBeat – Almost Eurovision’ to commentate in Moscow.

(‘EuroBeat’ was created and first performed in Australia, featuring as part of the line-up of the Melbourne International Comedy Festival in 2004).

The 2009 SBS coverage followed the European model of commentary between songs and video snippets of interviews conducted by the local commentators at the actual event.  Whilst occasionally educational and sometimes witty, it didn’t border into the offensive nor did it toe the line of stereotypes which Wogan professed in his latter years of hosting.  Despite calls from some (mainly those not in the know about the BBC changes) to re-screen the broadcast with the UK commentary to give Eurovision ‘more authenticity’, it was a case of 3rd time lucky with the hosts and the change in coverage generally well received.  As a result, the same team returned in 2010 to cover the events in Oslo, and will again feature at the 2011 event.

In addition for 2010, SBS upped the ante in its coverage with a more extensive website, dedicated radio station and featured additional Eurovision-related programming in the month prior. The SBS website allowed Australian fans to vote for their favourite song; of which Turkey was the winner; and also chat to other fans in real time via their forum.  For the first time, SBS broadcast a 24 hour digital radio channel playing non-stop Eurovision hits and a number of special shows recorded by our very own Scottish podcaster, Ewan Spence. These shows covered fan reviews of songs, news directly from the rehearsals and press room and a roundup of semi and final results that featured a number of artists, OGAE UK members and Eurovision journalists. 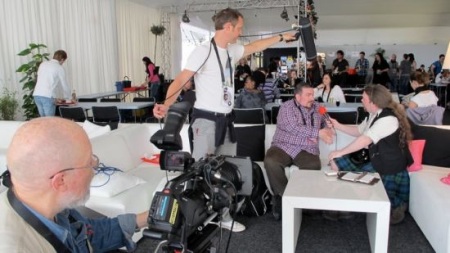 Ewan hard at work, along with the Australian film crew from "Secret History..."

On TV, SBS showed both semi finals and the final on a delayed broadcast – Friday, Saturday and Sunday of Eurovision week. There were screenings of ‘Countdown: Eurovision 2010′ on the week before, Junior Eurovision 2009 and its own special ‘The A to Z of Eurovision’. This special was a 90-minute exploration of the history of Eurovision complete with clips of the greatest songs, the kitschiest costumes, interviews with some of ‘Australia’s’ Eurovision stars.  In total, a whopping fourteen hours of TV coverage was broadcast over the fortnight – six more than the BBC and most other competing countries, thanks to the growing interest in the show locally.

Fuelled by this increasing coverage, it could now be said that Eurovision enjoys a cult status amongst the Australian population.  Whilst it is in no way the most-watched show over the May period, it supplies SBS with its second most watched regular program in its yearly schedule (the first being the screening of the English FA Cup Final, or every 4 years, the World Cup).  Asking most Australians about Eurovision you are likely to get one of two responses: from the over 30s the acknowledgement of ABBA winning in 1974, and for the under 30s, the existence of “that heavy metal band that won from Scandinavia”.  Thanks to increasing news coverage, and other broadcasters slipping mentions of the E word into their shows (mainly in order for amusement), more and more people in Australia know exactly what Eurovision is.

Increasingly Eurovision is celebrated as an event amongst friends – hosting Eurovision dinners, and screenings in various clubs across the capital cities.  In the capital city of Canberra, European consulates get together to host a dinner party and screening;  Sydney uses Eurovision as an opportunity to fundraise by hosting nights in gay clubs along its Oxford Street strip; and in Melbourne an annual gathering is held at the Trades Hall for fans to enjoy the spectacle and the music.  Beyond those examples, many of the multicultural clubs across Australia host big-screen viewings, and can be always relied upon for a venue in which to enjoy the event.

Last year’s host city of of Olso also saw the first ever Australian fan meet. A Facebook group called ‘Aus-lo’ was created in early 2010 to organise a fan gathering during the event in Oslo.  In comparison to the small attendance of individual Australians to the event in previous years, the 2010 meet located a substantial number Australian fans in town to specifically attend Eurovision.  The meet was held prior to the second semi final within the Eurocafe for twenty attending fans, with a further fifteen Australians catching up at the venue before the second semi final.  The meet was widely acknowledged by local media, OGAE and featured as a headline on the official Eurovision.tv website. 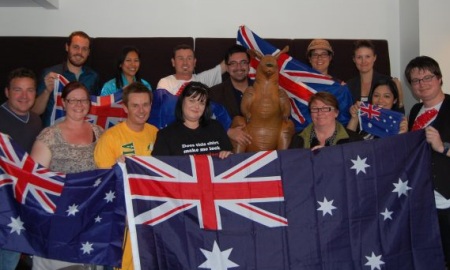 Eurovision permeates through a lot of Australian cultural outlets and events. Sydney Gay and Lesbian Mardi Gras have previously featured Eurovision dedicated floats, and a battle of the bands style competition was held to find a fictitious Australian Eurovision entry both in Melbourne and Sydney during 2010, Over the past decade, local cultural clubs have toured various entries over the years including Verka Serduchka, Anna Vissi, Elena Ristevska and Dima Bilan. Certainly, if you look hard enough as an Australian fan, there’s enough to keep the spirit alive throughout the year.

To conclude, it is increasingly hard in Australia to ignore Eurovision through its increased coverage, nor deny the relationship many have with the Song Contest.   Without having the ability to participate or host (although rumours have circulated that there were serious negotiations to attempt this in the past) Australian fans have and will continue to attempt to feel just as much a part of the Eurovision phenomenon through major efforts. By creating their own events, traveling half way across the world to the event, writing blogs, and demanding more and more of the broadcaster to cover every facet of the contest, Australia has shown its undeniable love for Eurovision

14 responses to “The special relationship: Australia and its love of Eurovision”