Inside The Rotterdam Ahoy, Eurovision’s Bubble Of Freedom Written by Ben Robertson on May 19, 2021 | 4 Comments

Tuesday night saw the first semi final of the Eurovision Song Contest 2021. The Rotterdam Ahoy had space for 3,500 attendees, and ESC Insight’s Ben Robertson wondered how the experience would be different this year compared to Contests of a previous era.

The inside of the Rotterdam Ahoy in the Netherlands (Photo: Stijn Smulders, EBU)

For a long time in the build up to the 2021 Eurovision Song Contest, the idea of having an audience was no certainty. Depending on the nature of the pandemic, the EBU outlined four different scenarios for how Eurovision could emerge – Plan A being business largely as usual, and Plan D being a scenario when artists could not travel to the host country.

Ultimately most artists have been able to travel and perform in Rotterdam, and the situation in the Netherlands has been such that nine events, the three jury shows, family shows and live shows respectively, all have an audience this year.

The headline key difference is that the number of attendees is down, with the 16,000 capacity Rotterdam Ahoy only holding a maximum of 3,500 attendees. However, to get permission for the show to go ahead with even this limited audience, the Eurovision Song Contest had to register as a Fieldlab Event.

What Is A Fieldlab Event?

In collaboration with the Dutch government, Fieldlab Events are a collaboration of numerous different fields, including interest groups, scientists and the public, but ultimately the events industry. Together the “joint ambition is to test various elements…of health and safety that can provide insight into the possibility of easier limitations to event organisers”. In short, running these events is a testing bed to see if other events and hospitality enterprises can re-open sooner rather than later.

Given that there are many hundreds of people in intensive care for COVID-19 in the Netherlands, there is still much caution about what scope such events can have. For example one of the restrictions is that anybody over the age of 70 is not allowed to attend any Fieldlab Events at this current moment. The name of each ticketholer must be registered at least one week in advance, and each attendee must have two different apps on their phone. The application Close is used for scheduling a free COVID-19 test in one of many locations around the Netherlands (these are rapid tests, and must be done at a maximum 24 hours before showtime) and also the application CoronaCheck, which is where the Government stores the information about if that test was positive or negative.

Getting inside the arena is more regulated as well, with each person being given a time slot to arrive so as to avoid crowding around the venue. On entering, face masks must be worn at all times you are on the move – they can be taken down once you find your seat. And everybody has a seat. The standing arena by the stage, commonplace since 2013, is now replaced with a larger and socially distanced green room. The nearest fans will therefore be tens of metres from the action. 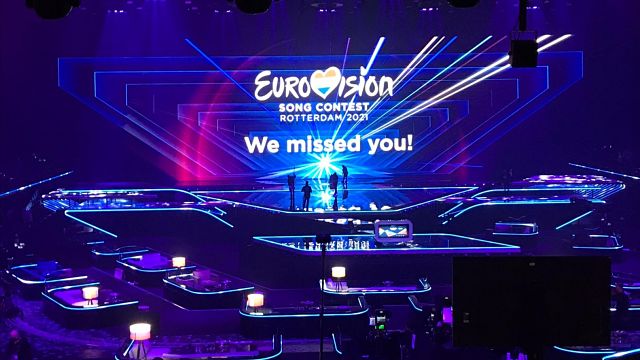 These are the steps required for this year’s Eurovision Song Contest to go ahead. The final criteria to allow for the event to take place was a reduction in the numbers of people in the Netherlands in intensive care with COVID-19. That number was over 800 when the EBU confirmed there would be an audience in Rotterdam and has been gradually dropping since. Had those cases instead increased in the meantime to over 900, the Dutch government had already confirmed that would have blocked all Fieldlab events from continuing, and the Song Contest would have had no audience.

So let me take you to what happened in this first Semi Final.

One Of The Most Historic Semis

Tuesday night saw the sixteen songs in this year’s 1st Semi Final compete to qualify to the Grand Final. This was already the third show held in the Ahoy so far, with an audience of 3,500 in the arena there to witness the fireworks, feelings and cheer for their favourites.

After the show I spoke to Dutch Eurovision fan Jurry Joosse. Rotterdam 2021 was now his 10th Eurovision Song Contest, the first one being back in Copenhagen in 2001.

His day began by taking the obligatory test for COVID-19, and waiting a nerve wracking twenty minutes for the test result that meant entry into the Ahoy that evening would be doable. The test result was negative.

On arrival at Ahoy the audience was scheduled to arrive in time slots from 18:30 to 20:00, yet already there were masses waiting to get into the venue. Groups were allowed to mingle, but otherwise social distancing was encouraged in the line. Further to that, Jurry tells me that masks had to be worn around the venue, but not when seated for the show.

And when the audience was seated, and the camera panned round to show them, we witnessed an arresting scene that has not been visible on live TV in recent memory. The striking thing is that the 3,500 members of the seated audience, maskless, are not spread out around the arena. Instead there are two blocks of them either side of the stage all sitting shoulder to shoulder. It is easy to feel perplexed, surprised and anxious witnessing this on television after a year of being conditioned to observe social distancing. But then one is reminded that these are Fieldlab Events, that everybody had been tested that day, and creating this environment was scientifically necessary to test the effectiveness of said events for the future. 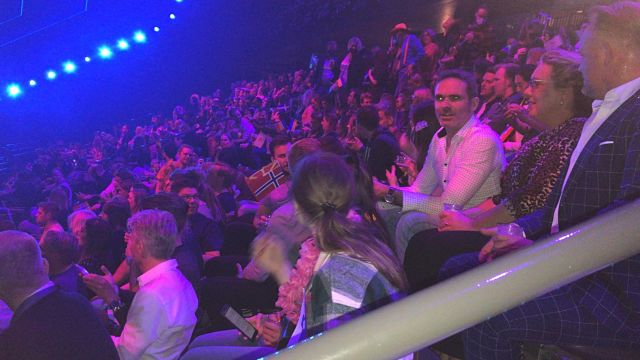 The audience in the Rotterdam Ahoy (Photo: Jurry Joosse)

Yet this environment also created an atmosphere. A stunningly special atmosphere. These Eurovision fans were warmed up by Eurovision hits and a video showing the highlights of the last 65 years of the Contest. They were well fuelled up by fries, frikadeller and beer. They had all tested negative that day and, allowed to sit side-by-side. For the first time in a long time, sitting in the arena, they were free.

“It felt so great to be normal again,” said Jurry, “There were no restrictions once we were in our seats. We could scream, shout, just have a good night.

“It felt so nice to go crazy again.”

And go crazy they did. When ‘Discoteque’ opened the show, one couldn’t help but hear the whooping, the cheering, the clapping along to the beat and the buzz of the room being felt by The Roop as they gave a supercharged performance. We are well used to Eurovision audiences being noisy and passionate, but this felt like it was on another level, like the audience was letting out all the excitement that has been over a year in the making. 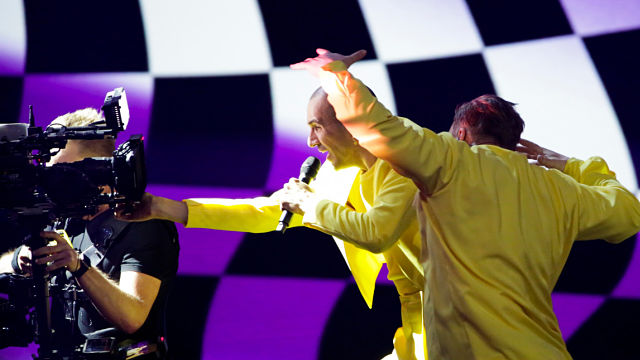 Differences From The Normal Production

One new feature that the EBU have co-ordinated for this show uses the Eurovision app. Using it during the show, the amount of applause noise that would be added after each performance could be manipulated by the viewers at home. For this year, and this scenario, this is a terrible idea. If we had a situation without an audience, that level of interactivity and engagement would be a fantastic addition. But the canned noise was fighting in the sound mix with the genuine cheers and energy that made the Rotterdam Ahoy magical. Even at the non-televised Monday night jury final while I listened via the online press centre, I was hearing one of the most passionate Eurovision atmosphere’s ever experienced. At the live show it was up a notch, and should just be allowed to roar.

There’s also the difference of demographics. The audience in the Ahoy for all of this week will be dominated by Dutch citizens, as far fewer people have travelled through to The Netherlands in these times. That obviously means there is less colour and less diversity in the audience, but also that there are less people as a percentage who we can consider to be hardcore fans.

Thirdly and finally, on leaving the venue, you leave into nothing. The Fieldlab event is an oasis of freedom in a country where restrictions are still strict. By the time one leaves the arena in the event the rest of society has shut down. While normally Jurry would be scurrying off to EuroClub or joining mates for a post-show drink and catch-up, instead one leaves the Ahoy to a dark and lonely world. All there was for Jurry to do was find where the bike was parked and head home. The Eurovision bubble burst as soon as you left the Ahoy.

Bringing Back The Emotions

While in many ways the show is different, given these juxtapositional times, the value of it and the value of being there and witnessing the songs perform live is priceless. After a sterile National Final season in heartless TV studios, the buzz of the live audience gave the show an energy that I forgot existed. Not just me but an entire community was emotional at the energy and lift the audience gave to the entire experience. I’m sure it was even better to be there.

“There are so many restrictions in my life and in my work,” Jurry continued, “and I’m just feeling so blessed that I could be a part of it.”

“The show looked the same, felt the same, and it was just so special to be there after this year.”

And there’s more shows to go to, as Jurry has tickets for all six evenings this week. And, of course, that means six COVID-19 tests to match. One hopes we never have a Song Contest like this again, but that doesn’t mean that this experience wasn’t very special indeed.

4 responses to “Inside The Rotterdam Ahoy, Eurovision’s Bubble Of Freedom”