Melodifestivalen 2021 is well under way. By the time tonight’s fourth heat is finished all of the acts will have performed and the hit finalist songs will be released to the masses. Who of these 28 is in the mix for victory, and who wants to have that crowning goal of going to Rotterdam? Ben Robertson reports.

The Mamas on stage in Melodifestivalen 2021 (Photo: Stina Stjernkvist, SVT)

The 2021 edition of SVT’s Melodifestivalen unsurprisingly saw big names within Swedish music take part in the competition. We are not talking about the First Aid Kit or Zara Larsson level of names (although they did sing in the final episode of SVT quiz show ‘På Spåret’ together), but the level of artists guaranteed to grace the TV magazines and gossip columns. It’s part of the reason that this year’s show has had a bumper viewership and also a record number of voters in a Melodifestivalen heat.

If we go back to the first heat, it featured two previous winners of the show in Jessica Andersson and Arvingarna. Veterans of the competition, neither of them have expressed that their return is with any kind of Eurovision Song Contest ambition. Jessica brought the Olympic-anthem-esque ‘Horizon’ to the Melodifestivalen stage; her appearance gave her a chance to focus on something positive. “It means so much for me this year to go up on the stage and sing again after a year like this,” she told the Norra Halland newspaper.

For Arvingarna the story is similar. They were in the competition as recently as 2019, and found that ‘I Do’ gave them new fans, especially from the younger generation. They came for another piece of the same pie, and ‘Tänker Inte Alls Gå Hem’ is a dansband schlager aimed at appealing to the entire population, and will appear in the Grand Final.

But that is far as the Arvingarna dream goes. Their goal with this song is to feel the same love from the Swedish population and “to keep their fans”, said band member Casper Janebrink.

A similar story is presented by Danny Saucedo, who just on star power alone was the pre-contest favourite to go to the Song Contest. However from day one Danny played down his chances, telling Aftonbladet he “isn’t in the competition to take home it [the trophy], and that he has grown away from that.” He further explains that, due to the pandemic, Melodifestivalen was the only creative outlet available to him, and that his appearance this year is all about “getting the chance to take part in Sweden’s biggest entertainment program.” 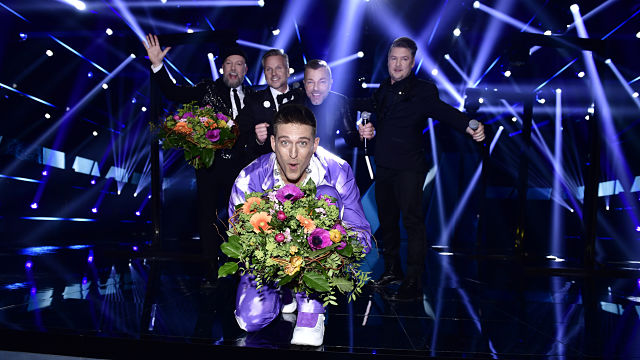 This is a phenomena that I think is difficult for many people not living in Sweden – and not understanding how the industry here works – to understand. Most of the artists taking part in the six-week long 28 song extravaganza are not aiming for the first prize at all. Remember that Melodifestivalen is more than finding a Eurovision winner, it is entertaining a nation.

Tonight’s show for example features two Swedish language tracks that offer a level of introspection often missed in the razzle dazzle of glitter and glamour. Lovad’s ‘Allting Är Precis Likadant’ is a beautiful piece in a style much similar to Molly Sandén’s latest offerings, and Clara Klingenström’s ‘Behöver inte dig idag’ is the penultimate act of the 28 – alone with an electric guitar and plenty of strong emotion. 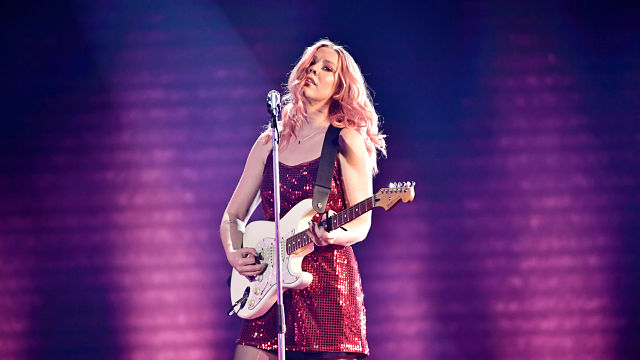 Competitively the consensus is that these songs will need miracles to even come close to a Eurovision appearance. But Melodifestivalen is not at that stage of the competition yet. It seems sometimes that it is only by the time the final rolls around that focus switches from what Sweden enjoys to what Sweden wants to represent itself at the Song Contest. That’s deliberate on the part of SVT as well, the final has international juries that award half of the total points; at these early rounds it is only the votes from the public that count.

Many songs are like Clara’s and Lovad’s in not being competitive for the final placings, and those I mentioned above by Danny Saucedo, Arvingarna and Jessica Andersson can apply here too. These artists were on stage to give a good performance, show their new style and to keep their old fans adoring them – and be in the mix to make the huge finale in March. But never threatening any more. And it can’t be underestimated how much that alone can be success.

And the same can be said about so many of this year’s acts, like it can every year. Melodifestivalen has been infected year-on-year by Latin flavoured beats, and Alvaro Estrella’s song ‘Baila Baila’ the 2021 chosen piece of summer-sunshine. There’s an audience in Sweden both for him but also this style, but the sound is a derivative one that will be chanceless when the competition picks up.

But being a part of the competition in itself is victory, as Alvaro has a huge hit once again. He got knocked out in Andra Chansen just one week ago, but already is his 3rd highest streamed song on Spotify as a soloist. His previous Melodifestivalen attempt, ‘Bedroom’, has nearly ten times the number of streams as the song in second.

There is no better way in Sweden to get a hit than to take part in circus Mello.

The Favourites And Their Path To Victory

The result of this is that Melodifestivalen’s six week tour always seems to resonate around a small group of favourites in the final mix for victory. The few standouts have creative songs and performances, yet still hitting that essential pop vibe, mining out golden nuggets that consistently see Sweden at the top of the leaderboard.

But if I run through this year’s list of favourites, I’m not sure if the intention was to create a Eurovision contender from any of them. Speaking in an interview to Schlagerprofilerna, Dotter explained that ‘Little Tot’ was originally dreamt up to be music for a possible interval act appearance at Melodifestivalen, and that the record label pushed it to be a competitive song instead. They know how the industry works. If we exclude the song ‘Walk With Me’, a duet with Måns Zelmerlöw, it is Dotter’s two Melodifestivalen entries (even her 2018 song ‘Cry’ that finished second last in its heat) that top her streaming data. As cool as interval acts are they don’t ever get that kind of traction.

That is an opposite story to that of Tusse, the 2019 Idol winner who came through Heat 3 last week. In speaking to ESCXtra Tusse explains that he was not looking to enter Melodifestivalen, but was in a songwriting session with the team behind his track ‘Voices’. He left that session without taking part, but he eventually was convinced that this was a song worthy of submitting to the show with him as the lead artist.

Similarly Eric Saade is closing the heats with ‘Every Minute’; a song that he describes as a sexy, addictive yet dark pop number. Eric’s previous three attempts in Melodifestivalen, include his victory in 2011 with ‘Popular’. Speaking on the Eurovision Legends podcast Eric has spoken about how competitive he was in the ‘Popular’ era, but now aged 30 the mentality has changed. ‘Every Minute’ is a riskier entry, Eric explains, and this year’s track is “totally different” compared to his rivals with their “made for Mello” compositions. All that said, Eric’s biggest motivation for competing in 2021 appears to be due to one man, Christer Björkman. Speaking to Aftonbladet Eric explains that with this being Christer’s final year, he is taking part to thank him for the support he gave Eric early in his career, and to give him the best possible chance to end on top.

This journey through the four favourites culminates in last year’s winner, The Mamas. It may seem like, after last year’s Eurovision cancellation, that they are here for unfinished business and are in this with Rotterdam as the end goal. They certainly appear far more coy, and said to Eurovision Buddies that they “didn’t plan” on returning to the contest, but it was the creation of their entry ‘In The Middle’ that convinced them to take part once more. Mamas member Dinah Yonas Manna explains that there’s “not a pressure to win, but an obligation to record this song and send it out to the world”.

A New Sweden With A New Outlook

I moved to Sweden in 2011 in the aftermath of Eric Saade’s victory. I remember my first Melodifestivalen in 2012, still in Globen, where Danny Saucedo was very much the competitor, the gladiator, trying to take pop music to the max in order to be victorious. That whole feeling, that Melfest is a battleground, doesn’t seem to exist this year.

And as much as there has been the Måns Zelmerlöw and John Lundvik who have also come with the winner-take-all attitude in recent years, I feel 2021 is different. The artists in the mix are competing for a love of the songs they have written, or to give it a platform, and there’s very much a ‘c’est la vie’ feeling to if Sweden chooses their song to go to the Eurovision Song Contest or not. When the twelve artists line up for the final on March 13th I don’t sense an attitude of ‘I have to do my best to win’, instead those in the mix are in the show to do their thing, and to let whatever happens happen.

Perhaps it’s an impact of the different world we are in today, a feeling of gratitude when all concerts and tours are cancelled that there is still Melodifestivalen as a beacon of light to share your artistry. It certainly helps with this that Melodifestivalen isn’t your average national final. For many just getting to the final, the biggest TV event in the country, is winning in itself. For hundreds and thousands of others each year, getting to the live show itself would be a huge victory. 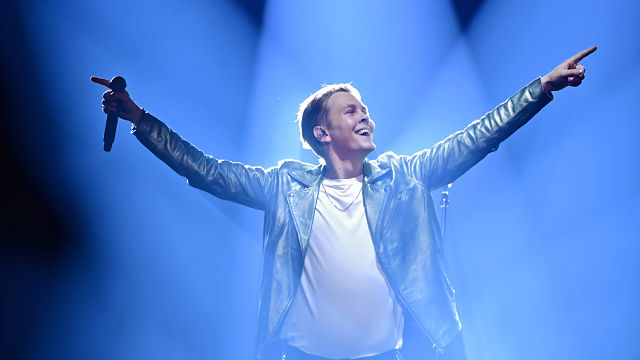 For somebody like Eric Saade, who knows how to play and win this game, to be happy to gamble with something as brave as ‘Every Minute’ will show you tonight is a blessing. It’s one thing for Arvingarna to deliver what you, and their fans expect, and it will deliver safe entertainment. But it’s another thing to deliver something that nobody is expecting and be comfortable with the increased risk of…failure. Because remember, you can avoid taking the risk, and do what is expected of you, and still get your biggest hit of the year.

But there’s nobody here who is explicitly in-it-to-win-it. Instead they are here to do their thing, or showcase something new, and the competitive world on the scoreboard is only the aftermath. If their song performs in Rotterdam in May it is merely a bonus. Sweden is a nation in the Eurovision Song Contest not necessarily known for musical risk-taking. Maybe this new mindset from the 2021 crop of artists is the start of a new era.