What Is On The Junior Eurovision 2020 Playlist? Written by Ben Robertson on November 28, 2020

The European Broadcasting Union asked our Junior Eurovision artists to submit a playlist of songs to put online. Those songs tell us so much about the tastes and styles of music our 2020 artists love, and about who they are as people. Ben Robertson gives you the lowdown.

As part of the preparations for this year’s Junior Eurovision Song Contest in Poland, the European Broadcasting Union asked a variety of questions to teach of our acts. These questions were not always the most insightful, for example asking artists if they prefer morning or evening, or crisps or sweets (morning and crisps for me). However one section of these set questions gave a fascinating insight into the cultures and interests of our young performers.

The 12 participants were asked to submit up to ten songs to show what would be on their playlist.

This gives us oldies (I’ve just turned 32, I feel I can call myself that now) a way to see what the next generation has playing between their headphones.

The below word cloud shows each artist included on the Junior Eurovision artists playlists. The bigger the name of the artist, the more songs by that artist that were submitted on the lists. 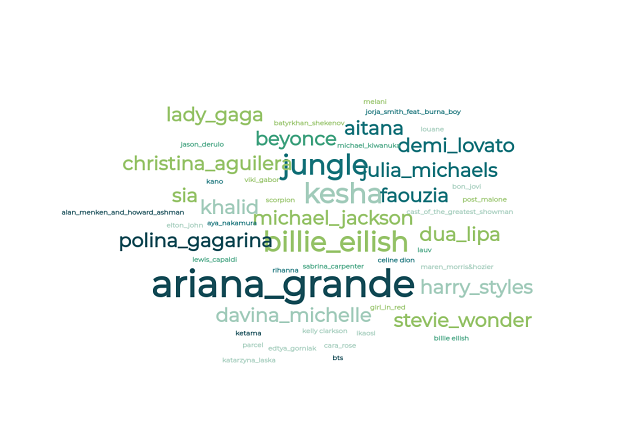 As we can see the biggest name on the list is Ariana Grande. Five times her songs were selected to be on the participants’ playlists, including her hit tracks ‘Seven Rings’ and ‘Stuck With U’.

Ariana Grande may seem like an obvious name to be top of this list purely from her music alone, with a catalogue of global hits and numerous worldwide tours to her name. However that also ignores the role model that she is to young people. Behind the perfect choreography and pop production are often well-crafted messages reflecting not just issues like female empowerment but also on the many bumps she has had in the industry’s spotlights.

One of the most notable examples of her ability to ride through terrible times comes from 2017. After one of her shows in Manchester, England, a bomb exploded killing in total twenty-three people. What happened had a deep impact on the singer, and she has been praised for her role in the aftermath of that terrible situation.

Furthermore, Ariana Grande is somebody well aware of her place in the spotlight, and of the pressures of being a role model to so many. Speaking to the BBC in 2018, Ariana said that “If I’m going to be a role model, the last thing I should be is perfect because that’s not realistic. As long as I’m honest and genuine and I share with my fans my truest self, that’s the best that I can do because that’s allowing them to do the same thing.”

Being honest, genuine, and able to try your hardest but not worry about imperfections are qualities I would like our young performers to have. They clearly appreciate that as well.

A Wide Variety Beneath A Pop Covering

Other prominent names on the word cloud, picked by numerous of the JESC 2020 cohort, include the likes of Kesha, Billie Eilish and Beyonce. It is little surprise that pop dominates the airwaves, and furthermore little surprise that English language pop is a uniting force across the European continent.

However underneath that is diversity in many other ways. The first of those reflects geography, and a wide variety of the other artists in the word cloud come from the same nation as their representative. Sofia Feskova representing Russia chose two Polina Gagarina songs for her playlist, and Valentina from France chose Amir’s latest summer hit ‘Le Fête’.

There’s another bit of diversity in era as well, with songs by legendary artists such as Stevie Wonder and Michael Jackson finding a home amongst listeners two generations later than they were making music. There’s also music that reflects the backgrounds of the different artists, Solea from Spain selected songs from her flamenco background, and Sofia from Russia is showing her musical interest in choosing ‘Beauty in the Beast’. For those interested who the Eurovision fans are the group is, Sandra Gadelia from Georgia was the one to choose ‘Euphoria‘, while Chanel Monseigneur from Malta included last year’s Junior Eurovision winner ‘Superhero‘ in her mix.

Furthermore these playlists are full of numbers that wouldn’t normally fit or be comfortable in children’s programming. Susan, the 13-year-old representing Germany in their debut entry, features songs from rappers 24kGoldn and Saygrace which feature liberal use of profanities. Similarly different is the choice of British band Jungle by Ukraine’s Oleksandr Balabanov, featuring in three of his ten tracks. Jungle’s musical style is incredibly grown up, and more likely to feature on music programming way past the bedtime of many of our artists.

We Need To Be Reminded Of What Junior Is Today

This year’s Junior Eurovision cohort ranges from 9 to 14 years old. These modern day young people are listening to vibrantly eclectic musical genres and are proud to celebrate that diversity.

There is though a stark contrast for many of them in the styles of music they are performing and what they are listening to. Be it the word ‘Junior’ or the word ‘Eurovision’ that is the influence, but as a general rule there’s a lack of edge and attitude to many of the 2020 Junior Eurovision entries. Instead what we have is music that is public serviceably appropriate for young people to be seen singing. Some of the songs are still brilliantly emotive and creative and are fantastic compositions, but they might be slightly ‘younger’ in mood than what our artists are listening to away from the stage.

And it is important to remember that it is that way round. There is a general perception that some Junior Eurovision compositions can be too dark and mature for such young artists. Based on this data if anything Junior Eurovision should grow up to meet the styles of music that young people, including our artists, actually listen to.

Just without the swearing.