The Greta Effect at Junior Eurovision Written by Ben Robertson on November 20, 2019 | 1 Comment

Nineteen songs take part in Junior Eurovision 2019 in Gliwice, Poland. Of those nineteen songs there is one common theme that stands out across the songs. Saving the planet. And ESC Insight’s Ben Robertson sees this as the result of Greta Thunberg’s global influence.

Who is Greta Thunberg?

Greta Thunberg is probably the most recognised climate activist in the world today. Her activism first made headlines in August 2018, when each Friday the then 15-year-old would skip school, instead taking her ’School Strike for Climate’ banner to the steps of the Swedish parliament for her solo protest.

The simplicity of the message resonated, and Greta inspired young people from Sweden to Europe and soon enough the entire globe. Within a year, thousands of school children have protested the impacts of climate change in cities across the globe. Greta became the media-fronting face of the movement, with her diminutive stature at odds with powerful rhetoric aimed squarely at the face of politicians across the globe.

As Greta puts it, ”we are striking because we have done our homework, and they have not”.

Greta is now one of the most prominent influencers of young people in our modern society. Behind her is a movement of passionate young people. Passionate because they have grown up in a system that has seen our Earth’s climate crisis getting more desperate, despite governments being aware of it throughout their entire life.

The Two Influences of Greta

This year’s Junior Eurovision Song Contest features many songs of an environmental nature. Kicking off with the Portuguese entry ’Ven Conmigo (Stay With Me)’, Joana Almeida sings of how young people today know the ways to save us from the climate crisis.

Furthermore, the lyrics directly tackle the concept of climate change denial. Using the user-generated translation available on lyricstranslate.com, here is the second verse.

“I hear that everything is normal
That global warming is false alarm
But I am afraid, I live in a sea of green
That can be destroyed by fire and drought”

Fires and drought have become more often and more severe in Portugal, with the summer of 2017 a particularly impactful year with 120 people dying in wildfires. This is no coincidence, and Joana herself was forced to flee her home during that terrible heatwave. The 10-year-old has been spreading news of that herself on Junior Eurovision fan groups via social media. 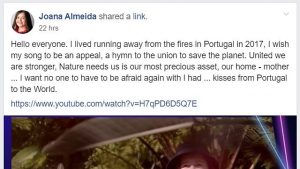 Similarly, the Italian entry in this year’s competition is another cry for help for planet Earth. ’La Voce Della Terra’, translating as ’The Voice of the Earth’ is a song describing the beauty of our planet, but that it is us humans that need to come together to save it from destruction.

“Now
The voice of the earth
Is calling for your help
In every wave of the ocean
Listen
Wake up, it’s not a dream
We can become a team
To heal and save the planet”

That same concept is one shared by the Spanish composition ’Marte’. 12-year-old Melani Garcia is looking at the damage humans have done to our planet, and how our planet is calling for us to help.

” Sorry, I have plastic in the waves
and secrets that I can’t tell.
I don’t have blue water anymore,
If you don’t want to see the world end like this,
you must defend the life in me”

’Marte’ is the Spanish name for the planet Mars. In the chorus of the song comes a call to use your voice as the tool to make a difference – with the idea that you send your voice as far as Mars so that everybody can hear your message.

This brings us into the second way that Greta Thunberg has influenced this year’s Junior Eurovision Song Contest. It’s one thing for young people to care about the environment, and both the Eurovision Song Contest and Junior Eurovision have had their fair share of environmental songs. What Greta has directly changed is the idea that young people have the power to use their voice to make a difference. Greta Thunberg has commanded audiences with politicians across the globe. Wanting to save the planet is no longer enough for this generation. They demand to be heard.

Serbia’s composition ’Podigni Glas (Raise Your Voice)’ is a prime example of this. The balkan ballad has an environmental theme like the others, but is a call to action for this generation to make a stand against the destruction, and the lack of attention this has from our political system.

Most striking is the music video, with the ending a particularly powerful piece of cinematography. Behind the artist Darija Vračević is a choir of children who dramatically collapse to the ground while the message ’We don’t have a planet B’ pops us. It’s incredibly powerful imagery. 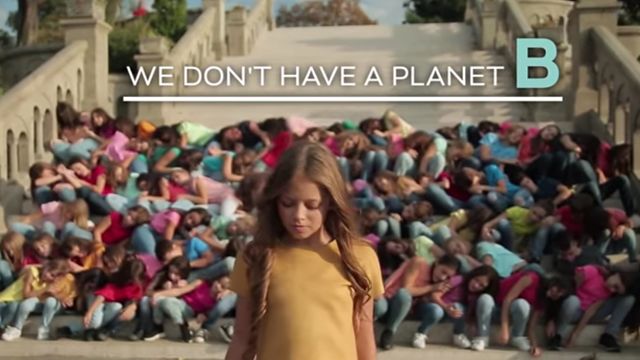 Ending shot from the music video of the Serbian entry

Lyrically, this song also has more power in the message given to young people.

I note particularly hear the lyric about making some noise – it is not just the action that is important, but the idea that young people need to change and challenge society to make a difference. This isn’t just about being listened to, this is forcing people to listen.

This theme of youth uprising appears even without the environmental backdrop. Malta’s entry ’We Are More’ by Eliana Gomez Blanco takes on this idea that the young people of today no longer want to be silenced and want to set a new agenda for the planet.

While not explicit in the text, the song leads us to believe that ’they’ refers to those in power currently, and the ’we’ refers to the movement of young people across the planet.

The final song I want to draw attention to in this review is the smash hit ’Superhero’ from Viki Gabor representing the host nation Poland.

”Do you know what we’re fighting for?” the song begins – with a story that unfolds about how the fight is for love and Viki wishes to take you ’far away’ to build a new world where one can ’be free’.

A fair enough and empowering topic, for sure, but it’s what happens after the song in the music video that is most notable. A voice, presumeably Viki’s, gives a one line piece of spoken word.

”Save the world. Planet is my home”

This is no environmental song (if there’s any message here, it’s a message to fight for the right to love freely), but the use of the word ‘planet’ rather than ‘world’ gives off a vibe that there is also a demand to save our Earth from destruction. This is the style of the time – a prime example of how the movement and media attention giving to the cause that Greta Thunberg has been championing is impacting our young people. There was a small window to make a message in this song, and it was taken. Whoever made that decision to include that line didn’t want to miss the opportunity.

This Is All Far More Than Politics

The aim of Greta Thunberg’s ’School Strike For Climate’ action was to deliver climate change to the top agenda point across the politics of the planet, and to demand for far more ambitious change than we currently are.

In that sense climate change, or at least limiting its devastating effects, is a political issue.

However school curricula from Lisadell to Latvia have been teaching about climate change, its impacts and how we can solve the crisis for far longer than our young artists have been alive. And it’s taught not in politics class, but in science class, geography, technology. Italy is soon dedicating a separate subject to climate change for one hour per week.

In an education context climate change isn’t any more of a political issue than the French Revolution or Pythagoras’ Theorum. Young people are being taught at school about how terrible our rising greenhouse gas emissions are, and are being taught about ways these can be reduced. These are facts, but facts about their future. Facts that need action.

If all this climate talk is too political for you, then point your finger at school curricula around the world. We teach our young people that dramatic change is needed to make the changes necessary. They are putting that into song.

Or are they? Many of the songs in Junior Eurovision are written nowadays by adults with minimal influence from children. As I see it, the campaign that Greta Thunberg has inspired has also inspired these adult lyricists, who have channeled that into their music. Adults, using a young person’s voice, to influence the script given to another young person. It’s almost as such that Greta could be a co-lyricist on each of these songs.

Digging deeper, I note that five of those six songs I have highlighted for this article have been internal selections (only Poland had a National Final, but as discussed the song itself doesn’t follow the general theme). Even above the level of a composer, is there a wish from broadcasters that themes of environmentalism and empowerment are the right messages to have young people sing about in the current climate?

We should also note that the furthest east we reach in our environmental song countdown are the fringes of the Danube river. As much as we talk about this as a global movement, the microcosm of Junior Eurovision suggests there’s been less interest in this topic from the former Soviet states. Many of them used National Finals, but even within those contests there’s nothing of the same conviction and message that is featured in this selection of songs.

To me that speaks more about where the ’School Strike For Climate’ campaign has gathered attention. German broadcaster DW reports on how Artsak Makichyan often protests alone in Moscow, unable to get permission to organise larger protests. The Russian artists themselves were asked to comment on Greta’s campaign. 9-year-old Tatyana Mezhentseva believes that skipping school is a ‘strange’ way to protest, and questions if the world is getting any better through the action’s of Greta Thunberg and others. Her duet partnert Denberel Oorzhak agrees, saying ‘I think that people need to study, but protest by other means.’

It’s easy to see how the issue hasn’t hit the mainstream in some cultures compared to others.

Nothing New For Our Song Contest

Environmental songs are nothing new for Junior Eurovision or the Eurovision Song Contest, and that’s not going to be any different in the future.

What is notable with the 2019 edition of Junior Eurovision however is not just the quantity, but the powerful language about being part of the movement for change and demanding better. It is the message of this era and they are saying it loud and proud.

Climate change is to 2019 what uniting the continent was to 1990. The 1990 Eurovision Song Contest was packed full of songs about knocking down walls, bringing people together and living in a world of hope and love.

The songs in that contest were just as ’political’ as the ones in Junior Eurovision today. They are reflections of the current climate, reflections of the facts of the day, and not one of the statements in any song sparked controversy.

“I am a big fan of Greta Thunberg and what he is doing to save the planet is very important.  Governments have to listen to us because although we are small we have a lot to say. I hope to contribute a grain of sand to this cause with this song,”

One response to “The Greta Effect at Junior Eurovision”