What Can Marcel Bezençon Teach Us About Hosting Eurovision 2020? Written by Ben Robertson on March 16, 2020 | 1 Comment

ESC Insight’s Ben Robertson looks back on the Eurovision Song Contest’s founding principles of testing the limits of live television broadcast technology. Are there any lessons for the Song Contest in 2020?

Update 18 March (Following the cancellation of Eurovision 2020):  As you know I wrote earlier this week suggesting and advocating for the satellite method. Didn’t expect the need to make this decision so quick either way. In its statement the EBU have emphasised the importance as an event of Eurovision, and the need for an equal platform:

We felt that under the extreme circumstances we face this year, organizing the Eurovision Song Contest in another way would not be in keeping with our values and the tradition of the event. The unique format of the Song Contest as an international live event means that it is not possible to identify any realistic alternative. We therefore have no choice other than to cancel the show.”

The host country for this year’s Eurovision Song Contest, The Netherlands, has started to implement local restrictions due to the spread of coronavirus. As I write this, the restrictions are in place until Monday April 6th, and include the cancellation of any event of more than 100 people.

The European Broadcasting Union made a statement regarding the upcoming Eurovision Song Contest – set to take place in Rotterdam this May. In its statement, the EBU acknowledge the “current spread of coronavirus” across the world, and it is “closely monitoring the situation”. However “no final decisions” have been made, as the EBU work with the Dutch broadcaster and the City of Rotterdam to “explore different potential scenarios”.

There is a lot of speculation in the community around those scenarios. Perhaps it’s best to go back to the beginning and ask if the principles of Marcel Bezençon offer a potential solution?

Marcel Bezençon is known today as ‘the father of the Eurovision Song Contest’, and was an EBU director from its inception in 1950 until 1970. As part of the Swiss broadcaster SSR, Bezençon was one of the pioneers of television broadcasting in its infancy, being the first to negotiate television rights for the FIFA World Cup and heading up the EBU’s Programme Committee. In 1955 it was this group that had idea for a multi-national competition of song first appeared.

The Swiss broadcaster was keen to host the event, and Lugano was the destination for the first ever Eurovision Song Contest the following year.

Part of the goals of starting the Eurovision Song Contest was to create a cultural event for all of Europe to enjoy. Using the Sanremo Music Festival in Italy as inspiration, the original rules sought to make the song the focus of the competition. Drafted by Léo Wallenborn (then Director of the EBU’s Administrative Office) the Song Contest was to “encourage the creation of original songs and stimulate a spirit of competition among authors and composers through international comparison“.

However in equal measure the goal was to ’”test the limits of live television broadcast technology“. Before the Song Contest came to town Lugano had no television, and while television was still an incredibly expensive venture (the number of TV sets around Europe would have been in the thousands rather than millions) seven different networks took the transmission live, with another thirteen taking it on delay. It was a huge step of collaboration and trust for post-war Europe to make and the resulting contest became the basis of the Eurovision tradition we all know and love today.

If the European Broadcasting Union is exploring alternatives for 2020, does Bezençon’s foundation for the Eurovision Song Contest provide the blueprint?

Stay Home And Carry On

One possible scenario would be for everybody to stay in their home country and use the power of satellite technology to send their song out to Europe and beyond. Co-ordinated by the EBU and hosted by Dutch broadcaster AVROTROS, satellite links would take in footage from each competing country during their three minutes on stage. Satellite links are of course nothing new for modern Eurovision, having been a part of the voting process all through the 21st century. The new part is using them to transmit the performances themselves.

This scenario fits Bezençon’s criteria because it still gives the songs chance to flourish, as well as testing the collaboration of live television broadcast technology. The songs that the artists and songwriters have spent ages writing and preparing for millions will get their moment to shine. Last year’s winner ’Arcade’ managed to top charts in Belgium, Estonia, Iceland and Luxembourg. This would not have happened without the show being primetime entertainment across an entire continent.

Obviously there are a number of features that would be lost. The presence of Rotterdam would be diminished  thanks to no Ahoy Arena with its expensive and innovative stage. Instead we would be asking competing broadcasters to host at home, likely in a local TV studio, with the number of people able to be in the audience in each country likely to be closer to double digits, potentially even limited to that in many nations. Even combined that’s some way off the 15,000 expected for Rotterdam’s hosting.

Denmark’s hosting of Melodi Grand Prix illustrated what would be lost if the Song Contest was held ‘behind closed doors’ with no audience. What that show had in fireworks and confetti it lacked in soul, and as a TV spectacle it was surreal without the thousands of fans in attendance. For it is the thousands upon thousands of fans that make the true energy of Eurovision on the ground. Their flag-waving euphoria is as much the spectacle as any miniature hot-air balloon or human-sized hamster wheel.

Danish broadcaster DR had Copenhagen’s Royal Arena rigged for MGP before it had to close the doors to the audience. Would Rotterdam’s Ahoy Theatre be ready for such as show? It takes a significant number of crew many weeks to rig a venue for Eurovision  – last year M&M Productions started the build for Tel Aviv on April 2nd and you can’t ask a technical crew to work from home. 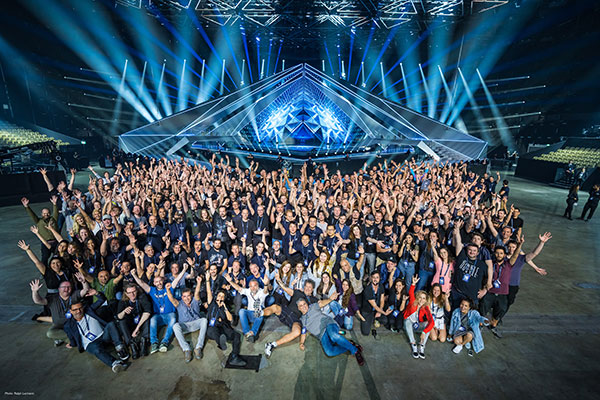 A New Solution To An Old Show

Relying on satellite-links for our songs means allows us to look at an issue that hasn’t been discussed since that very first Eurovision Song Contest. On the table in 1956 were two proposals; one to allow each country to bring their own production team and produce their entry; and the other, as we have had it ever since, to let the host broadcaster produce the show themselves. A satellite-link competition will have to hand over production of each entry to each participating broadcaster. How much more does that make the Eurovision Song Contest a contest of production rather than song?

The Eurovision Song Contest normally equalises the playing field by giving each broadcaster the same access to all the features of stage design and camera shots. The gulfs in budgets between broadcasters could appear even larger in a satellite-link show, but these are exceptional times calling for compromise and collaboration… after all the biggest power of the Song Contest in 2020 may not be in the competition.

Cultural life in Europe is approaching a standstill as borders close, theatres cancel shows, and sporting competitions are postponed until further notice. Despite the coming of spring there appears to be few distractions over the coming months as I write this article. These are a pivotal few weeks for the whole of society.

The type of Eurovision Song Contest discussed here would be different. Without press on the ground, social media will be more importance in the build up to Grand Final, That show would consist of 26 intimate one-song gigs rather than one packed-out arena showcase. And our host city would be unable to fully engage with the Contest for the traditional fortnight of events.

The EBU and the Dutch broadcasters can still run most of the show elements as planned. The likes of Glennis Grace or DJ Pieter Gabriel can still perform during the Grand Final, but would also have the intimate gig feel. One significant loser in this satellite-link Contest would be Rotterdam. Two minutes of attractive drone footage of the Dutch landscape being beamed to TV sets from Lisadell to Latvia is hardly likely to make up for the pain of not being able to fully host the Song Contest.

The European Broadcasting Union was built on a founding ethos of solidarity and co-operation. It is in times like this when public service broadcasters must work together on a solution. To take one example, the cancellations of sporting events in the United Kingdom has seen the Premier League highlights show Match Of The Day replaced by an four-year-old episode of comedy show ‘Mrs Brown’s Boys’. The risk is real that come May, Europe could be entering a cultural desert without events or joyous occasions to look forward to.

There may a different build-up to the Contest, the hundreds of journalists telling the story would also be covering the show remotely, but a Eurovision Song Contest this May could become one of the most anticipated, irrespective of the format.

41 broadcasters uniting for one night of music, song and celebration would have a powerful meaning. It would highlight our co-operation, trust and technology, and it would give our Eurovision artists the chance to share their music on the biggest entertainment showcase on Earth. That showcase isn’t necessarily the physical stage they were expecting, but the scale of the event would remain. I’ve interviewed many a Eurovision artist in my time covering this competition. When I ask artists about their reasoning for entering I invariably get the same answer; ‘I want to perform to millions of people.’

The Eurovision Song Contest’s glitz and glamour is part of that, as is performing on the flashiest stage with the world’s best production crew, but the Song Contest is more than that for an artist. It is about letting each artist share their music and message to as big of an audience as possible.

If he were alive today I believe Marcel Bezençon would look to cutting-edge technology to bring the 2020 Eurovision Song Contest to the world. In 1956 the Song Contest was a beacon of community in a fractured Europe.

The importance of that come May could be even more profound.

One response to “What Can Marcel Bezençon Teach Us About Hosting Eurovision 2020?”