Just a couple of hours before the Eurovision Grand Final, a tiny flurry of activity happens backstage. A small awards ceremony takes place for three small prizes, collectively known as the Marcel Bezençon Awards. To find out more about this tradition ESC Insight’s Ben Robertson spoke to the founder of the prizes, Christer Björkman, to trace a history of the low-key ceremony from the beginning to this very day.

In modern Eurovision the entire fortnight of build up to the Grand Final enters those final few hours with a surprising amount of relaxation. All of the press work has been complete, the run throughs on stage are in double figures, and all that is left is the final touches of make-up, hair and Instagram uploads before one final performance. In this oasis of calm a few of the artists get a little buzz late-afternoon. A message gets passed on in the early evening, via their Head of Delegation, to meet in the social area backstage between all the dressing rooms a couple of hours before the Grand Final kicks off.

Heads of Delegations will know what this is about, but it’s a surprise for many artists. It’s an invitation to attend the Marcel Bezençon prize ceremony. The ceremony itself is a gentle affair not to distract too much from the big show coming up. The winners are briefly introduced, get to say a little thank you, and then whisk themselves away to complete their preparations.

This year was the fifteenth year that the Marcel Bezençon Awards were given out, with the first year of awards given out in 2002. It was in the summer of 2001 where the first ideas for such an award process were first thought through.

Diggiloo-Diggiley Life Is Going My Way

Back in 2001, Christer Björkman was still enjoying a career in the music business. Whilst more well known nowadays as the man behind modern Melodifestivalen and as Contest Producer for the last two Eurovision Song Contests in Sweden, he got into these gigs through his own career. Undoubtedly the highlight of which would be representing Sweden in Malmö during the 1992 Song Contest, which makes any Swede an overnight household name. The summer of 2001 was one of the last where Christer would be touring around Sweden, and in the close knit world of Swedish schlager he spent much time with Richard Herrey, lead singer of the Eurovision winners the Herreys.

Around Sweden that summer, one of the big summer hits that year came from the Contest just passed from Copenhagen, and no, it wasn’t ‘Everybody’. Instead all over Sweden the breakout artist was a young girl called Helena Paparizou who sang ‘Die For You’ for Greece in the Parken Stadium. She only came third in the final vote but Richard and Christer both agreed that she was robbed. Both thought that they should try and do something about it, the result of which is the awards we know today.

The model was taken from the film festival circuit. Here there may be an overall winner, but also there are winners for different categories. In film, just like music, it is hard for the viewer to only have one personal favourite and many different types of film work on different levels.

Christer and Richard had a plan and found support to make it happen. On virtue of being Executive Producer for the 2000 Contest in Stockholm, Svante Stockselius was on the EBU Reference Group. He was supportive to the idea and helped convinced the EBU to let it kick off in 2002. Soon afterwards of course Svante Stockselius took over as Executive Supervisor for the entire Eurovision Song Contest with Christine Marchal-Ortiz stepping down post-Tallinn.

Changes Through The Years

The first awards were given out in three different categories; the Press Award, Artistic Award and the Fan Award. Eagle eyed readers will note that this is changed from the current rules, where the Fan Award is now replaced by the Composers Award. (Swedish fansite, Poplight, did co-ordinate a fan vote in 2008, but it never got the traction sufficient to continue) Christer explained that this happened because of all the in-fighting that took place within OGAE at the time and how much of this internal turmoil then came back to him. This lead to the need of an alternative, which was found by the unique viewpoints of the composers. Christer also pointed out that the Press are often made up of many people who may count themselves as ‘fans’ so there is already a good proxy for that demographic.

A similar change that occurred through the years is with the Artistic Award. Previously, this was given out by former winners of the Song Contest to vote for their favourite performance. At first, this was not a problem, there were a small but significant group of artists on location to cast their votes accordingly. However this sample group present each year was ever changing and unreliable. In the end many former winners hadn’t seen all the rehearsals or were not in the host city for the show. To counter this, rehearsal videos were sent out to all of the artists electronically. Few returned ballots. Therefore again the decision was taken to change this vote, and from 2010 to an award given out by the commentators of each country. For the first time this year all commentators cast their votes in the Artistic Award, which Jamala won ‘in a landslide’.

Interestingly, the votes here are given out on a basis of one commentator, one vote, and you can only vote for one act. This means that countries with more accredited members in their commentary team get more say overall, although the vote is meant to be a personal one, rather than just to vote for your host country. The same is of course true for the Composer Award (so both Joy Deb and Linnea Deb get a vote when they write a song for Sweden) and for the Press Award (Azerbaijan’s winning of the Press award in 2012 is popularly thought to be down to a overly patriotic local press). Despite previous dramas OGAE International still co-ordinate the Press Voting each year. This year each accredited press member could collect a unique code from their pigeon hole in the Press Centre to cast their votes online, which could be changed at any point before votes closed.

Of the three awards it appears the commentators, who usually cast their votes after watching Grand Final rehearsals, as being most correlated to the final results, with their last five winners finishing either 1st or 2nd in the Saturday night result. Speaking from experience, the Press Room voting is usually well under way much earlier in the week, and it’s little surprise to see a strong correlation between the results here and that from OGAE’s own multi-country fan poll. In thirteen runnings, ‘Euphoria’ is the only winner of the Composer Prize to go on to eventually win the competition.

Another change through the history of the awards is through the timing of giving out the prizes. Originally the awards were designed to be given out at the After Show Party, and this worked well for the first few years, although as you can imagine adding an extra serious obligation to everybody’s chance to let their hair down. The biggest problem occurred in Helsinki.

Due to Finland’s incredibly strict alcohol laws, the venue under no circumstances could be open after 03:00. Even the earliest artists leaving the arena had not left well after one in the morning, and most of the press missed the ceremony. That ceremony itself was incredibly rushed through, with artists scattered all over the way and one of the prizes having to be mailed home post-Eurovision. Now, with the acts being presented the prizes pre-show, the atmosphere is far more organised and congenial to the formalities of the prizes.

The Tradition Of The Marcel Bezençon Awards

Another particular difference, brought in for 2016, was that the award was actually presented in the Press Conference area, rather than just backstage. This is a symbolism of the official recognition the EBU give the awards which grows year on year. Although the ceremony has been filmed each year by eurovision.tv, usually it takes place in the closed off backstage area for the artists. This move brings the awards far more into the spotlight.

Being able to make these awards an official thing is important to Christer Björkman. After all there will be a time when he is no longer steering SVT’s ship and can’t take up this very personal project (the actual awards, made of glass, are currently hand produced in Sweden’s Skansen museum at the personal expenses of the founders) and long may it continue. Christer explained how there have been discussions with the EBU about ensuring compulsory voting as a part of a delegations’ duty. Christer explained that although this is certainly not his desired outcome, and with turnout increasing not a requirement on his side, such a move would have the benefit of having the awards officially recognised as a part of the Eurovision programme of events.

For some people, the awards don’t matter too much – and certainly they happen too late on the Saturday for most press to pick up on it pre-show. It was infact for this reason why the equivalent awards have been pulled from Melodifestivalen. The Marcel Bezençon Awards steadily became comparatively frivolous to artists who were already happy at having achieved so much in that crazy Melfest bubble. They launch themselves into a country-wide fame circle regardless of a little trophy or not. 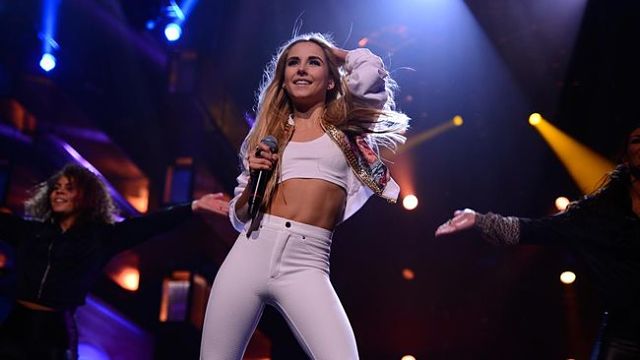 Isa won the last edition of the Artistic Award at Melodifestivalen with her performance of ‘Don’t Stop’ (Photo: Stina Stjernkvist, SVT)

In the Eurovision Song Contest that is a far less truer picture, with only a handful becoming true continental wide known names. These awards can matter a lot to many people. Federico Llano, Head of Delegation for Spain, often tells Christer about how pleased Beth still is with receiving the Fan Award in Riga in 2003. Zeljko Joksimovic is proud of his two awards from 2004 and 2006, to the point it still stays on promotional material for his summer tours today. Israel’s hat-trick of awards in 2010 ensured Harel Skaat could leave with a head held high despite only coming away with a 14th place in the Grand Final after an under-par performance.

The Marcel Bezençon Awards allow for more acts to leave the Eurovision Song Contest with something to be proud of, but importantly without diminishing the main competition. Naming the awards after the founder of the Song Contest was an easy and quick decision for Christer Björkman to take. Nobody would have anticipated in a 1950’s boardroom just how spectacular the Contest would become, and to name it after the founding executive is a great historical gesture. The Marcel Bezençon Awards add value to the Eurovision Song Contest brand and share even more love for the competition. Long may they continue.