Melodifestivalen is the envy of all national finals, and once again had the highest viewing figures in Swedish television for 2019. Why is it such a colossal TV event? Ben Robertson explains some of the reasons why.

Melodifestivalen is the most watched TV show in Sweden, constantly competing with the traditional airing of the ‘Kalle Anka‘ cartoon at 3:00 p.m. on Christmas Eve to be top of the Swedish ratings. Melfest is arguably an even stronger Swedish tradition beginning in 1959, one year before SVT first showed their selection of Disney cartoons to the nation.

As the name suggests Melodifestivalen is a festival of melodies…or less literally a song contest. The winner  represents Sweden in the biggest pure entertainment competition on the planet – The Eurovision Song Contest.

But arguably nobody loves Melodifestivalen and Eurovision as much as the Swedes. It’s only Sweden that has these sky high ratings (with a staggering 80 percent share of the audience) and has made it an annual tradition to fit 30,000 fans into Friends Arena to watch Melodifestivalen live. 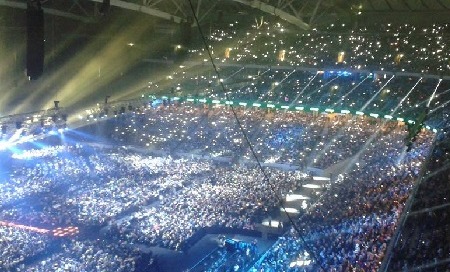 Why does Sweden go crazy for Melodifestivalen?

Their history is certainly part of the answer. Sweden is one of the most successful countries in Eurovision history, with their six wins the second highest number, just one win behind Ireland. Some of those winners are household names in Sweden, and the lives of Carola and Charlotte Perrelli fill the gossip columns. However their first Eurovision victory came in Brighton in 1974, by a four-piece group known by the initials of their first names.

ABBA was the name, and worldwide pop legends they became.

ABBA’s rise to fame has certainly acted as a catalyst to bring big name artist to Melodifestivalen through its history, but also successful songwriters and producers. Unlike many other TV talent shows, Melodifestivalen requires artists to come with new, unreleased music. Sweden leads the way worldwide in making pop music as the largest exporter per person on the planet, and Swedish pop in particular consistently comes with infectious melodies and high production values.

Regularly the songs taking part in Melodifestivalen dominate the local charts. After last year’s final seven of the top ten songs in the Swedish singles chart were from the show. What is notable about this list is not only how Melodifestivalen dominates, but how diverse the set are. These songs included a romantic pop duet, a dramatic ballad, a 15-year-old with something reminiscing about early Michael Jackson, a Sami jolk blended with Swedish pop melodies and bubblegum pop from a band known as Dolly Style. That’s not to even mention last year’s winner, John Lundvik, the British-born Swede behind ’Too Late For Love’, a song that started as a ballad and grew into this up-tempo, gospel- flavoured powerhouse.

The diversity of the previous paragraph is key to Melodifestivalen’s success. It is the big production each year by SVT, Sweden’s public broadcaster. A key part of their broadcasting is that Melodifestivalen should be ’Hela Sveriges Fest’ –  a party for all of Sweden. There should be songs for every generation to love, from preschoolers to pensioners.

This year we’re promised songs in all varieties with artists established for decades competing against social media superstars of a new generation. We’re promised songs reflecting all aspects of Swedish culture from Latin flavoured beats and urban rap to schlager and dansband – two musical genres of hideously infectious sing-and-dance-a-long nature that are strongest in Sweden. We’re promised drama and suspense as a winner is chosen alongside a script that has the difficult challenge of having something there for everybody to laugh at.

2 responses to “Why Melodifestivalen Is Sweden’s Biggest TV Show”