The stage has been cleared, the kids have all departed, and the Junior Eurovision bubble once more has well and truly burst. ESC Insight’s Ben Robertson reflects on what we have learnt from another successful contest.

Partying in the Green Room during the Final of Junior Eurovision (Photo: Thomas Hanses, EBU)

The modern take of Eurovision scoring systems splits up the jury scores from the public vote For us who follow the Contest religiously we now have our heads around the drama this creates in the final few minutes of programming, but it’s not a easy for the public.

Some of our hosts in recent years have come unstuck with the voting presentation. The tweaked system that debuted in Tel Aviv, where points are read out in jury score order, does make the broadcaster’s job easier to tell the story of ‘who’s in first and challenging for first’ during the process.

The downside with the new system though is the potential for failure to be visible on screen (as seen in Tel Aviv, notably with Malta’s Michaela Pace and the Czech Republic’s Lake Malawi). It also puts more  focus on the jury winning songs rather than the public favourites.

We had huge concerns that the storytelling required in the voting sequence would be cruel on the Junior Eurovision performers. During Junior Eurovision we saw and felt the  tension, but we did not see failure on the screen. When scores were revealed the focus was on the hosts, not the artists, and the picture  cut to the Green Room when the results created a moment of celebration.

This is a much needed improvement from Israel where we saw such cruel moments of failure live on TV.

We also had an excellent host who clearly understood what was happening at every moment, how many points were needed and when to get excited as we had a new leader. Arguably Ida Nowakowska beat the benchmark of Petra and Måns from 2016’s scoring sequence, and would be a great example for any future host. The few complaints about her impartiality during Poland’s victory are unfair, as soon as we know that point  of victory has come, the party has already started, and the job of a host is to convey that excitement..

Poland might need another Eurovision host in…I don’t know…twelve months time. She would be a great choice.

This Should Be Game Over For This Version Of Voting

Two days prior to the day of the final we published the article ‘Are Poland Unstoppable In The Online Vote?‘. In fact they smashed the online vote more than we ever imagined, 62 points ahead of second placed Spain. Considering the impact of voting for three to five songs was designed to spread out the impact of a heavy favourite, it is no hyperbole to call this a landslide on the scale of ‘Fairytale‘ or ‘Euphoria‘.

With more knowledge and awareness of how Junior Eurovision works as a competitive event, broadcasters with resources used the voting window to push hard in a classic ‘get the vote out’ campaign. Some of these broadcasters used all the tricks of the trade, from shout outs from celebrities, throughvoting instructions in news bulletins, to huge website banners linking straight to the voting pages. This game was a learning experience when it was introduced in 2017. Now it has been mastered. 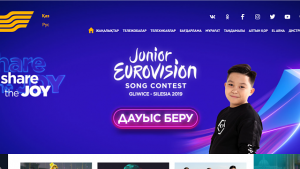 Homepage of Khabar Agency the day before the Junior Eurovision Final

This engagement is great for the Junior Eurovision Song Contest as a production. However the correlation between larger countries and broadcasters doing well in the online vote is just staggering. Poland, Spain and France make up the top three, with Albania, Wales and Malta at the bottom end. Junior Eurovision is a competition for children and way the system works increases the unfairness, turning the public vote into a popularity contest rather than a musical contest.

I would say it would be harder for a smaller delegation or a broadcaster with a smaller budget to find a path to Junior Eurovision victory with a good song than the Eurovision Song Contest. That doesn’t sit easy at all with my ethics of a childrens’ competition.

In short, for all the benefits of the online vote, it is too powerful. It needs to be weakened to level the playing field. One obvious option would be to alter the voting split away from 50/50 and bias towards the jury. You could go further and have the online vote, an adult jury, and a kids jury, each with a third of the points.

A change is needed.

The Beginning Of The End For Press Conferences

The individual artist press conferences after each rehearsal were scrapped by the EBU, and we applauded the decision earlier in Junior Eurovision week.

As expected it gave broadcasters more time to cover media requests as they wished, and many of then voluntarily hit the Press Centre for interviews with the different sites. So much so in fact that the press centre became too busy and noisy to be effective, and some interviews took place in the corridors. Breakout spaces will be needed to cope with this demand in the future.

However some press conferences rightly remained, namely those held by the EBU and the host broadcaster regarding the Contest. These were a great way of getting quotes on the record from the Contest’s executives.

The Joint Press Conference held on Saturday afternoon with all the artists’ was not a good use of anyone’s time. The hosts going round each artist one by one for a ‘group question’ that was as safe as possible (such as favourite foods), left little time for the press who got the chance to pick out one artist at a time for a question.

The planned Meet and Greet session following the press conference with the artists was shortened to just 15 minutes and many delegations rightly didn’t bother at all… perhaps something to do with scheduling it less than two hours before the Jury Final?. A meet and greet looked the best solution beforehand – one session where nineteen questions could be asked at the same time to nineteen delegations at once – would create far more content.

Melodifestivalen in Sweden has a lot more experience with this method. The artists all come onto stage, smile for the camera as a big group for the press and are immediately led to their own individual table. Each interview can’t take more than a couple of minutes, and priority goes to press members reporting for broadcast media so they can collect the material they need for news bulletins etc. I recommend the EBU head out for a busman’s holiday and visit  the Arctic Circle in February to witness this in action. 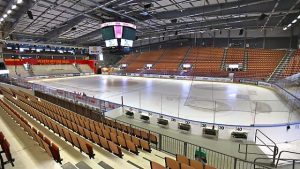 The First Rehearsals Are Definitely Not For Us

Journalists at the 2019 Junior Eurovision Song Contest were not allowed to see the first forty-minute rehearsals for each act on stage. While not an extensive survey, most press we spoke to accepted the need for that change.

And delegations are quietly pleased. Multiple costumes can be tried without being discussed, camera angles can be worked on without worrying about the performance, technical faults can be fixed before we need to see it. The very first time on stage should be their time, not our time. 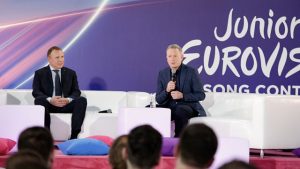 At the EBU Press Conference, Jon Ola Sand suggested that there are no plans for this change to carry over to the Adult Contest in Rotterdam, although they might close off the “very first run through” from journalists’ eyes. Frankly, that is a weak compromise. Screens off for the first three minutes may be good for a technical check , but it doesn’t give delegations the chance to experiment or to make any changes following that first run-through without the media hype-train watching.

Make the decision to close the whole rehearsal, or leave it totally open. The suggested middle ground is a horrible compromise that satisfies nobody. Junior Eurovision has proven that a closed rehearsal period works in terms of making a good TV show, while delegations has shown that the media can still engage with the artists in the first few days.

The argument has already been won.

How Big Can Junior Eurovision Get?

The Junior Eurovision rule book states that between 12 and 18 countries can take part. In 2018 and 2019 we have had more countries than the regulation’s upper limit, thanks to each Contest getting special dispensation from the EBU.

Poland’s top level production and commercial success as a winner is likely to motivate other broadcasters to take part. For a 2 hour 30 minute show one can assume twenty songs would really be the maximum in terms of Contest. The Steering Group should have that conversation early in the planning for next year to avoid upset and disappointment in later stages.

As the production becomes larger, the division between broadcasters in terms of production becomes clear, both musically and visually. While little can be done musically, visually the gulf between the haves and haves not is huge, and just paying for extra hotel rooms for a week is a prohibitive cost for some delegations. Are there little steps that could be taken to equalise the playing field that would increase the overall impression of the show further?

A Foundation For The Future

The Junior Eurovision Song Contest has been seen as a testing ground by the EBU. Some ideas, such as the ‘Flags Of All Nations’ opening introduction of the artists have been integrated into the Adult Contest. Other ideas have not made the jump or reflect the unique nature of November’s Contest. The EBU and its members can learn a lot from this year’s Junior Eurovision Song Contest.

5 responses to “Five Lessons From The Junior Eurovision Song Contest”