EuroNoize: No Borders, No Limits Written by Ellie Chalkley on July 10, 2019 | 4 Comments

ESC Insight has been following the EuroNoize avant-garde song contest with great interest. Ellie Chalkley reflects on her experiences reporting on the contest from backstage, and considers what it means to be able to speak freely about music, politics and gravity.

What if there was a parallel universe where Eurovision was just a little bit different?

As someone who loves the weirder edge of the music that Eurovision offers up, I was hugely excited to find out about the EuroNoize project, where eleven widely varying underground and DIY bands from around Europe competed on stage at London’s Scala for a trophy designed by Laibach’s Ervin. Back in April, I interviewed Pil and Galia Kollectiv, who are the artists responsible for bringing the project into existence – if you listen to the recording you can hear my interest levels going from ‘high’ to ‘near infinite’ in real time.

This initial meeting eventually and quite naturally led to a situation where I dealt with my 2019 PED by hugging a bright green member of Winny Puuh.

The EuroNoize project intended to examine some of the fundamental assumptions that support nationhood, Europe and Eurovision (which we’ll also refer to as “The Other Contest“). How does international competition in the arts work against an environment of developing far-right populism? What parts of the European experience do we have in common? What does it mean to represent a country? What can you actually do with a song contest?

The EuroNoize format will seem hauntingly familiar to Eurovision fans. Each act is introduced by a video postcard which describes the nation that they represent, and then they perform a song roughly three minutes in length. There were two hosts whose duties included introducing the artists, exhorting the audience to vote and the traditional unscripted banter. There was also a backstage/greenroom host to ask ridiculous non-sequitur questions of the artists as they came off stage, and if you watched the livestream or came to the gig, you’ll know that greenroom host was me. 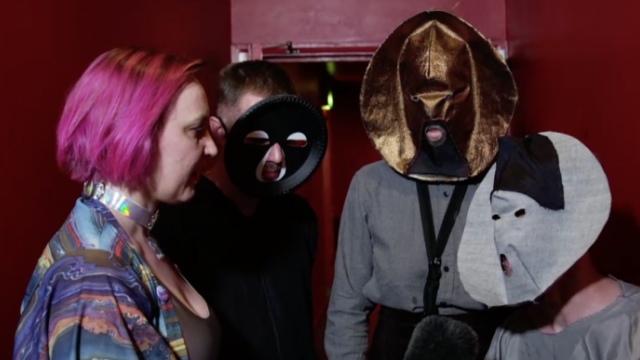 Ellie at work in the green room (Euronoize.eu)

I wanted to give the participants the full Eurovision experience – the chance to explain what their song was about, to talk about the visual aspects of their performances and to say whatever was on their minds. Before the show, I’d asked all the artists to think about what they might want to use their time to say – I wasn’t wanting to ambush or put pressure on anyone.

EuroNoize was operating under different principles to The Other Contest, and this gave us a lot of freedom to talk. Some artists used their interview time to have fun – the German artist Felix Kubin had a serious problem with gravity, the Czech band Johnny The Horse were concerned that their definite article was observed, Golden Core from Norway told me about free-roaming wild metalheads and Estonia’s Winny Puuh were concerned that I didn’t know about the brutal swamps that plague their homeland.

Some of the other bands wanted to use their time to make statements: the Serbian band E.P.P. wanted to dedicate their song to Čika Boća, which they told me was a ‘beloved political figure’ but which turns out to be a charitable organisation for children with cancer. Greek representatives The Callas intoned a set of political slogans that culminated with ‘Stop Brexit. Or Whatever’. The French representative Hassan K wanted to talk about how racist it is that music which centres non-Western creators is called ‘World Music’. The Russian band Asian Women On The Telephone wanted to tell me about the bodies and secrets in the river in Moscow. Some of the artists, like the Irish band Sissy, were comfortable to be both silly and serious. As well as admiring Michelle’s genuine Riverdance stage outfit and name-checking The Corrs, we talked about their contribution to the Repeal the 8th campaign and how women in Northern Ireland still don’t have access to safe abortion services (although at the time of final editing, maybe that is about to change?).

What Is There To Talk About?

Being able to talk to these bands about genuinely whatever they wanted made me realise how much the restrictions of The Other Contest hold me back. The rules about not politicising or instrumentalising the contest appear to apply just as much to people with press accreditation as they do to artists. Would we all be risking all of our accreditations if an artist wanted to talk to me about abortion rights, the idiocy of Brexit, the injustice of Fortress Europe or racism in the music industry during the contest?

There were so many times during the 2019 season where I would have liked to ask questions that would have been unequivocally political – I would have loved to talk to Tulia about how their love of traditional imagery and music sits against the Polish political environment of increasing nationalism. I would have loved to have a long chats with Mahmood and Bilal about intersectional identity, to talk to Tamara about the problems with commodified ‘Lean In’ feminism, to have a round table discussion with Jonida, Oto, Tamta and maybe even Eleni about the specific experience and pressures of being parts of populations with significant diasporas. There are so many in-depth stories in each contest that don’t get told because the format of Eurovision press forces us to concentrate on the surface, the headlines and the soundbite. When you’re optimising for traffic (as the Eurovision accreditation system encourages community media to do) there is a strong incentive to evoke the most emotion in the fewest words.

Most obviously at the 2019 Contest, the politics rule meant that no-one could really talk at all sensibly to Hatari. Despite thinking they could ride their satire through loopholes in the woolly and imprecise wording of the Eurovision rules, they found that same woolly imprecision was used to almost totally silence them, under threat of disqualification and a fine to their broadcaster.

The imprecise nature of the Eurovision rules on what constitutes ‘politics’ surely has a chilling effect on the subjects that we are willing to talk to Eurovision artists about. If one year we can have an extremely emotive interval act that describes the lives of refugees and the very next year a contestant can be threatened with disqualification for wearing a jumper in support of refugees, how are we supposed to know how much we can talk to Madame Monsieur about ‘Mercy‘? If you don’t know where the line is on a potentially difficult subject, a consensus develops where it’s safer for everyone to avoid anything with ideological weight. I know that’s not a good thing, and I’m not even fully trained journalist. 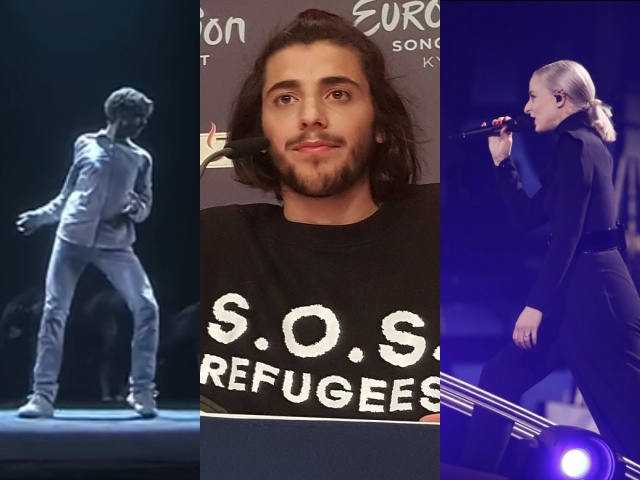 At the minute, political matters do come up but are often handled badly – see the genuinely upsetting way in which Mahmood was questioned about his heritage during his press conference, or the way that moderators do not step in to prevent antagonism between press corps members and artists from Azerbaijan and Armenia. It’s tempting to think that if there was a clarification of the rules about talking about political subjects, they could be handled with more professionalism.

One reason why complete freedom of speech worked at EuroNoize and why it might not work at Eurovision was that the EuroNoize bands had all signed up to be part of a project with a specific ethos of international collaboration and that ethos led us to all have complementary political views. The hosts, the bands and the audience were largely self-selected by their shared interest in a positive, inclusive pan-European ideal (whatever that is). If a rogue white supremacist band had turned up on the bill, I would definitely not have felt joyous about giving them a few minutes to share what was on their minds. Totally removing The Other Contest’s prohibitions on political speech would definitely allow views that people find unpalatable or offensive to be associated with the contest. Any changes made must consider the full consequences, intended and unintended.

No Politics Is Political

To claim to be apolitical is to silently adopt the set of norms and values that is most convenient and close to hand. In the case of Eurovision, it appears the adopted norms are those that do not embarrass or inconvenience the organisation, the contest or the hosts. When the contest heads to somewhere where adopting the norms and values of the hosts involves ignoring the human rights of groups of people, this apolitical stance begins to feel deeply political. When the Eurovision organisers set out the boundaries of what they consider to be political speech, did they ask who they would amplify? Did they ask who they would silence? Did they consider how this set of boundaries could be used against them?

This claim of being apolitical isn’t unique to Eurovision – when major sporting events like the Olympics, the FIFA World Cup or Formula One Racing claim to be apolitical, they also adopt the precise lack of politics that allows them to be hosted in locations which raise eyebrows.

As the world tries to come to terms with the global inequality of rights and opportunities, we need to look at our methods. One way we can bring people together is by sharing our art, sport and culture with each other, but at the same time we’ve got to be vigilant that the ways that we share aren’t silently reinforcing an unjust status quo.

But let’s return to the sweaty May night in London, where the voices of  those eleven fantastic bands were very much amplified. Musically, EuroNoize was just what I needed – loud, challenging and thrilling. The favourites going into the show were Winny Puuh, who effectively removed themselves from the running by playing two songs (and shouting a further third into my microphone backstage) but the competition was eventually won jointly by Ireland’s Sissy and Norway’s Golden Core. It has not yet been reported how they intend to split the trophy. 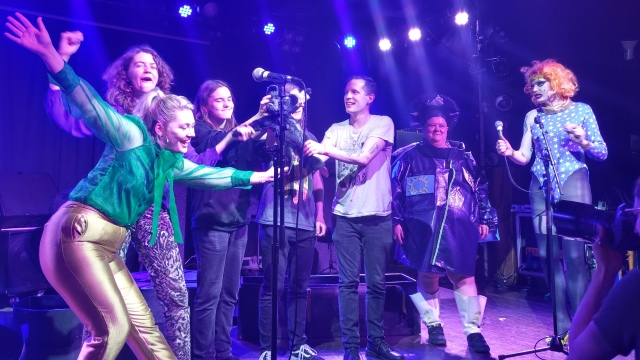 The very best part of EuroNoize was the same as the best part of The Other Contest – the beautiful sight of musicians and music lovers from different backgrounds meeting, getting to know each other, rocking out to each other’s songs and arranging future collaborations. EuroNoize was a pleasure to see and be part of. I hope we do it again.

4 responses to “EuroNoize: No Borders, No Limits”