Tell Me! How Delegations Use Rehearsal Feedback Written by Ellie Chalkley on May 6, 2018

How important is it for delegations at Eurovision to seek out the opinions and ideas of those watching the open rehearsals of the Song Contest? Ellie Chalkley looks at the importance of listening to feedback.

Why let people watch the first rehearsals at the Eurovision Song Contest? Because glaring missteps can be pointed out to delegations before any points are scored. If the performance contains cultural references or imagery that don’t translate across the Eurovision broadcast zone, or if parts of the staging really don’t work and the delegation have become too close to the project to be able to judge, then they’ll find out at the first rehearsal when the Eurovision community get their first look.

Rehearsal feedback must be rapid, clear and implementable: with 48 hours between the first and second rehearsals, (and no further chances to make changes after this point) making major changes at this stage are almost the last throw of the dice. Whether it’s actually appropriate to have unfettered commentary on the artists’ first steps on the Eurovision stage is another thing, but let’s examine how early feedback has affected some of our 2018 performances.

I Found My Army Strong

In the case of Finland, the early feedback came as a response to the UMK show. Saara presented three songs and all three contained lots of staging elements. Not all of them hit home with the section of Eurofandom that watches during national final season. The original stage show for Monsters featured a cape reveal, a petal drop moment, lasers, UV reactive costumes, dancers with dark angel wings, upside-down vocals, and a flag dance section. Early feedback was that they had incorporated too many disparate elements and creative ideas to fit into a single song. After the song was selected, YLE went as far as requesting feedback from the fan community on what exactly displeased viewers about the staging and how it could be improved.

When Monsters reappeared on the Eurovision stage on April 30th, the performance was streamlined, resulting in much clearer storytelling.

Look At Me, I’m A Beautiful Creature

Israel’s Netta and her stage show initially had people worried about the overall levels of energy and connection. Netta was behind her looper desk and she was separated from her dancers. By the time of the second performance, the camera shots showed that the dancers were forming a tighter group, Netta was displaying more of her cheeky energy, and that Netta was interacting more with her dancers.

However, any negative feedback about the incorporation of a wall of maneki-neko were not taken onboard.

This year’s choice to forgo the LED screen backdrop means that 22 of the 2018 delegations are using large staging fixtures, most of which contain their own lighting. Stage fixtures are ordered, built, wired and rehearsed far in advance, and changes may be impossible. While it would have been nice to be able to swap to the white light up doorway used in the music video, that prop is a 6000km drive away in Israel. Therefore, for better or for worse, the neko are staying.

Even if the lucky cats looked messy, were waving out of time, and had nothing to do with the song.

The Lithuanian delegation only made subtle changes to Ieva’s costuming as a result of the feedback from the first rehearsal. The most noticeable change was the display of the CGI overlay. In the first run-through, the images appeared in the middle of longer shots, which looked very jarring. By the second rehearsal, these transitions had become subtly dreamlike fades.  Even though sections of the press room have been arguing that the overlay images were not necessary, it is likely that the Lithuanian delegation will have invested sufficient funds in their production that they will still feature in the televised performance.

Have You Ever Thought About It?

In terms of responses to feedback, a delegation can sometimes give the right answer — but in a wrong way. Case in point: the costuming of Marija who is the lead singer of Macedonian band Eye Cue. Marija is clearly a fashion-forward woman, and it is lovely to see that she’s taken a playful fashion risk by having a reversed suit jacket as her stage outfit. However, it’s a risk that hasn’t quite paid off as the yoke and back vents of the jacket look confused rather than chic. When asked, a delegation source was quick to agree that changes should be made for the second rehearsal.

The change that was made for the second rehearsal was to pair the reversed suit jacket with mismatched red and blue trimmed hot pants and an artistic silver leotard with pink optical illusion contrast panels around the bust. This was certainly a change, but not necessarily a helpful one. This feedback quickly made its way back to the delegation. At time of writing, it’s not known which outfit will make it to the screen for the semi final. 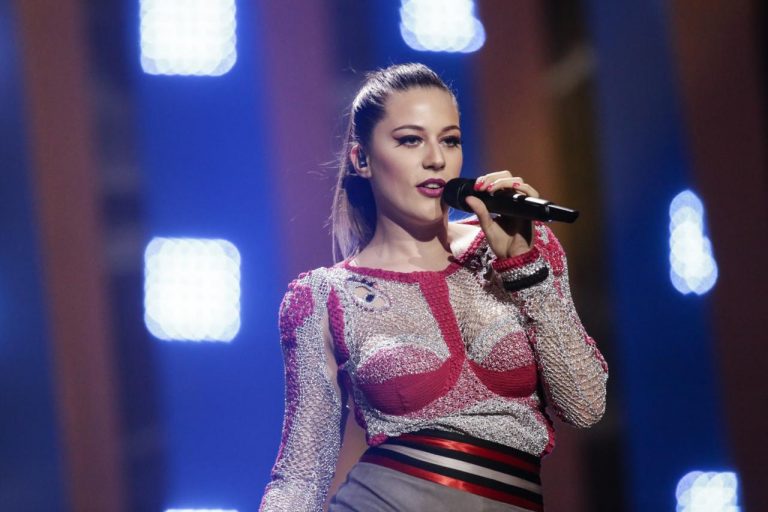 At the first rehearsal, Waylon took to the stage in a loud cheetah print coat, a guitar strap with his name on it, and his trademark hat. The real music enthusiast was not backed by his regular touring band, but by four dancers who begin the performance on a lower plinth than Waylon, performing with instruments for the first verse. In the second verse, Waylon points at each of the dancers in turn, who then break away to perform a krump routine. They return to the low platform, where they make deferential gestures towards Waylon in his rock star stance.

All dancers were men of colour, and the way that the routine was staged provoked a number of uncomfortable feelings from around the press centre. From confusion at what krumping has to do with country rock music to genuine shock at the lack of consideration of the racial optics of the performance, a significant proportion of those present had something negative to say.

Far from taking the criticism on board, Waylon and Dutch broadcaster AVOTROS took to the defensive. In the press conference, Waylon justified the staging choices saying ‘it’s called krumping and they call it the outlaw of dance’ and ‘it’s called country music and the country has cities, right?’. AVOTROS said “Team Waylon is satisfied with the first rehearsal. Now we are working hard to put the dots on the ‘i’.”

The delegation did not address the racial optics, although Dutch late night talk shows and newspapers addressed this with a strongly defensive approach, rather than the approach of  ‘listen, understand, change’ that media organisations might reasonably be hoped to use when they’re told that they’ve inadvertently made something that people find deeply uncomfortable. The second rehearsal proceeded with no significant changes.

Once more, with full pyro

For major elements like dance routines, props and the presence/absence of dancers, rehearsal feedback comes far too late. However, first rehearsal feedback can be a very useful tool for changing and tightening up the things that can be changed – costuming, on-screen graphics, lighting cues and camera shots. If delegations sift through and collate the thousands of words generated when their show first hits the stage, and they’re willing to listen and make changes, then having the first rehearsals viewed by national press teams and the hardcore Eurofan press can be a valuable informational asset.