Make Your Way To Minsk: Currency, Cuisine, And Nightlife Written by Sharleen Wright on November 16, 2018

Continuing our look at the host country of the 2018 Junior Eurovision Song Contest, Sharleen Wright explores what you can find in Belarus’ capital city of Minsk;  looking at the currency, the cuisine, and the night life.

What Can You Get For Your Rubles 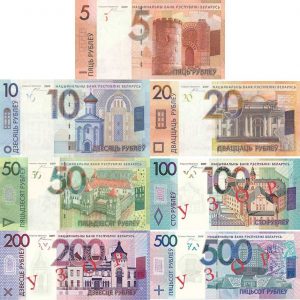 The country has a very low cost of living, and Minsk is the cheapest capital city in Europe. A McDonalds Big Mac meal would set you back just 8 BYN, whilst a restaurant dinner for 2 people comes in around 60 BYN.   A bottle of water is just 1 BYN, and a coffee or beer to drink would cost approximately 3.50 BYN.

Belarussian cuisine draws upon many of the dishes and influences of its neighbours, featuring homemade meat delicacies, cheese from cow or goat’s milk, and sweets made of honey, apples and cranberries.

Farmstyle cooking is featured in theme restaurants, and local staples can be found in canteen style establishments.  Visiting these, Belarus generally offers the opportunity to literally eat like a king for the budget of a peasant at lunch times.

Restaurant Kuhmistr is considered one of the best options, but the prices there are above the average. Soups cost from 7 BYN, salads and snacks – from 9 BYN, and prices of hot meals start from 15 BYN, but visitors are greeted with liqueurs and appetizers.

For something more casual and on the cheaper end of the scale, you can try Lido.  Here, you can load up a tray full of options to your hearts content – ranging from potato sticks, to cabbage rolls, beetroot salads and cheese curd desserts. 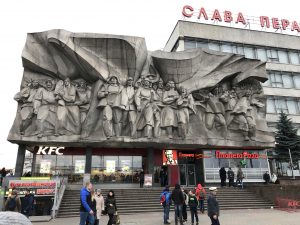 Would you like a side of military history with your fried chicken?

If that doesn’t tickle your fancy, Minsk offers many modern and Western restaurants, such as fast-food outlets including KFC and McDonalds, sit down chains and multicultural fare from China, Japan, Mexico, Italy and beyond.

Minsk is abound with pleasures to entertain everyone, be it a quiet evening of cinema or jazz, to a raucous night of clubbing.

The most famous nightclub within the city is Dozari, located on Independence Avenue.  It is the sort of location where you will find the latest Russian pop pumping out the speakers, and bouncers on the doors using face control.  Or if you prefer something with more guitars, you can try the TNT Rock Club.

There are a select number of cinemas across the city which show the latest releases in original language, including the Falcon Club boutique cinema located not far from Minsk Arena and within the Minsk Marriott complex.  Compared to most Western cinemas, tickets for 14 BYN are a bargain.

If you want something even bigger and better, Minsk features on the tour schedules of many popular touring artists from both East and West, in locations such as the Sports Palace, Prime Concert Hall and the State Palace.

During the period of Junior Eurovision 2018, you can escape and see the likes of American diva Anastacia on 20th November, or Eurovision alumni Alekseev and Ani Lorak on 18th November, both at the State Palace.