More Than Qualify: Cyprus Aims Higher Written by John Egan on May 3, 2018 | 10 Comments

Participating broadcasters put in a lot of effort behind the scenes to create their three minutes on the Eurovision stage. John Egan takes a look at the journey of this year’s Cypriot entry – ‘Fuego’ by Eleni Foureira.

The first week on the ground in the Eurovision press room can be something of a sorting exercise — and sometimes in cruel ways.

There are always previously fancied entries that unravel because of difficulties delivering a competent live vocal. Others stumble because of ill thought-out staging. And one or two artists always seem overwhelmed by the enormity of the Eurovision Song Contest stage. Different delegations’ prospects wax and others’ wane. And the reactions in the press room often serve as an indicator of all this.

For the first week the press room is largely full of fan press, many of whom arrive at the venue deeply invested in particular entries. We had nearly completed two long days of rehearsals for the first semi-final. With one more performance to come, many seemed to be waiting for that entry: the amazing one, the one that is undeniably good. By the final note of Eleni Foureira’s first run-through of ‘Fuego’ we got our moment. Team Cyprus blew the roof of the Portugal Pavilion.

If the recipe for Eurovision success is to create instant and sustained impact, Cyprus has cracked this for 2018. But it is a long road for a delegation to get to that first three minute rehearsal, particularly for a smaller state like Cyprus. Let’s take a look at the trajectory that Cyprus followed to create ‘Fuego’.

The Cypriot Broadcasting Authority (Ραδιοφωνικό ΄Ιδρυμα Κύπρο, CyBC) has a mandate to provide high quality local content in both Greek and Turkish. Television licence fees were abolished in 2000 so all the funding for CyBC comes from the budget provided from government. Cyprus has a population of a bit more than one million people. With a relatively high GDP per capita (around £25,000) CyBC’s Eurovision participation fee would be neither paltry nor exorbitant.

But the costs of putting together a Eurovision entry go beyond the fee itself. There are the costs of delegation travel to the host city (although Lisbon is much less expensive than a Scandinavian host city). And there are whatever resources are required to deliver an entry.

The Cypriot delegation have tried a range of strategies in terms of national selections over their three decades of participation. In the semi-final era they have often struggled to find success. CyBC took a year off from the Contest in 2014 after only three qualifications between 2004 and 2013.

Upon their 2015 return their Eurovision Cyprus’ fortunes improved. In 2015 a multi-stage national final was used to select John Karagiannis and ‘One Thing I Should Have Done’. In Vienna, Cyprus easily qualified for the Grand Final, but in a highly competitive year managed only 22nd place overall.

Running that sort of national selection is resource intensive, even if using existing facilities and an in-house production team. Subsequently CyBC has focussed on internal selections: in both 2016 and 2017 an artist was selected first and a song crafted around that act’s particular persona and genre. Swede Thomas G:son co-wrote both Minus One’s ‘Alter Ego’ and Hovig’s ‘Gravity’. Like Karagiannis they qualified for the Saturday night show; like Karagiannis they both finished on the right hand side of the leader board (21st place in both years).

If Grand Final qualification is a delegation’s main key performance indicator — and it would be a reasonable one for a smaller state that lacks support from a large, reliable diaspora — it will not have gone unnoticed by CyBC that other smaller delegations have won in recent years. Sure, participating in a festival can be worthwhile in its own right, but this is a song contest and every year there is a winner. After Portugal’s maiden victory in 2017, Cyprus is now the delegation waiting the longest for its first trophy: In 34 attempts Cyprus has three fifth place as best-ever results.

By September 2017 CyBC had rebooted and flipped their selection model. Alex Papaconstantinou (‘Alex P’) was hired to write the Cypriot entry: an artist would be selected thereafter. Papaconstantinou has form; his three previous Eurovision entries have each done well:

But Papaconstantinou’s pedigree goes well beyond the Eurovision. He has written or produced (or both) songs for Khaled, Jennifer Lopez, Marc Anthony and Nicki Minaj among others. He is one of a bevy of Swedish songwriters making an impact on the global music stage.

There was a lot of buzz about who CyBC might choose as their artist. At one point Helena Paparizou seemed to be in the frame (having record the demo vocal): doubtless securing a former Eurovision winner would appeal to any broadcaster aspiring to do well. Then Tamta, who has achieved some success in the Greek and Cypriot music markets, was the focus of speculation. Late in January CyBC confirmed that Eleni Foureira would sing ‘Fuego’ in Lisbon.

If the Eurovision world sorts out into Team Ballad or Team Banger, Eleni Foureira is definitively Team Banger and ‘Fuego’ is a banger of a song. Pairing the right artist for the right song is important. Next, the delegation required an entirely new level of work.

CyBC appointed Sacha Jean-Baptiste as Artistic Director for ‘Fuego’. Like Papaconstantinou, Jean-Baptiste has quite an extensive Eurovision resume, including ‘Love Injected’ (Aminata, Latvia, 6th, 2015) and ‘Beautiful Mess’ (Kristian Kostov, Bulgaria, 2nd, 2017) in recent years. Both are exemplars of her capacity to work with a delegation to craft three minutes of compelling television that leverages a specific artist’s skills for a television audience.

The pre-production phase for the entry was particularly intense for team Cyprus this year with up to five hours daily of running ideas, workshopping concepts, and nailing down choreography — all of which were very high energy. There are the support performers to sort out as well. Plus the styling. The total package, in other words. 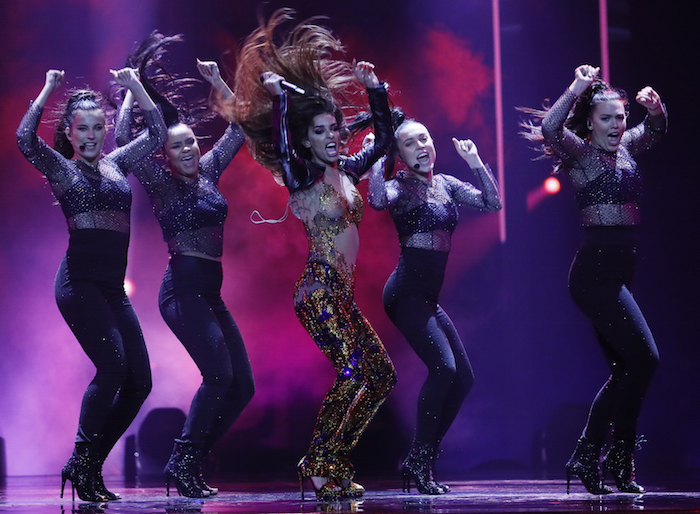 Keep in mind that Foureira is different from the three most recent Cypriot representatives. She is not a developing performer like Karagiannis or Hovig, nor is she an established Cypriot act trying to broaden their appeal like Minus One. Eleni Foureira is already a star in Cyprus and Greece. She has an existing fan base she cannot afford to disappoint. In other words, aspirations and expectations are big for ‘Fuego’ and Cyprus.

A Fan and an Artist

After that first rehearsal—and its several note perfect, crisply choreographed run-throughs—everyone wanted to talk to Eleni Foureira. Thankfully she gave us a few minutes of her time.

Foureira is a lifelong fan of the Eurovision Song Contest and is excited to perform on “one of the hugest stages and music parties in the world.” Entertaining an audience is what inspires her: “I’m dancing a lot—it’s what I do—I’m a performer.”

To succeed in the 21st century a Eurovision entry requires a cohesive narrative: it needs to deliver three minutes of compelling digital storytelling to a large and diverse audience. From the outset, Foureira knew what her story was in performing ‘Fuego’:

“With Sacha we choose to not bring props, to not do huge things, and we choose just to show our power and our choreography. Because sometimes you don’t need a lot of things to show what you want to show to people. We are dancing, we are living the moment completely. And we’re showing that women can be sexy and there’s nothing wrong with that. They can be powerful…they have fire, and they need to bring that fire, every time. Everywhere.”

This is a key element of many effective, sophisticated Eurovision entries: a package that works on the performance level and at the more subtle level of storytelling. Viewers or jurors need not be aware of both levels for it to get them to cast a vote. But it is an effective strategy. 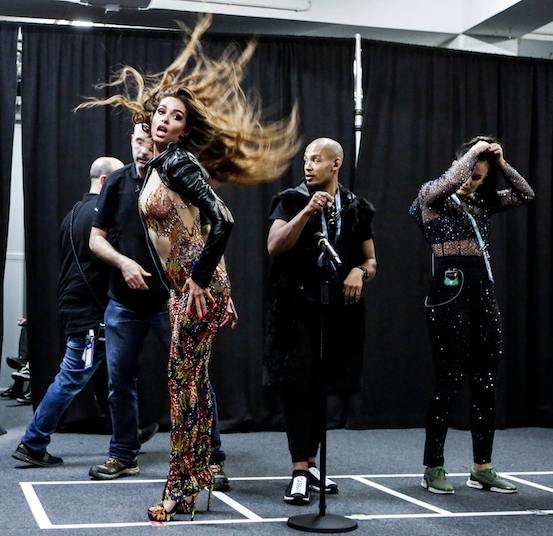 Team Cyprus 2018 does not see mere Grand Final qualification as their aim for 2018 either, though Foureira’s not setting too precise a target:

“Oh my God, everybody wants to win. It’s a lie if I say to you ‘I don’t care’. But I’ve never said ‘I’m going to win’ or ‘I’m not going to win, what place I going to get’. This is a disaster for an artist. It’s bad to think like this. If people vote for me and love me and put me in a good position, that’s amazing, that’s my dream. But I’m going to enjoy [the experience] and I want to make people remember me.”

Want to win. Get people to vote for me. Want people to remember me. There’s no ambiguity there. Eleni Foureira and the CyBC delegation have ambitions to do well this year.

Cyprus have drawn the highly competitive first semi-final. Qualification requires Foureira to deliver two equally important performances, for the juries and the public. Whilst most people here in the press “bubble” see Cyprus as one of a handful of near-certain qualifiers on Tuesday, it is live television and it is a contest.

We have yet to see any tweaks CyBC have made after their first rehearsal. Assuming qualification, there’s then two more performances before we know if Cyprus’s change in strategy for 2018 will have paid off.