As the first winner of the Eurovision Song Contest in 1956, Lys Assia’s place in the history of our Contest was guaranteed the moment the credits rolled over ‘Refrain’. But it was her passion for the Song Contest throughout her life that endeared her to the fanbase. Ewan Spence remembers her career and a playful sense of adventure.

Starting out as a dancer in her early life, one gig altered her life. Lys Assia’s ‘show must go on’ attitude saw her cover for a missing singer in 1940, and that was that. Dancing was her love but her voice became her career.

Like many variety performers in the forties and fifties, the explosion of feature films saw her picking up credits including 1952’s ‘Palace Hotel’ and 1995’s ‘Ein Mann Vergißt die Liebe’. But her musical career was where the action was, with hits coming throughout the fifties including ‘Moulin Rouge (Ein Lied aus Paris)’, ‘O Mein Papa’ and ‘Schwedenmädel’.

As the EBU’s first Eurovision Song Contest became a reality in 1956, Assia weighed up offers from Germany and Switzerland to attend the first Contest. Her German entry, ‘Ein Kleiner Goldner Ring’ remained in the National Final, but both ‘Refrain’ and ‘Karrussel’ were chosen by Swiss TV to be its two entries in 1956 (the first year saw seven entries, so everyone sung twice to bulk up the running order). As we now know, ‘Refrain‘ took the prize and – thanks to everyone forgetting to write down the scores – every other song, including ‘Karrussel‘, claimed second place.

As music changed shape in the early sixties with Merseybeat flooding the United Kingdom and driving the European Ye-Ye style across continental Europe, Assia’s popular music career fell out of favour. Following a final flourish with ‘Fühl’ Dich Bei Mir Wie Zuhause’ in 1964, Assia stepped back from the public limelight.

Although she continued performing throughout the years, technology and human nature would bring her back into the limelight with the Eurovision community.

The Rise Of The Recorders

During the eighties, with the rise of home video recorders, television moved from a record of immediacy to a historical document that could be studied and examined at a critical, cultural, and academic level.

As such, the Eurovision Song Contest became both a reflection of modern society and a mirror to remember cultural trends of history. A renewed interest and the increasing ease of access to the older shows from multi-generational VHS and Betamax video tapes, through home-burned DVD collections, and the almost on-demand ability watch any Contest online meant that the heroes of the early years were revived and thrust back into the spotlight.

The irony that the visual record of that first Contest is missing should not be lost on anyone, but Lys Assia’s position as the first winner, along with her willingness to engage with the growing community, elevated her to a role that, although unofficial, was that of ’First Lady of the Song Contest’.

In the last ten years, as the Song Contest has seen more celebrations and acknowledges its place in the history of post-war Europe, Assia’s engagement saw her make two bids to return to the 2012 and 2013 Contests. 2012’s ‘C’était ma vie’ played to her strengths and a return to the chanson style of her successful musical career, while 2013’s ‘All In Your Head’ was far more playful, pairing her up with hip-hop band New Jack.

Assia made her way to many of the recent Contests, conscious both of her role in history and the ability for the Eurovision Song Contest to use music to connect across generations and borders. That was as vital in the post-war years as it is today. It is now, after many years, time for new generations to hold on to that flame and keep alight Assia’s spirit of inclusiveness, inquisitiveness, and fun. 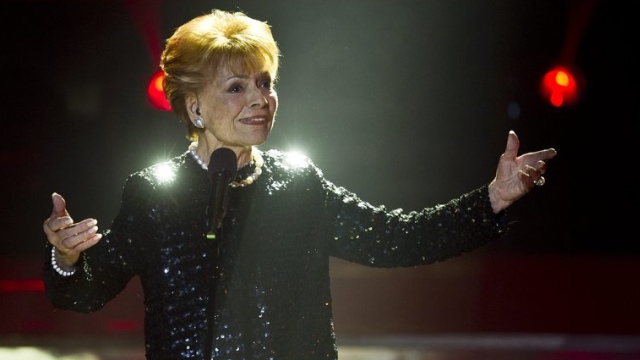 2 responses to “Remembering Lys Assia, The First Lady of Eurovision”