Dancing Naked Apes: Metaphoric Expression as Formula for Eurovision Victory Written by John Egan on May 10, 2017

Gimmick, schtick or metaphor? John Egan looks at how metaphoric expression has, on occasion, been deployed successfully for Eurovision glory.

The 62nd edition of the Eurovision Song Contest in several respects is, a particularly noteworthy one. We are back in Eastern Europe for the first time in five years. Russia is absent for the first time in nearly 20 years. National languages have made something of a comeback, with two non-English songs considered front-runners, several entries reliant on metaphor chasing after the crystal microphone.

What, metaphors—nothing usual about metaphors at the Eurovision, you say? You cannot swing a dead parrot without hitting a dozen metaphors? Perhaps…but not all metaphors are created equal. First, let’s clarify what we mean by metaphors; then we can take a look at some of the more noteworthy winners that have integrated rather sophisticated sorts of metaphor into its entries over the decades.

Lakoff and Turner (1989) took the literary (conceptual) metaphor—using a concept to represent something other than its literal self—and differentiated it for film. They described how filmmakers sometimes build upon such conceptual metaphors to create metaphoric expressions. Let’s unpack a perennial conceptual metaphor as an example: the metaphor of music as a bridge (see below):

All the foot stomps in the world do not a metaphor make (source: YouTube Maxim2291)

Had the 1975 German team built a high concept production around Joy Fleming’s epic Ein Lied kann eine Brücke sein (A Song Can Build A Bridge in English)—if they had festooned the set with a bridge and had Joy: 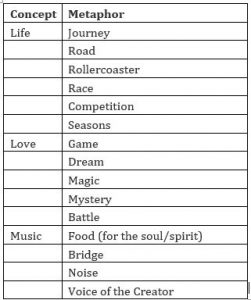 For this article we are extending Lakoff and Turner’s argument about metaphoric expression beyond film to multimedia production more generally, specifically to television and the Eurovision Song Contest. Importantly a gimmick is not a metaphor—though it can constitute part of one.

It’s also important for any production based on metaphoric expression to work on multiple levels. People watching as a form of light entertainment need to appreciate it on that basis: people looking for something more sophisticated—or resonant with cultural capital—need also to see value in it.

Now that we’ve clarified what mean by a metaphoric expression…has anyone actually won the Eurovision using one?

Until the late 1990s, a handful of persons selected each year’s Eurovision champion: how juries have been constituted, how they deliberated, and how they calculated scores (and how those scores were rolled up to actual points) has never been consistent and is always a work in progress. But in the early days of the Contest, year upon year, we saw any number of changes…the result being that, aside from rankings, it was difficult to discern which victories were triumphant or narrow.

In the Contest’s first decade we saw six out of ten winners performed in French. French, like many Romance languages, often uses metaphors. One of these was our first champion to push triumph thanks the metaphoric expression:

Although representing Luxembourg, both artists France Gall and composer Serge Gainsbourg were French. The song rather shreds the archetype of the young, unremarkable female singers who is not a substantive artist—they’re puppets, of wax and sound. Team Luxembourg was rather cunning here: they took an ingénue (already a Eurovision archetype), and gave her a song that scorned the music industry for promoting performers like ingénues based on their appearance rather than their talent.

The 1980s closed with Yugoslavia securing its only Eurovision crown: within three years, a plurality of Yugoslav constituent republics (Slovenia, Croatia, Macedonia and Bosnia and Herzegovina) had declared themselves independent and multiple wars had broken out. Similarly, restive anti-communist political movements across multiple Soviet Union republics gained momentum from the late 1980s onward. By New Year’s Day 1992 the map of Europe had been redrawn with the re-emergence of more than a dozen independent states replacing two larger ones: Yugoslavia and the Soviet Union.

And think about Europe in spring 1990: the continent was rapidly changing—everywhere. Greece, Spain and Portugal all joined the European Community (EC) in the 1980s. Most importantly, the EC was to become the European Union in 1993 and a currency union (the euro) would be launched just before the end of the decade. By the mid 1990s a queue had formed amongst many of the successor states of central and eastern Europe. In hindsight, the winner of the 1990 Eurovision Song Contest perhaps should have been easy to predict.

Taking into account the collapse of communism across the rest of central and eastern Europe–and in particular the reunification of Germany in 1990, the same year as Yugoslavia’s ostensive Eurovision swansong as hosts of the 1990 competition in Zagreb Croatia.

Toto Cutugno was internally selected by RAI to represent Italy in Zagreb. Cutugno had won Sanremo in 1980 and finished runner-up no less than five times over the rest of the decade. ‘Insieme 1992′ (Together 1992) was a paean to the European Community project and to its upcoming transformation into the European Union in 1992. A great artist, a timely subject, and a strong Italian pop song: any one of these elements could easily add up to Eurovision success. All the song’s lyrics were in Italian but for three words: Unite unite Europe.

But Cutugno and RAI took the production subtlety further.  Rather than bring backup singers from Italy they shoulder tapped five members of Slovenian group Pepel in Kri, who had sung Dan ljubezni (Day of Love) for Yugoslavia in 1975. For every key concept in the song—sung in Italian—Cutugno used hand gestures: two hands grasped for together (Insieme), sweeping hand overhead for sky (cielo), hand in half salute for flag (bandiere). And then Cutugno did something that most viewers in France or Italy or Sweden completely missed—he directly invited central and eastern Europe to the party:

The song, the singer, the shared stage with singers from a soon-to-be independent again nation state. By the way, Cutugno was right: Europe (and the EU) was not far away. Nor were a series of transformative changes to the Contest, particularly how a winner was decided upon.

From the 1997 Dublin Contest onwards, the viewing public increasingly played a role in selecting the winner, which fundamentally changed the competitive aspect of the Eurovision. Broadcasters seeking victory would have to consider what might hold appeal across the viewing area rather than jurors, an essentially democratic (and, not coincidentally, profitable) endeavor. In the first decade of televoting, no fewer than five countries scored their first victories: Estonia, Latvia, Turkey, Ukraine and Greece. The 2003 victor is also perhaps the most sophisticated of our metaphoric expression champions.

Sertab Erener was arguably Turkey’s most popular female singer when TRT approach her (and her husband and producer Demir Demirkan) about representing her country in the 2003 Contest. With only one top three Turkish placement across 25 previous entries, Erener’s participation was conditional on complete creative control of an entry sung entirely in English—a controversial decision that caused something of a furore in Turkey.

Erener’s announcement as the artist piqued a fair bit of interest across Europe. But it was the sophisticated preview video for ‘Every Way That I Can’ that caught the attention of many. Situating the song among the cariye (concubines) in the Sultan’s harem of Topkapi Palace seemed to place the song in the Ottoman era. Few expected a stage performance that could replicate the preview video: they were correct. Instead, the stage performance was built upon a metaphoric expression using harem life—particularly the dynamics between cariye seeking the Sultan’s favour in the Palace—as its inspiration:

You make me wanna (Source: YouTube/Eurodictionary)

In the preview video Sertab seems to be offering a postcard from Ottoman era Istanbul. We see Erener as an isolated cariye: on the stage in Riga she is competing with other cariye: her backup singers. The exaggerated gesticulation on key lyrics “hold me closer oh so good you make me feel just like I should” is dripping with disdain: this cariye thinks her circumstance is crap, even if she is willing to play along. The bungee cord bustier symbolizes power dynamics in the harem between cariye. Sertab’s triumphant shedding of the bustier is the metaphoric shedding of passivity. What seems to be a bit of camp choreography is in fact a wresting of the historical narrative of cariye as passive. Erener, as a modern assertive Turkish woman is shedding the legacy of harem, cariye and empire. Literally.

But it’s also a great song, sung by a great artist. From songwriting to studio work to preview video to Eurovision performance, Erener and Demirkan worked multifaceted concept across an entire Eurovision campaign. Indeed many people who voted for ‘Every Way That I Can’ probably liked the tune and were entertained by the singing and dancing. Even better.

With one semi-final behind us we have already seen at least one compelling metaphoric expression. Cyprus’s ‘Gravity’ sees Hovig dancing his way through a range of concepts from science: inertia, friction, movement, action and reaction. But it’s all using these concepts as an extended metaphor of romance (or desire) as physics. But not, interestingly, gravity itself. Team CYBC are doubtless chuffed with having qualified for this year’s Grand Final.

What about Azerbaijan? We have to confess: we assume there is something metaphoric going on in how Dihaj’s ‘Skeletons’ is staged. The classroom, chalkboards, trench coats, ladder, man with horsehead…whatever the metaphor is, it’s very cool. And very much getting a crack at this year’s title.

And then there’s…Italy. Francesco Gabbani’s ‘Occidentali’s Karma’ is a metaphoric expression feast! The graphics and gestures parody the sometimes superficial western aspects of Buddhism. We have Frank as the naked ape who meets a real ape. What ties it all together is the dance: Gabbani, then the background singers, then the ape, then the crowd, then everyone at home gets to join in. Namaste! Allez! The bow between Francesco and the ape is the reintegration of man and man as naked ape. All with a smile!

Will ‘Occidentali’s Karma’ become our fourth metaphoric expression winner? It is certainly well positioned to be—certainly better than ‘Gravity’ or ‘Skeletons’: it’s a better song, he’s a more compelling artist, and Gabbani’s been workshopping his high concepts since the second night of Sanremo 2017. That is an awfully long campaign.

We have had three (out of 61) winners who’ve used metaphoric expressions: a five per cent success rate. The odds are not in Italy’s favour across the years. In addition to high concept, each worked on multiple layers: as a song, a performance, and a metaphor. Not everyone is cognisant of metaphoric expressions when used in the Eurovision, but for those attuned to such nuances, their being done exceedingly well is great appreciated. They make us wanna huh-huh make us wanna huh-huh-huh.