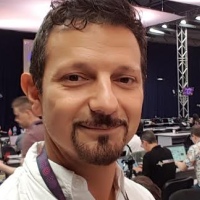 We Are Lost: Where Have All The Eurovision Backing Singers Gone? Written by Nico Pittortou on May 4, 2017 | 6 Comments

Just like David Attenborough brings to our attention the endangered species of the world, ESC Insight wishes to examine the rarest of species on the recent Eurovision Song Contest stage.  Guest writer Nico Pittórtou discusses the diminishing appearance of and consequences to the loss of the backing singers.

Cast your mind back to distant 1995 – a striding Israeli Liora launches into her key change with gusto, she’s so rocket fueled she’s practically about to take off. But just then, she glances back and all her backing singers have mysteriously disappeared. Poof! all gone! She’s alone. Solitary on the stage. She can hear the Amen, but she’s not really feeling it. She’s left with but a wing and a prayer, but nowhere to fly to.

Now, imagine an even more rousing, joyous song. Let’s randomly choose arguably the best song of last year’s Contest from France. Amir is surrounded by exuberant, upbeat backing singers, clapping and jigging away with him.  It’s an inspiring site that adds to the whole feel good factor of the song and elevates both the song and Amir to a new heights.  The douze points come pouring in as France battles for the top spot.

Heartbreakingly, as we know that didn’t actually happen.  And there are plenty more examples where less is actually just less.

There’s been a worrying Eurovision trend of late for the directors to squirrel away those lovely folk with their wonderful voices, which add to and enhance our beloved songs, as if seeing them might shatter the illusion that we are actually watching a sequence of perfect pop videos.

Newsflash: We’re not watching a sequence of pop videos, we’re watching a live show and that’s precisely why we love it, because it is live, with all the vibrancy and engagement that only a live stage show can have. Belgium and Bulgaria got it right last year. France on the other hand may well have snatched defeat from the jaws of victory (or at least the potential of being in contention).

Nobody seems to be discussing why this is happening, but you can be sure if you start up a conversation about it with the casual Eurovision fan, it’s quite likely they’ll go ‘oh yeah, I was thinking that’, though most will not have given it too much in-depth thought.  It just feels like there’s something missing and you’ll [not] see what’s missing again this year.

Two prime examples are the Swiss and Macedonian entries; big backing vocals for big songs, but not so much as a big toe on the stage let along a swooping Israeli sideways strut or a Hemel en Aarde sway.

Where will you find them?  For 2017, the singers are somewhat disingenuously confined in a hidden pit at the back of the stage.

However, kudos to Moldova for making their singers an integral part of their act and it’s all the better for doing so. We haven’t seen Italy yet, but without the cheering orchestra from San Remo, one would hope they’ll get their singers on there to stir the audience into flinging their arms into the air with equally gay abandon.

So EBU, if this is a secret scheme to gradually get rid of live backing vocals altogether, cut it out right now!

Live is one of the many things that makes Eurovision unique. Hiding the backing singers far from improving the visuals, actually detracts from the songs and often misses the opportunity to give the performers a much needed boost.

6 responses to “We Are Lost: Where Have All The Eurovision Backing Singers Gone?”