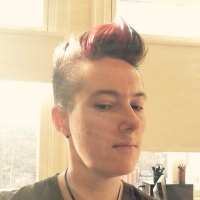 Diversity, Family, And LGBT Rights: Watching Eurovision Across Borders Written by Catherine Baker on May 3, 2017 | 2 Comments

Guest writer and academic Catherine Baker weighs in on the debate of LGBT concerns across Europe and how representations at Eurovision have played out on this in recent history.

The working seminary building, with bishops’ portraits hanging in the corridors and a six-foot crucifix nailed to the back wall of the conference room, that I visited in April to take part in Maynooth University’s conference on ‘The Eurovision Song Contest in a Changing World: Culture, Geography and Politics’ is one of the less likely venues for giving a talk on the Song Contest – especially one about how the Contest got tied into the international politics of LGBT rights – and yet somehow felt very much in the Eurovision spirit.

To understand what might be so ‘Eurovision’ about using a room surrounded by the iconography of a traditionally homophobic, biphobic and transphobic institution to talk about European LGBT activism, Dana International’s impact on trans history, and the symbolic role Conchita Wurst took on in 2014 for people who foresaw a renewed cultural ‘Cold War’ between Europe and Russia involves understanding that Eurovision has always meant, for many of its LGBT fans, a way to rewrite heterosexual community and ritual into something special to them.

To many of the LGBT fans, especially gay men, who have historically been so heavily involved in Eurovision fandom, straight society’s annual rituals of celebration and family reunion have at best assimilated them and at worst been actively oppressive.

The World Cup and the Olympics both assemble fans celebrating national success and (above all at the World Cup) national masculinity; Christmas, the queer theorist Eve Sedgwick wrote, is when all the social institutions where homophobia resides ‘are speaking with one voice’ to remind queer people that the idealised family excludes them. Even before Eurovision became an LGBT celebration on stage, with historic performances in 1997–8 by Páll Oskar and Dana International, Eurovision was already giving thousands of queer people an annual focal point for getting together with community and family.

Or as one ‘out-of-office’ graphic that’s gone around Facebook in Eurovision week over the last few years, asking forgiveness if fans are taking a long time to keep up with email, frames itself in the language of a religious festival: ‘This is because we are celebrating Eurovision.’

A Proxy For Conflict

For someone who researches popular culture, nationalism and conflict since the end of the Cold War, the Eurovision Song Contest represents the one moment in the year when the general public in the UK or Ireland is likely to be interested in something as obscure as controversies over what narrative of national cultural identity should be the basis for Croatian popular music – the subject, more or less, of my first book, which I wouldn’t have written if wanting to find out more about Croatia’s 1990s Eurovision entries hadn’t been the very first step towards what became a PhD project on the politics of popular music in Croatia after its separation from Yugoslavia.

(The controversies over Severina’s Eurovision entry in 2006 – in many ways the ‘We Are Slavic’ of its decade – ended up giving me a case study I hadn’t even expected when I’d started the PhD in 2005. A spin-off paper I wrote on the Ruslana/Željko Joksimović mode of ethnopop at Eurovision, which I’d initially just planned as background for explaining Severina’s ‘Moja štikla’, has consistently been my most cited article since it came out in 2008, just as networks were starting to form around what’s now become an academic subfield of Eurovision research.)

In fact, talking about the politics of Eurovision from a perspective that starts with the cultural politics of the individual countries that participate is an opportunity to show there are more interesting cultural dynamics than just ‘political voting’ behind why East European countries seem to vote for each other at Eurovision all the time – and maybe to get people to rethink how they mentally divide the continent into ‘east’ and ‘west’.

Today, one of the big ‘symbolic boundaries’ in that imaginary east/west division involves LGBT rights and state homophobia/biphobia/transphobia. This was already emerging in the late 1990s, but really entered public ‘common sense’ in the twenty-first century as LGBT movements won important legislative struggles for LGB and sometimes even trans equality – leading to widespread stereotypes in western European countries that ‘Eastern Europe’ is somewhere ‘more homophobic’ than the West. (The same stereotypes are often, just as simplistically, applied to ‘Africa’ or ‘Islam’.)

Traffic-light maps of LGB rights in different European countries, like the ILGA Rainbow Europe Map, tend to come out looking green in the west and red in the east, giving an instant visual impression of which countries are supposedly further ‘ahead’ or ‘behind’. (The Trans Rights Europe Map, interestingly, is rather less spatially coherent.) 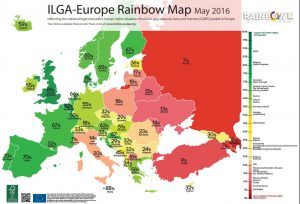 These indexes simplify a lot of legal and social complexities into a yes-or-no checklist of rights, and create an illusion of western European progressiveness and eastern European backwardness that east European queer scholars have taken the lead in pushing back against. Contemporary homophobia, biphobia and transphobia is not just international but transnational, with US pastors inspiring persecution of LGBT people in the Caribbean and Uganda, and French and Polish groups campaigning against LGBT equality exchanging slogans and symbols with each other. Nevertheless, opponents of LGBT equality have been more successful in some countries than others in persuading governments to follow their ideas and rhetoric – notably in Russia, where the federal parliament passed the so-called ‘anti-homopropaganda’ law in June 2013.

Eurovision is cherished by many fans as a site of gay, trans and queer celebration and even citizenship – a rare occasion, Peter Rehberg wrote in 2007 shortly before Marija Šerifović’s heavily queer-coded ‘Molitva’ won that year’s contest, for queer people to be able to feel that the nation being celebrated includes them. At the same time, it’s broadcast across (and beyond) a continent where public broadcasters in different countries will have very different ideological positions, and even be in very different legal positions, towards representing sexual diversity and gender non-conformity on screen.

Vitaly Milonov, prime mover of the ‘anti-homopropaganda’ law in Russia, has also argued for several years that Russian television should not broadcast Eurovision – precisely so that Russian families would not have to watch the ‘Europe-wide gay parade’ and ‘Sodom show’.

What I wanted to talk about at Maynooth was the problem of ‘transnational spectatorship’, or, taken out of academic language, the fact that audiences – and broadcasters – in different countries watch Eurovision from the perspective of some very distinct national cultural politics, and yet the same contest has to satisfy them all.

Something which is the stuff of everyday Saturday-night entertainment in one country, like the kiss between two men when the Swedish comedian Petra Mede officiated a same-gender ‘wedding’ during her interval act in 2013 (marking gay-friendliness as a Swedish national value), or a direct expression of activism in another, like the kiss between two women with which Krista Siegfrids attached her performance of ‘Marry Me’ that same year to the campaign for an equal marriage referendum in Finland, could now be legally questionable under laws like those currently in place in Russia.

Much as Eurovision organisers like to insist that the contest is a non-political event, the social and political struggles in every European country over giving LGB and trans people access to the same rights that their straight and cisgender citizens take for granted show that an event that has become so symbolically associated with LGBT belonging in Europe is not actually outside politics at all.

The language of ‘diversity’ and ‘family’ with which the European Broadcasting Union describes Eurovision is unthreatening and non-specific. During 2016’s ‘flags controversy’, where Eurovision producers’ instructions to security staff at the venue initially stated rainbow (and EU) flags would only be allowed ‘providing they will […] not be used as a tool to intentionally make a political statement during the show’, the EBU eventually said that the rainbow flag ‘technically represents diversity which is a core symbol of the EBU’ (and didn’t give other flags in the Pride family, like the trans flag, the same recognition as the rainbow flag).

This is far from the understanding of the Pride flag as a symbol of political struggle that many activists today would still insist on – but perhaps a necessary fiction, from an organisers’ point of view, to avoid a larger confrontation with broadcasters who might object more strongly to rainbow flags on screen if the EBU itself politicised them.

The language of a ‘family’ show, meanwhile, has resonances to many queer viewers that straight people may not even appreciate – because we know how often describing television as ‘family viewing’ has led to queer lives being erased from what children are able to see. ‘Family’ as a broadcasting standard can alarm queer viewers even while it sounds completely innocuous to most straight and cisgender people – who could disagree with something as everyday and happy as the family is supposed to be?

And yet the ideology of family, in homophobic hands or even hands that are just trying to balance homophobia and demands for LGBT rights in a false equivalence, seeps easily into withholding queer representation from children on the grounds that they should be allowed to grow up ‘naturally’ and that LGBT experiences are in and of themselves an ‘adult’ theme. The false assumption that young people are only led towards ‘alternative’ sexualities because media have exposed them to same-gender affection and transgressions of gender norms is ultimately what lies behind legislation that criminalises promoting ‘non-traditional sexual relations’ to under-18s, the phrasing of the legislation in Russia.

Yet this is not to suggest that conceiving of Eurovision as ‘family entertainment’ necessarily closes down space for it to be a queer celebration, even though the language of family does contain within itself a hinge where that could occur. Eurovision is, and has always been, a show watched by families: so many viewers’ first memories of Eurovision come from watching it as children, on such an out-of-the-ordinary night you were allowed to stay up past your bedtime, hearing languages you’d never heard before.

About The Author: Catherine Baker

Catherine Baker is a lecturer in 20th Century History at University of Hull.