How To Write A Song For The Eurovision Song Contest Written by Ewan Spence on September 1, 2016 | 8 Comments

As September 1st dawns, the new season for the Eurovision Song Contest gets under way and the thoughts of many turn to getting onto that stage in May (wherever it is) and flying the flag for their country. But there’s another group who should be thinking about the 2017 Song Contest. Ewan Spence looks at the options open to songwriters who want to be part of this year’s Contest.

Everybody Needs A Songwriter

In a sense, songwriters have similar constraints to performers who want to sing at the Eurovision Song Contest. There will be a tendency to want to represent the home country, but there will also be a realisation that at the Song Contest, the EBU has no nationality requirements for the material that takes to the stage in May.

If there are any requirements to check passports it will come from the national broadcasters. Some will be incredibly strict and are only looking for nationals to represent the country at Eurovision (Armenia’s ‘Depi Evratesli‘ is only open to Armenians and those of Armenian descent). Other broadcasters operate a mixed policy where one part of the team – be it a performer, a lyricists, or a composer – has to be able to fly the flag (YLE’s ‘UMK‘ asks that at least one writer and the performer are Finnish or resident in Finland).

Others will be quite happy to accept songs from any and every source. Russia’s Sergey Lazarev was backed by a Greek songwriting team, Swedish production houses can be found in many National Finals, and the UK’s last victory came from the voice of the American Katrina Leskanich.

It’s vitally important that you not only investigate all the countries you could submit an entry to, but also to check the rules to see what you need to do to make the broadcaster happy with your entry.

What Are The Odds?

Broadcasters will change the rules each year, but what hasn’t changed over the years is the volume of songs and the chances you have. From all the information that we have, each year around 10,000 songs are submitted to broadcasters. Of those songs, expect around 300 songs to get through to the televised rounds, and from those songs one per country will get the ticket to the Eurovision Song Contest.

Obviously some countries are going to offer a better percentage than others. Melodifestivalen offers less than a 0.6% chance to get through the selection process and onto television, while the 55 entries into Albania’s Fesitvali i Kegnes 2014 were fighting over 28 places – offering a fifty-one percent chance to be seen on-screen.

Unlike performers, as a songwriter you have the opportunity to enter multiple National Finals and it is not unknown for a writer to have more than one song in the Song Contest final in May. The odds for a composer or lyricist are higher, because they can have multiple entries not only in a single National Final, but across multiple Finals – an option not open to performers.

No matter what you might believe from popular culture, there’s no formula to writing a winning Eurovision song for a songwriter to follow. If you’re new to this, you should take some time to listen back to the winning songs since 2009 (when the jury/televote split returned to the Contest) to see the wide variety of styles and presentations that succeed. Go further and take the top three from each year, you’ll realise that all predictable and safe bets are off.

That said, there are some broad strokes you should consider.

At three minutes your Eurovision song will be shorter than the commercial standards of today, but shorter doesn’t mean easier. You need to think about pacing and structure in a different way to a 4 minute 30 second composition. There’s no time to build up interest in a song – at best you get one full play in front of a televised audition process and then taken to television with no extra airplay. It has to be incredibly instant, and not feel saggy at any point during that first listen.

Pay special attention around the two-thirds mark. That’s where you need to avoid retreating back to the same verse/chorus style. Offer some more energy and something distinctive.

But try to avoid the key-change. It might be sought out by a certain subsection of fans, but it’s not a mandatory element of a song in the Contest. When you can move from electronic dance music to country and western, with a dash of chanson and some high-energy pop along the way, the time-honoured twist to add in a touch more energy is frankly cliché.

Finally, don’t rely on visual gimmicks at this stage. Smart staging ideas, props, and dancers can be added to the package later, but they all need a strong foundation. That comes from the songwriter. Make that as strong as possible and your back projection graphics, flute player, oiled drummers and green-flame pyrotechnics will feel natural when the credits roll to close the 2017 Contest. 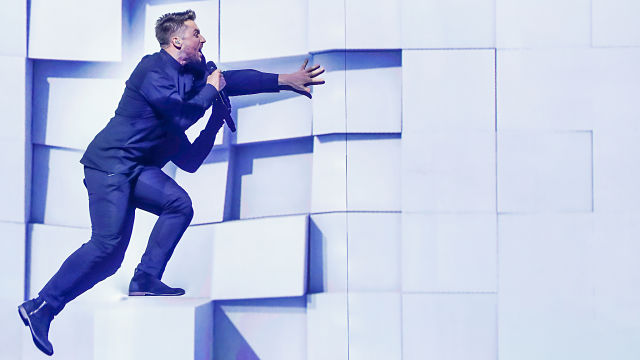 Sergey fell off his 2D platform adventure game on his first run through on the Globen stage (Photo: Andres Putting, EBU)

Once You Start, You Won’t Stop

The Eurovision Song Contest is a huge endeavour but it continues to attract songwriters across the continent every year. It can be addictive, with many names popping up year after year all hoping that this will be the year they make it out of the Nationals to ‘the big one’.

The focus may well be on the performers, but hasn’t that always been the case? The Song Contest offers the modern songwriter the chance of a national stage and a shot at an international hit. As the music industry fractures over multiple platforms, streaming subscriptions, and diminishing cultural returns, the unique offering of the Eurovision Song Contest continues to stand out.