The Songwriter’s Tale: The Pain And Pleasure Of Writing A Eurovision Song Written by davidmindel on October 2, 2015 | 6 Comments

Last year, David Mindel and Adrian Bax White entered the BBC’s process to select a song for the Eurovision Song Contest 2015. As we all now know, that song was ‘Still In Love With You’ and it took to the stage in Vienna to fly the flag for the United Kingdom.

Now that the BBC’s selection process for 2016 has been revealed, David Mindel looks back at his time and offers advice for everyone looking to perform under the Union Flag in Stockholm.

I was approached by a number of colleagues yesterday after the process for finding next year’s song for the Eurovision Song Contest was published and, as I am the most recent perpetrator, some people thought I could throw some light on how it all works. Should I pontificate on what it might take for the United Kingdom to win, we’d be here all day, but these are my recollections. 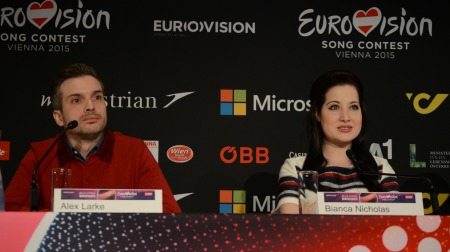 Electro Velvet, supposedly one of them is macho (Photo: Derek Sillerud)

This time last year, Trevor Eyles asked me if the electro-swing track I was recording might be suitable for Bianca Nicholas. It seemed a plan. Shortly thereafter I saw the announcement about the open submission process for the 2015 Song Contest entry (via David Stark’s Songlink) and wondered if the song would work. It was so different that I though it would, but should be a duo and asked the multi-talented Ashley Slater if he wanted to be involved and with his agreement and vocal done, Jon Diamond kindly shot a quick video in the studio and entered it for us.

For those of you who wonder whether, if you enter without a publisher, label or BASCA (the British Association of Songwriters, Composers, and Authors) behind you, you stand no chance, fear not because, for the first time ever, I entered without such backing into the first stage. I have to say that, had we had not been shortlisted I would have probably retired there and then!

On November 21st, Helen Ridell, the Eurovison producer, e-mailed to say that we had indeed been short-listed. In January I had a conference call with Helen and Guy Freeman who asked about the duo, their experience and whether I’d be willing to make some amendments to the production. I presume that, in the period since November, the entries from record companies and known artistes had been considered. These songs took the total to about four hundred and there was now a new shortlist. Shortly thereafter, Ashley, who’d had a horrible experience with Simon Cowell on The X-Factor decided he didn’t want to go through something like that again, asked to pull out and, with the BBC’s agreement, Alex Larke stepped in.

The track was now with Adrian Bax White so he made most of the changes, all of which enhanced the production – Helen and Guy’s suggestions were spot on every time and improved everything. It would have made sense for the BBC to go with a record company entry as there would be guaranteed support, but, eventually, after Helen had met the duo a few times, we got the nod, dependent on no unforeseen problems coming to light. We were getting quite excited.

There were about six very difficult weeks when we knew, but had to stay schtum. Not even the singers’ parents could know until March 7th when the song was to be announced. Alex and Bianca were going to rehearsals and briefings and I think everyone got very suspicious. Two weeks before the ‘Red Button Reveal’, Adrian and I went to London to the video shoot. Creative Director Dan Shipton and choreographer Jay Revell had done an amazing job and we were blown away. I’ve never seen to many cast and crew for a video shoot. What was, and is obvious to me, is that the BBC team really wants to win and did everything possible to make it happen. The wonderful Chris McClusky gave the ‘kids’ media training and warned them not to look at reviews and YouTube comments or obnoxious tweets and to put aside anything they saw.

The Internet Is Rather Unforgiving

No one can really be prepared for the wave of venom and negativity that spewed out on the announcement of the choice for the UK’s entry so you’d better have a pretty thick skin before you decide to enter and your poor artists need hides like a rhinoceros. I’ve seen a tweet one national newspaper critic posted minutes before he wrote his article and critique of the song. He’d actually made up his mind before hearing it. At one point we had more ‘dislikes’ than ‘likes’ on YouTube. Some messages were sick, vile and unprintable.

Because of the ambiguous, restrictive and non-negotiable Universal Records’ contract the entrants are obliged to sign before the song is accepted, many record companies will not get involved and I truly hope this contract is re-negotiated or entirely thrown out. Really our only option was to put the song out ourselves, which we did through Righttrack. This involved promotion that was done brilliantly by my old friend, Ron McCreight. He achieved a ton of radio play. If the same course is taken this year, apart from the recording costs, you may find yourself shelling out to make the song available to the public and to get airplay. We had live Radio 2 and TV sessions for which the BBC has no budget for musicians (really!!!)…they have to be paid by the ‘record company’ as ‘promotion’.

Alex, Bianca and Helen travelled to various countries promoting the entry to Eurovision fans and opened the 60th anniversary Concert. Adrian and I were pretty much out of the loop as far as the performance of the song was concerned until we arrived in Vienna. The horrendous tweets continued so we, and especially the Beeb guys, tried to keep everything positive and deal with Universal’s cock-ups.

Vienna was something I would not have missed for the world. We first saw the Electro Velvet performance at the second rehearsal where we made a couple of suggestions about improving the sound and that was pretty much our involvement. There was a really fun reception and the British Embassy and a nice performance (in the rain) at the Euro village and Adrian and I loved meeting real fans whose positive attitude really made it so worthwhile. Some of those fans are now friends and Vienna is a glorious city.

If your entry makes it to the Eurovision Song Contest in Stockholm, you should be aware that it will become obvious that the song takes third place behind the artist and the performance, whereas the songwriters come somewhere between the make-up artist and the people serving coffee in importance. This is not a gripe; it’s a fact. Any Eurovision journalist will confirm this. Be prepared. Eurovision rules say that songwriters are part of the act and, as we had four wonderful singer/dancers, there were only places for Helen, Adrian and me in the Green Room with them. Dan and Jay should have been there. Chris should have been there, but there’s a limit.

Of course sitting there was the absolute highlight and something I’ll never forget. Having a song represent the UK is something of which Adrian and I are immensely proud and now the reaction to the song has miraculously improved. 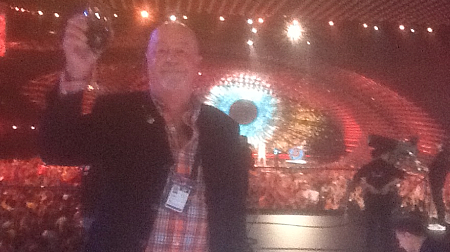 I have only the regret that our lovely Bianca had to endure some vile, terrible remarks that have left a scar. Alex is probably too dumb to notice (…just kidding, Alex!). I have huge respect for Alex who was the consummate pro and kept everyone smiling when things were tough.

A Final Piece Of Advice

If you’re going to enter, I wouldn’t send an Electro-Swing song this year, obviously! People are talking ballads, but there are always about seventy percent ballads in the final. Something completely different will certainly stand out. Whatever is chosen will displease seventy percent of the people whatever it is and expect enthusiasm only from Eurovision fans. The BBC guys will pull out all the stops to help the song win… although Terry Wogan, bless him, has a lot to answer for.

There you have it, but bear in mind that there may be thousands of songs now the national press has carried the story. We had a one-in-four-hundred chance of getting through, it could be less this year. I doubt that I’ll recoup what the exercise cost me. You probably won’t win the Final so you won’t get rich and perhaps not even if you win (but Charlie Mason may be able to tell you about that).

The BBC paid for flights, hotel rooms and per diems that nearly covered my bar bill. The artist will be out of pocket as there is a very low fee paid to them. Universal will take eleven percent of your download royalties. You will need to explain why you wrote the worst Eurovision entry ever! Your faith in humanity will take an almighty dive… and the sensitive will be permanently scarred.

So is it worth it? You bet!

6 responses to “The Songwriter’s Tale: The Pain And Pleasure Of Writing A Eurovision Song”