The Passion Of The Fans And The Emotions Of The Contest Written by Ellie Chalkley on May 10, 2016 | 3 Comments

Fans are the lifeblood of any collaborative and the Eurovision Song Contest is no exception. The high engagement levels offered by the access to the Contest increases that connection, build emotions, and it’s hard to stay quiet when something isn’t perfect. Ellie Chalkley explores the passionate fans of the Contest in 2016.

It’s Ellie here. I got your letter from Eurovision today. You know which one, the one where you wondered why our corner of the press room wasn’t getting behind the UK team as much as we ought.

Well, it got me thinking. I recognised a lot of myself in the people you were complaining about – and I think it’s only right that I try to explain to you how I think about the UK at Eurovision, because it’s a complicated matter that weighs deeply on my heart.

There’s a few things I’ll talk about. The nature of modern media fandom. Where I think UK Eurovision fandom fits into other BBC fandoms. The specific travails of being an ‘out’ British Eurovision fan, and Jon, because you’ve not listened to me go on about it enough, the inspiration and visual themes that I would have chosen to support our song.

So. Modern media fandom. For people in fandom, it’s about analysis, and being engaged, about the end of passive enjoyment of an unquestioned product. It’s also about constructing your identity by joining multiple media tribes. The modern fan has the means to make comment across a whole spectrum of media and if they want to say something they’ll say it. Modern fandom cares about how our entertainment was made, about the stories behind the stories and we about what it means. We want to be able to put our hands up and comment if we feel that art that is supposed to represent us falls short, whether it’s for stylistic, ideological or quality reasons. When we see that almost-there moment at the end of Joe & Jake’s performance, we’re groaning because we want it to be perfect and we’ve got an idea what would be perfect. We’re fans, and part of the dark side of fandom is that we love something and we look at it closely and we pick it apart until we squeeze accidentally it to death.

And then there’s our complicated relationship with the BBC. The BBC is an organisation that I’ll defend against all kinds of criticism. It’s not too bonkers to say that it’s the world’s flagship broadcaster. It’s one of the best things about being British. I love the BBC and cling to it as an imperfect bastion of ‘trying to do the right thing’ in this awful world. I’m a fan, and when I say fan I mean a modern media fandom fan, of two of the BBC’s biggest shows, Strictly Come Dancing and Doctor Who. Being a British Eurovision fan sits comfortably alongside Strictly and Who fandom, and I think that there are big crossover points between these TV schedule behemoths that are worth examining.

In Strictly-land we care about a developing story over the course of three months. We admire and pick apart the artistry, and we care deeply about the results and the reaction to the results. Everyone also cares about how also their particular favourite performs. They don’t pick their particular favourite because they’re in the same demographic category (although that can help) but because they identify with their story, because they find a particular contestant or their dance partner terribly sexy, or just because they like the artistic choices made by a pairing.

Doctor Who fandom never stops moaning. It cares about the show as an ongoing 50 plus year story as well as on a season-by-season basis. Who fans care about what the show means in context, what it means as a TV drama and whether the un-initiated kids out there are enjoying it. Who fans are so invested in the show as being the best of all possible science fiction shows that when it fails to meet their very exact imaginations they get disproportionately upset. Many Coulombs of electrons have been spilt in internet discussions about how the BBC’s flagship sci-fi family drama series could somehow be more stirring and perfect. We pick at it precisely because we care. We spent all of last season arguing about exactly how long or how bouffant Peter Capaldi’s magnificent hair should be, because we decided the hair was a creative choice indicating the Doctor’s state of mind. We argued this over months, with straight faces all round. People tell Who fans not to overthink it, that it’s just a kids show really, and that we ought to stop devoting so much brain to it.

Being in British Eurovision fandom is about halfway between the Strictly fan experience and the Who fan experience. Song Contest fandom cares about how the whole show works on those magical nights in May, how the UK contribution in particular works and also every member has their own personal musical tastes to contend with, which don’t necessarily align with that UK contribution. We get more intense about our views, because we pack the really public part of our fandom involvement into the two weeks of the Contest, where the longer runs of Strictly and Who tend to foster very slightly less intense debate.

Well, maybe they’ve got a point for one out of the three. It certainly isn’t purely about the song anymore. It’s not a radio program, it’s not testing songs double blind against one another to find the objectively best song. There is a visual element to the contest which you can ignore if you choose, but you are leaving marks on the table if you do, because everybody else is taking that option.

It’s also not political in the way that people think. I daresay that the UK as a concept and a force projecting power is currently doing less active harm across Europe than one of this year’s strong favourites. If Russia can basically walk it this year, I don’t think that the UK can keep going back to ‘politics’ as the reason for underperforming at Eurovision. If there is any ‘politics’ in play, I think it might be due to the UK’s view of Europe, rather than the other way round.

The shallow nonsense angle on the Contest is the really horrifying one, because the call is coming from inside the house.

I am not comfortable with besmirching the reputation of a beloved and recently passed figure, but I cannot dance around the thirty odd years of dismissive, insular, consistently sexist and increasingly out of touch commentary that Terry Wogan gave on Eurovision for the BBC. He did not like the modern contest, this much we know. I’ve been studying his commentaries and he checked out basically after 1999. If the BBC wants to look for a reason that so many  A&R professionals in their 30s and 40s don’t think much of Eurovision as a musical competition, they could maybe think about the way that those A&R people were introduced to the contest as a joke, a novelty, not a place for cool people or pushing boundaries.

From the non-UK Eurofans you hear: British music is so good. We love it and we love you guys. Why does it look like you guys don’t try any more? What’s gone wrong? We try to explain why the perception exists that the UK don’t take the contest very seriously and we end up rehashing the same old points over and over again. I don’t know.

And maybe we as fans and Brits feel defensive because we’ve internalised this message from our friends at home and abroad.

Maybe we’re trying to protect ourselves from being hurt again. I remember a sunny day in 2014, walking home and listening to Guy Freeman telling me that ‘this was it, this was our year’ and then impulsively popping into Aldi on the way home to make sure we had enough bubbly for my party guests to celebrate our impending Eurovision win. Later that night I bitterly thought ‘never again will I get caught up in the hysteria’. I remember what it felt like in 1997 when we’d just got rid of the Tories, then we won Eurovision and Blur were good and Oasis were great and the Spice Girls were exciting and they were all draped in the Union Flag. Eventually I had to give up chasing that particular high.

Now on to what we do about charming, doomed Joe and Jake and their perfectly lovely song. You wanted to address the apparent lack of patriotism around the press centre, but you failed to mention that we’d been in there all day swapping a wide range of opinions on all the songs.

We try not to tread on each others toes, I think, and everyone on the team has their own favourites, but we praised as well as criticised and always on artistic grounds. We worried about the Azeri gold catsuit making poor Samra look unfortunately nude, we complained about Barei not being quite a skilled enough slapstick comedian and we had to come to terms with all sorts of problems with Poli Genova’s outfit. But when we’ve seen something truly wonderful, there’s been awed gasps (Franchesca), fulsome applause (Greta Salome finally hitting her marks) and real tears (Jamala, Hovi Star). We are not monsters, we can be moved. 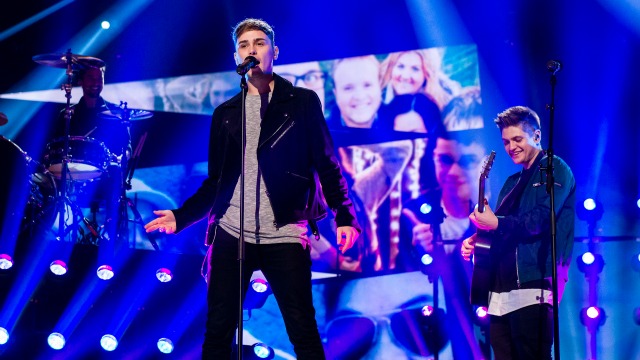 Joe and Jake have selfies, pyro effects – and a serious uphill struggle to break into the top ten on the scoreboard.
Photo: Eurovision.tv

It seems like such a small detail to us, to have our boys make contact with each other and not flinch back, to have Jake swap his microphone into his left hand and then return the hug that Joe is trying so hard to give him. It’s 90 percent there. We can see what they’re trying to do and we’re willing them on to do it.  The whole song is leading up to some sort of breakthrough moment of mutual affection and we are absolutely aching for it to be just right. A moment of emotional catharsis and completion is the thing that gives the viewers the shivers and turns them into voters. I made you a Pinterest board (see, I’m that type of fan) of British pop acts hugging, acting matey and sharing microphones from the Beatles to the Libertines to One Direction that would have been my starting point.

I don’t know what to tell you Jon. We’re fans. We know the British music industry and the BBC are capable of amazing things and somehow it’s not coming out on the screen or getting the votes. We want it as much as you do.