This is Stockholm: Our Schedule Highlights Written by Alison Wren on May 3, 2016

With the fans, press and delegations starting to arrive in Stockholm it’s time for them to decide how to make the most of each and every day. In this final edition of This is Stockholm, Alison Wren and Ben Robertson will be giving their top tips for where to be and when. We hope to see you there!

The Euro Club and Fan Cafe next to the Royal Palace (Photo: Stockholm City)

Firstly, the events are split into three types. Rehearsals and the shows themselves are looked after by the EBU, and their rehearsal schedule details the timings. Don’t forget if you have OGAE accreditation, you can get into Euro Fan Café from 11am to watch a live feed to the rehearsals until Sunday – popping in during the day is very much encouraged.

Stockholm City is running the Eurovision Village, and the administration of the Euro Fan Café/Euroclub complex. You can find detailed breakdowns of the fun at Eurovision Village, with events throughout the day at the small stage, and performances/shows in the evenings from 6th May onwards. The Euro Fan Café/Euroclub schedule runs from Monday 2nd May with events throughout the day.

Finally, plenty of other locations are hosting one-off nights and full programmes over the Eurovision period for those without accreditation. Check out last week’s guide for more information.

Here we look to highlight our choice of activities for the day, and give you an idea of what is happening around the city, and in the EuroClub complex.

If your Swedish is up to it, the Swedish preview show Inför Eurovision shows at 20:00 tonight on SVT 1, with Christer Björkman and Melodifestivalen stars (including Wiktoria who is on the Swedish jury) will be giving their views on the songs from the first half of semi-final 2.

If you want to hang out at Euro Fan Cafe, pop in from 11:00 to watch the rehearsals in comfort. The forecast promises more glorious sunshine, so we suggest a cheeky drink on the balcony overlooking Gamla Stan. Melodifestivalen veteran Mattias Holmgren is the DJ for the evening from 21:00. 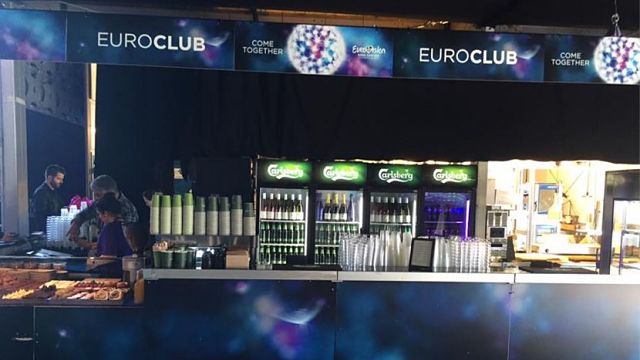 Enjoy a drink in the well-stocked Euroclub bar. Prices are marginally cheaper than average for Central Stockholm. Photo: Stockholm City

The EuroClub hosts, Velvet and Shirley, will be doing a meet and greet with some of the fans in Fan Cafe at 17:00. Between 18:30–19:15 Wiwibloggs will be taking to the stage at Euro Fan Café to discuss their views on rehearsals so far. There may or may not be a test of the karaoke system in the evening…

Today is Ascension Day, which is a National Holiday in Sweden. Expect to see more people around the Fan Cafe during the daytime, and kids enjoying the sunny weather.

The first meet and greet events with the participating artists will start today at Euro Fan Café, so if you have a burning urge to get to know Gabriela, Minus One, Rykka and Greta Salome – now’s your chance. Gabriela starts off at 14:00, with Greta on stage at 19:00. ESCDaily are running their review show from the stage that evening as well, before Swedish DJs and Melfest experts Schlagerprofilerna round off the night.

Eurovision Village opens for business today, and we suggest you check it out. The sponsors are offering competitions to win tickets to the Grand Final, as well as freebies such a free eye tests, vegetable juice, and the chance to win a Baltic cruise. ABBA The Museum will have a stall as well, giving you a chance to get the ABBA experience for free.  With the Thursday being a National Holiday, Friday is also given off for people. The headline act today is Martin Stenmarck, from Eurovision 2004, at 20:00

Euro Fan Café and EuroClub come alive today. With this being the first of two epic rehearsal days, expect this place to get full in the evening. France and Spain have their first rehearsals open after the dinner break, France starting just after 19:00.

He’s followed by Kevin Lee, Eurovision reporter and Stockholm based stand-up comedian. Following that is a set from Ylva & Linda – the Swedish twins whose national final songs have popped up all over Europe – and know how to write a good old schlager.

While all this is happening, the Nordic delegations (plus Estonia) are going to mingle upstairs in the little bar, before appearing in EuroClub to perform at the opening night.

Fans of Hera Bjork might want to check out her show at The Playhouse Theatre tonight, discounts for OGAE members. Rehearsals start off with Germany, Italy and the UK, the latter take to the stage at 11:10 (yes, after Fan Cafe opens, so Germany and Italy will be missed by the masses as they haven’t worked out the beauty of a record button).

Eurovision Village has performances from Freddie, Highway and Minus One, followed by a tribute to Ted Gärdestad from Eurovision 1979 and one of Sweden’s most beloved songwriters.

At night Helena Paparizou is the big headline draw, and no doubt she’ll team up again with her former backing singers….Shirley Clamp and Velvet.

The early risers among you may want to check out the first ever Eurovision flag ceremony, with competing countries’ flags being raised outside Euroclub at 07:45. I don’t know why either. You then have quite a while to wait before rehearsals of the Big 5 again, starting 12:30.

From 19:00 it’s all about the Red Carpet at Euroclub, with all accredited fans and press getting special access. The actual show is at City Hall but there will not be any public access there.

Before that however, ESC Insight’s Ewan Spence is hosting a panel show where four guests hopefully will be attending; Nicoline Refsing (Creative Director Eurovision 2014), Jonas Gladnikoff (three time Irish composer), Gabriel Alares (twice Russian composer and this year for Norway and Moldova) and Karen Fricker (Eurovision academic) have said yay yay yay to attending. Pop into Euro Fan Café at 17:30 to listen to the talk show before we watch the artists do their thing.

At night the Official Opening Ceremony After Party heads back to EuroClub. There’s a ‘real’ DJ in the EuroClub to entertain delegations, so big pressure on the Eurovision DJ’s in Fan Cafe. It’ll be rammed in there…as it should be. The party runs in EuroClub until 05:00.

The EBU is running a half day conference exploring the relationship between Eurovision and the changing Europe. It’s free at attend and runs from 10:00 to 12:45 at The Stockholm School of Economics. You can pre-register on the EBU’s website.

Our own Ben Robertson is going to have to sneak out of this early though to run one of the Fan Cafe quizzes – themed as the ‘pub quiz’ because it is more informal than the others (not that you have to start drinking so early). Current start time is 12:00, but might be a little later.

The early start is because Fan Cafe will become rammed when Frans enters at 14:00 for Meet and Greets. He will be followed by Sanja and Eneda Tarifa. Delegations do come first. This day is officially themed as Melodifestivalen, to celebrate it for a day before moving on. Melodifestivalklubben are awarding composer and artist awards to previous winners at 18:30 (no, I don’t think ABBA will be there). In EuroClub Linda Bengtzing and Magnus Carlsson will perform, with legendary Swedish remix god Soundfactory spinning in Euro Fan Cafe. Somewhere among all this the EuroClub will be hosting the traditional Israeli party with food by the wheelbarrow load. 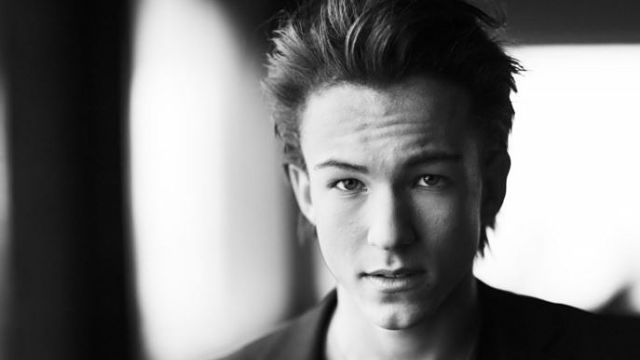 Come and meet Frans at Euro Fan Cafe, expect to fight your way through a crowd of Swedish teenage girls. Photo SVT

At Eurovision Village you will find from today schoolchildren on Kungsträdgården’s little stage with a whole variety of different performances. Come and see Ben Robertson’s most talented students sing at Eurovision Village at midday with the winners of his school’s Melodifestivalen competitions. Two of the four songs even have a Eurovision connection.

If you have accreditation, you can head on down to EuroClub for a warm-up party prior to Semi-final 1. Pre-book for a Eurovision DJ, tasty buffet and a glass of wine or beer for 180 SEK. In this pricey town that counts as a massive bargain! If you don’t have tickets for the show, you can watch it on the big screen in Eurovision Village or in EuroClub, and then you can turn up for the official start of Karaoke in the small upstairs bar of EuroClub. Fan Cafe is also trialling a new idea on this night – the ballad DJ. Snooze and de-brief post show to some Balkan mastery.

Wake up refreshed because it will be team-on-team action in Fan Cafe with the Team Quiz – which OGAE squad has the biggest brains? Starts at 13:00, just after the ESC Daily team have hosted on the Fan Cafe stage.

OGAE will be taking over EuroClub for their annual party, from 21:00 – 05:00 and artists on stage at midnight. With guest acts from Eurovision Song Contests gone by, headlined by Sanna Nielsen it looks like a fun-filled night, and a DJ theme of National Finals for us all to nerd over. A-maz-ing.

If you’re not an OGAE member, why not head over to Hard Rock Café where Wiwibloggs are hosting their WiwiJam night from 18:00, with loads of guest artists including Sergey and Amir. It’s free entry, but you’ll be very wise pre-book a free ticket as it’s certain to be popular. Hard Rock is no almost 5000-capacity EuroClub.

The third option is going to be the Eurovision Village, with Stockholm Pride converting their annual schlager night into an open-air classic. Katrina (from the Waves) and Helena Paparizou headline a list of Eurovision and Melodifestivalen names.

As on Tuesday, you can warm-up for the semi-final in EuroClub with OGAE, and watch the show on the big screen. If these warm-ups, which start at 15:00, are your thing, then why don’t you buy a ticket for all three for just 500 SEK.

Some of the OGAE Party special guests will be around either at the party on this afternoon or just before in the Fan Cafe itself.

The big one is here with the Eurovision Song Contest Master Quiz, individual vs. individual on their smart phones, with a knockout round on buzzers for the winners. It’ll be a little like this as we understand.

If you’re a fan of the Swedish producer Max Martin, there is a celebration of his work on the big stage in Eurovision Village from 20:00 – 22:30. Magnus Carlsson is somehow involved here too.

If all these performances are inspiring you to take the microphone, it’s the final karaoke night at EuroClub from 23:00 – 03:00. With all your favourite Eurovision songs available for Ben to absolutely murder, you’ll be glad there is an eventual end.

For the Grand Final we will be watching the show, and the crowds, in Eurovision Village. We’ve been promised the joys of a magician on stage to warm us up. Once again you can warm-up for the show with food and drink with the OGAE pre-party at EuroClub.

Tickets for the Grand Final…simply don’t exist any more. Tele2 does have some though for Eurovision The Party, an early evening start for a big concert with Sanna Nielsen, Panetoz and Oscar Zia among others.

After the show you can join one of the official afterparties in Tele2, Operaterassen, and of course EuroClub.