As the Eurovision Song Contest say goodbye to each other both in Rotterdam and in the Online Press Centre, the plans for next year’s Italian hosting will have started between the EBU and RAI following Maneskin’s victory. Ewan Spence takes ESC Insight’s customary look to the future and what we might expect from Eurovision 2022.

Let’s face it, Rome 1991 is a bit of a legendary Contest. Not only was it the scene of Carola’s Swedish victory thanks to a tie-breaker rule against France’s Amina, it was also the scene of some haphazard hosting leading to one of the longest Contests up until that point; 3 hours and 14 minutes.

Last year allowed the community to revisit the Contest thanks to the Eurovision Again team, and yes, the perception of chaos around the Contest was well-deserved. Yet it has been embraced whole-heartedly with a new-found respect, a lot of memes, and the love

Where In Italy Are We Going?

Some years there are very few choices to both the host city and venue – after Salvador Sobral’s victory not only was Lisbon the clear choice, but so was the Altice Arena complex. While other cities put in bids, there was just one entry that filled the brief.

Other years you can have multiple valid options not just for a city but also the venue in the city. 2022 is going to be one of those years. You can probably discount Rome given a potential class with the Tennis. Look for strong bids from Turin, Milan, and possibly Naples. I’d expect to see Bologna put in a bid as well, but this will be more to keep Bologna visible as a tourist destination because it may struggle to meet the brief in some areas.

If I had to call it now?

When Should I Book Time Off?

It’s a tough one to call. The traditional ‘mid-May’ for the Song Contest suggests May 14th or May 21st as the obvious dates, My gut feeling is that the 21st is more likely because it gives Italian broadcaster RAI the full year to get ready. Could it slip as late as May 28th? Unlikely but not impossible.

If you want to go ahead and start planning now, make sure you get fully refundable flights and accommodation… and make sure your work can be flexible for a date change if you book time off.

It’s worth pointing out that back in 1970, when the Dutch broadcaster was facing a shortfall in entries, it came up with the idea of doing short videos between the songs to bump up the running time… and these postcards have been with us ever since.

Rotterdam 2021 had the unique pressure of dealing with the coronavirus pandemic, and while the live shows were essentially ‘the Eurovision Song Contests as we know them;, there were countless accommodations that are not obvious to the viewers, and contingency plans that were never seen. Not only is the Song Contest the three broadcasts, it’s also an opportunity for the EBU members to share knowledge with everyone else… and there’s a lot to learn from Rotterdam.

I’m curious to see what obvious elements RAI will retain… moving the Green Room to be in front of the stage and the camaraderie that was on show from the artists was a lovely touch this year. If this continues we may never see ‘that hammer’ blocking the camera angles again!

One of the major impacts of COVID-19 this year was the reduced size of the on-site Press contingent. Cut down from 1500 to 500, an Online Press Centre was available for everyone else. Offering a basic social network to talk to delegations and other members of the press, rehearsal footage, press conferences, and breakout sessions with the performers, the Online Centre was both welcome and useful.

Even if the coronavirus restrictions are lifted next year, I would hope this online option remains. And I can’t think of a practical reason to have an arbitrary limit of 1000 press members. 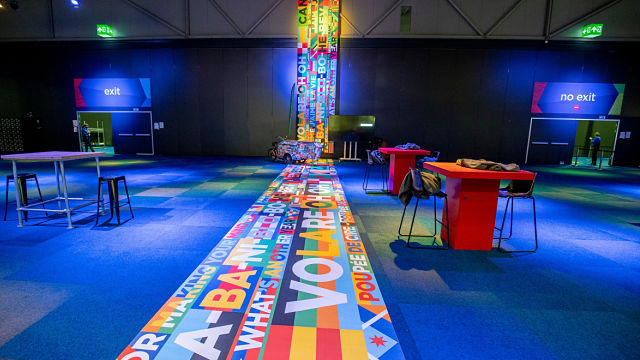 We Need A Kinder Contest

Unfortunately, the uglier side of the Eurovision Song Contest was on show both in the chat stream of the Online Press Centre, and in the wider online communities across the internet. Certainly the former should absolutely know better; the language on show would never be tolerated in person, and it should never be tolerated online either.

One bad apple can spoil the barrel, and there are many bad apples on show. How can we ask the wider community to be more tolerant if those reporting on the Contest are seen to be bullying and passing derogatory remarks like confetti?

Next year, I hope that we have a more welcoming community and we remember that #CelebrateDiversity is an all-encompassing message.

Let’s Think About That Interval Show

One area where Sanremo excels is in the celebration of the heritage of Italian music, and in the future stars that one day will take over that mantle. The last few Eurovision Song Contests have touched on former acts and songs, although the list is starting to become rather predictable – when Måns Zelmerlow can say that he’ll find a way in every year, direct to the camera, it might be time for a change.

Yes, Italy is going to look to some of its former Eurovision stars, but the deft touch of balancing a wider legacy and the upcoming stars, along with the potential for a magical interval act is something that I am eager to see.

Or we get Zlatan.

Even though the city of Sanremo has indicated it will bid for the Eurovision Song Contest in 2022, the 2000 capacity of the Ariston Theatre is far too small for the stadium spectacular that the Song Contest has become since it was lined up to host the aforementioned 1991 show (before it was moved to Rome for security reasons).

That’s not to say Sanremo’s influence will not be on show. The small size of the Ariston means that the Italian crews are much more focused on close-in shots that focus on intimacy rather than the Michael Bay sweeps we’re used to seeing. I want to see that ethos in the Song Contest. RAI can bring a different visual language to the Contest, getting in close to the artists, feeling and seeing the emotion, and creating a much better connection between the audience and our performers.

Even More Authenticity And Emotion

One more the juries and the public have voted for songs where the artists are authentic. Whether that’s rebellious rock, cathartic chanson, powerful poetry, or terrific turbo-folk, the performers who are honest to themselves and have the confidence to be themselves on stage have been rewarded.

The drive behind Salvador Sobral’s “fireworks and feelings” motif is there for all to see over the last few years. The 2021 Contest had it in spades. Delegations that think “oooh, rock won, let’s have a look down the local pub to see who’s on the bill” will be taking the wrong message away. If you want to follow the winning song with a similar song, then you need to think not about the genre, but the emotion.

Because what is music, what is art, if not to share emotions?

What are you looking forward to for the Eurovision Song Contest in 2022? What needs changed, what should stay the same, and what would be your wildest expectation? Let us know in the comments.