In bringing Russian Woman to the Eurovision stage, Manizha Sangin continues her practice of layering her music and performances with symbols that help bring the message home. Ellie Chalkley spoke to Manizha over video chat about the thought and meaning behind all the elements of the powerful Eurovision stage performance.

Ellie: I wanted to talk to you about symbolism and meaning in your stage performance because there are so many levels to it!

Manizha: I am afraid of people misunderstanding – I think that if I’m singing in Russian maybe people will not understand my message, which would be bad for me. But now people can understand my symbols!

Fabrics Close to the Heart

E: You’ve brought all of Russia on stage with you in the fabrics of your dress

M: In the fabric of my beautiful dress! We made a call to action to all the women in Russia to ask them, “Come on girls, we need pieces of your traditional dresses!” Russia is so multi cultural and I wanted to show it. All the colours, the textures, the beautiful ornaments. It was my mother’s idea to show it. When we won the national selection I had a lot of xenophobic comments. I wanted to show people that they should stop saying that, that we are a multicultural country.

E: You’ve worked with the idea of multiple Russian ethnicities and identities before in your song ‘Nedoslavyanka’. But I think that something that people in the West and people outside Russia don’t really understand is the complication of being from Central Asia within Russia.

M: Yes, it’s true – people often don’t understand this. For me it’s such an honour to be able to show myself like this on that big stage. I was always an example of how to become successful if you were a refugee. My family were refugees because of a cruel war in Tajikistan and Russia was our second homeland. And now I feel myself to be a Russian woman, which is why I’m singing that!

E: It’s really powerful for you to fully claim that identity. The other thing about the traditional fabrics is that textile art is traditionally seen as women’s work and looked down on as a form of art.

M: Yeah, of course. It’s a form of art because they were all made by women’s own hands. One girl sent in a piece and said it was made by her grandma, so it’s very very old fabric. I wear it close to my heart, you can see it.

E: And that is precious, to have all those generations of women there with you. 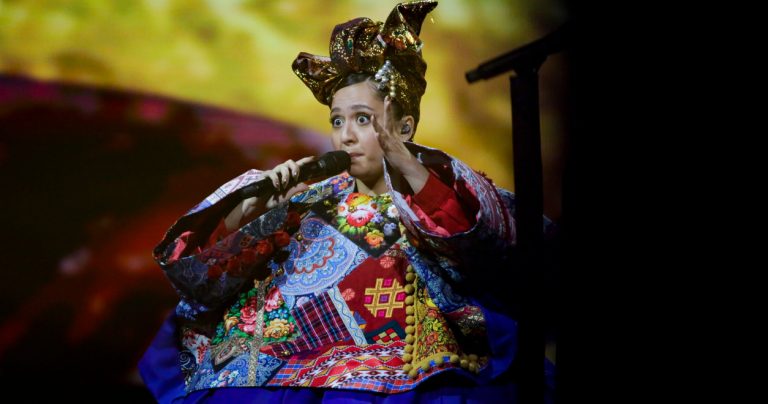 E: In the background, you have some art that explains what is going on in the lyrics. How did you put that art together?

M: We have three artists in the backdrop – they are all Russian women! The main artist is Natalia Goncharova – we call her our Frida. She was an avant garde artist and she was discriminated against by people in Russia, the church didn’t accept her and they said that her art was destroying the culture. That’s why she moved to Paris with her husband (he was also an artist) and they made lots of ballet and opera designs, huge, very beautiful designs. She was also one of the first Russian women to wear pants and she didn’t wear makeup – she was iconic! It’s sad that not only in our country but in the world that she isn’t so well known. She died many years ago but I want to show people that I respect Natalia Goncharova and get the world to know her better. 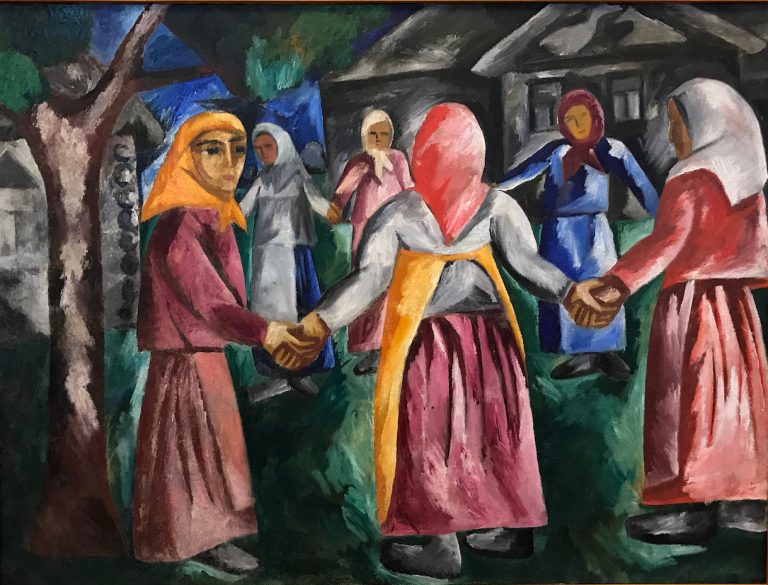 The second artist is Aleksandra Exter – she was famous in Europe and was also an avant garde artist, and she had a short career but she was very popular in Europe. Not so many people remember her but I want to say ‘Hey you should remember her!’ 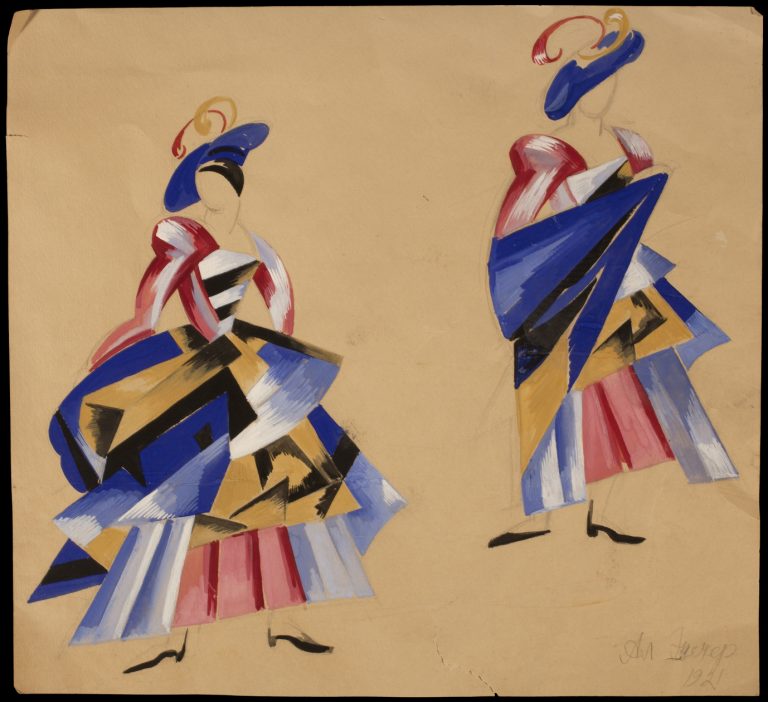 By M.T. Abraham Center – Provided by copyright owner of both photograph and artwork, Public Domain

The third is Natalia Klimova – she’s a modern, living artist. She made the beautiful piece of art when I’m singing with my choir. It’s a woman who is wearing a kokoshnik, a traditional hair accessory, and the horses with the soldiers are fighting. She made it a few months ago and I saw it on instagram. I went ‘Oh my god, this painting is totally about my song!’ so we messaged her and she said ‘Yes, I’m giving you my art and show it to all of Europe’. 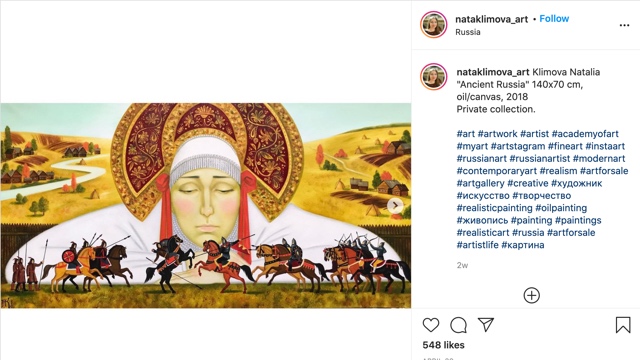 E: Who is represented in your video choir and how were they recruited?

M: So once again, we made a call to action and we said “Hey Russian Women, we want to show you on the screens”. After the National Final everyone started asking me ‘why should you represent Russian women? You don’t look like a Russian woman’ and I said ‘How do you know what a Russian woman looks like?’.

I decided to show people the all the different types of Russian women all on one screen. It is a collage of the soul of Russian women. We’re all so different, but we are all together in one country, helping each other. You can see very powerful women – who were activists in Chechnya, in Grozny. Women who are open with their sexuality and who are LGBT activists. One of the women runs the largest foundation to help children with cancer. These women are my inspiration.  When I am singing that part of my song with these women behind my back, I always want to cry because I don’t remember having this kind of moment in my country. We are all together, singing, smiling and happy.

We said to them, you can record yourself however you want. Makeup? Fine. No makeup? That’s fine. If you want to wear something, wear it. We want to show real Russian women without photoshop. It’s really cool that we have all the generations – we have grandmothers, we have little girls, we have grown women, we have mums with kids on that screen. Hundreds of women on stage with me!

E: And it’s all people who answered the call and said ‘I am a Russian woman’

M: Yes, and they support the message.

E: You were working with Balkan Beat Box on this song. There are traditional music references as well as the beats!

M: When I was in Tel Aviv, I had some gigs. I decided to stay for a while because I love Israeli pop music. It’s multicultural and multi-genre. I love a girl group called A-WA – I was inspired by them when I was writing Nedoslavyanka. I love Balkan Beat Box and we met each other. My friend’s boyfriend’s friend is the guy from Balkan Beat Box! These guys made lots of interesting songs that we love – they said that they wanted to work with me because they liked Nedoslavyanka and I just went ‘Oh come on guys! I was inspired by you when I was writing that!’.

I love when artists are not afraid to sing in their traditional language, when they use traditional instruments. My favourite singer is Yasmin Hamdan – you need to know her! She’s an amazing singer from Beirut in Lebanon and she’s a very powerful woman.

E: Also I thought that there is a lot of irony in your song – when the traditional choir sings ‘Fighting fighting but no-one is praying’ there’s a lot of irony and humour in that. How important is humour and irony to your presentation?

M: I think we need to smile a lot to go through the horrible things in our lives. Of course I can sing about the patriarchy in my country and I can cry about it, but I don’t want to do this because I believe we deserve good feelings. If you want to be a normal person, you need the ironic feelings inside you. The ironic feelings mean that you are stronger. For me, when I was writing these lyrics I was laughing so hard. I need to let it go and make it into a ‘hahaha’ thing to let it go.

E: Because the patriarchy is absurd, that’s why we need to be ironic.

M: We cannot take it seriously – we will die if we if take it too seriously.

E: You also have some references to traditional Russian poetry in your lyrics?

M: Yes – when you’re reading Russian literature there is a very traditional view of women. So we have in literature a lot of things about how women should act. If you want to be with someone you need to sit down and wait for them, if you want something you have to sit and wait for it. And you cannot move. The huge dress is like a monument to the way that tradition says you cannot move, you cannot get what you want. That’s why in the first part of the song I sing like a small girl who needs help, who doesn’t know what to do. She’s saying ‘I think I can’t do anything by myself’ but after 5-10 years she understands she can do it by herself when she stands up and goes.

E: A princess that rescues herself. Plus there’s the symbolism of your worker’s clothing…

M: Oh yes, everyone here at Eurovision is so sexy. On the stage it’s about sex, about short dresses. I wanted to show the women who are working class heroes, who are working every day and wearing this outfit and still feeling sexy. In fact, I feel sexy when I’m wearing the red outfit.

E: You have a lot of power and that is hot!

M: You can be sexy however, not just in the short dress. Your energy is sexy! 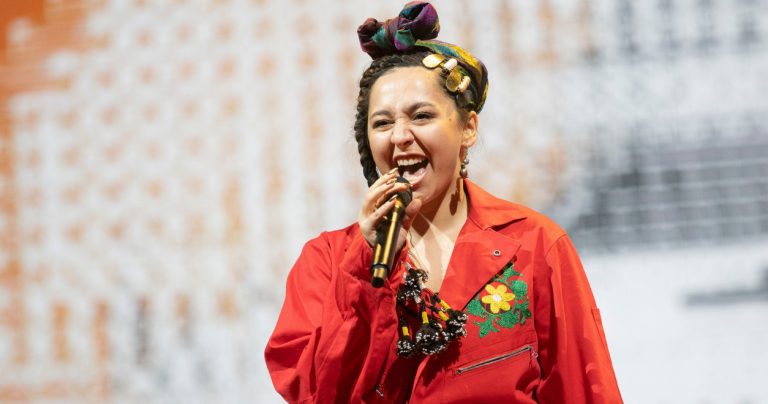 With so much consideration behind how every element of her performance supports the message of her song, Manizha might have one of the most powerful stage shows of the 2021 contest. From the massed video choir to the traditional Taijk Chakan embroidery on her red jumpsuit, every detail is full of the power and diversity of Russian women.

One response to “Manizha: All Of Russia On One Stage”