Living Like Cicciolina Written by Ellie Chalkley on March 6, 2020

Finland’s re-invigorated UMK competition has served up an interesting selection of radio-friendly songs that will be at home both in the charts and on stage, but the song causing the biggest buzz is Erika Vikman’s kitsch, sex-positive hymn to Cicciolina. 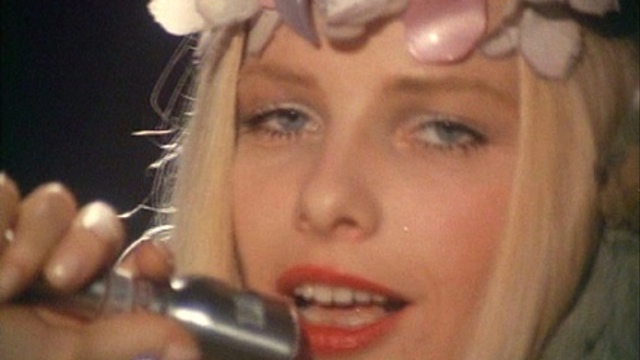 A scene from the film ‘Cicciolina Amore Mio’

During this time, she frequently appeared on Italian TV where she would ‘surprise’ stuffy talk show hosts with unplanned nudity and outrageous statements. Italian TV, especially during the era where Silvio Berlusconi was the owner of many channels, has been particularly notable for the use of the objectified female body as a decorative element during programs of many genres.

One notable program doing this was ‘Striscia la Notizia‘ (Strip The News) which contained male anchormen reading news items handed to them by scantily clad competition winners known as velinas – a reference to a press release and a word that also alludes to releases made by the Italian fascist government to control the press. Stefania Benini explores the concept of Cicciolina as a velina for Italian politics in her 2012 piece ‘Televised Bodies: Berlusconi and the body of Italian women‘:

Staller embraced the exploitation of her beauty as a political banner. The operation of velinismo was not as openly provocative as Staller’s candidacy but the objectification of a woman via her subjectification and political reduction through an ambigious position of empowerment is similar.

In a TV landscape where the female body was routinely exploited by the producers, Staller exploited this appetite for semi-sanctioned naughtiness and turned it into a multimedia career. Was this a feminist action? In her election campaign, Staller changed the slogan of Italian feminists “Io Sono Mio” (I am mine) to “Io saro nostra” (I will be yours). Does this suggest that Staller was aware of her position as someone who was difficult for the feminist movement of the time to wholly accept? And as the song suggests, if Staller had been a man and lived as she lived, would she indeed have been an envied playboy? 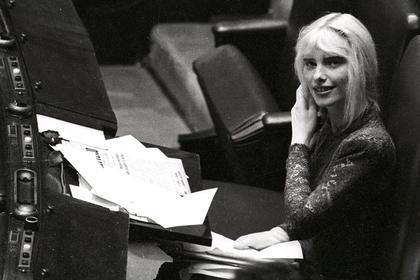 Ilona Staller in the Italian Parliament.

Staller also produced music as Cicciolina, largely lightweight dance music with sexual themes. You might enjoy her performance of ‘I Was Made For Dancing’, which is in the spirit of cabaret and drag. It’s almost Eurovision. She continues performing her music to this day, and in what may have been a shrewd business move, contacted Erika Vikman almost immediately after the UMK song was released to see if they could maybe do business together.

In 1991 Staller married artist and serial plagiarist Jeff Koons. They collaborated on a series of NSFW artworks that merged their individual aesthetics into a celebration of carnal banality – Made In Heaven [Seriously, this is very NSFW, you have been warned].

However, the relationship was to end in acrimony in 1993 as Koons expected Staller to stop working in pornography (except in their own artworks, apparently). The legal wranglings over their divorce, and the battle for custody of their son, resulted in Koons destroying a significant amount of the work they produced together. The court case featured the unedifying spectacle of Koons claiming that Staller was an unfit mother because she worked in pornography – a point Staller succinctly rebutted by saying “Koons knew I was a porno star before we had a child”. Koons was also later sued for non-payment of €1.5 million in child support. He holds the record for the highest price fetched for a work by a living artist at $91 million dollars.

In 2011, Staller reached the age of 60 and became entitled to the Italian parliamentarian’s pension. The Five Star populist party objected to her receiving her allowance and placed her on a blacklist, suggesting that as her parliamentary work had included sex-related themes she was somehow unworthy. She is currently receiving the pension at a reduced rate and has recently re-entered politics.

The song ‘Cicciolina‘ is Erika’s tribute to a woman who has combined tenacity with shameless sexuality throughout her life. Erika Vikman says:

“Cicciolina has been many times in Finland, she is really famous also in Finland. I saw a documentary about her and her life . I fell in love with her attitude immediately. For me she is a symbol of courage, independence and unashamed sexuality. That is what we can learn from her. You can enjoy femininity and be feminist at the same time. My message is: Stop calling people whores! Stop shaming your sexuality!”

A song with a strongly sex positive message isn’t really something that the Eurovision Song Contest has seen before, even though we’ve had our fair share of sexy artists and sexy songs. Perhaps the emphasis on keeping the Contest family friendly has discouraged artists from coupling their personal appeal to a message about ending shame and embracing the universality of pleasure? Even songs which are definitely about sexual pleasure get described in coy terms, like Iveta Mukuchyan insisting that ‘Lovewave‘ was about her desire for world peace.

Musically, ‘Cicciolina‘ has a rare quality of being retro, but not dated. Picking the elements apart, it’s possible to hear 1970s ABBA in the melancholic, almost ecclesiastical chord sequences; 1980s Italopop in the melody; 1990s Melfest schlager in the brash brass synth line; 2000s Max Martin in the immensity of the production, and 2010s pop beats underpinning it all. Being entirely in Finnish might be a barrier for the specifics of the message to come through in the song, but it’s certainly not been a barrier to non-Finnish speakers enjoying the melody and aesthetic.

Erika Vikman competes with ‘Cicciolina’ in UMK on March 7th, and while her song has seen the most chart success and excitement from Eurovision fans, it is far from a certainty that it will be representing Finland at Eurovision. Whatever happens, we’ll always have Cicciolina.