Melodifestivalen has been doing the six week tour of Sweden for nearly twenty years. The format is well established and rarely changes. The stage is dismantled and transported as soon as each show reaches conclusion. It then takes a couple of days to put that stage together in the new arena ready for artists to take part.

In the days in-between SVT drop the first hints as to what is coming up on stage. Song lyrics are released. Information on backing singers and how many dancers comes out from the woodwork. Eventually a ’Bidragsbibeln’ (’Song Bible’) is published that even gives us details about what special effects are being used and what mood each artist to trying to create.

But not a peep of the actual song.

Keeping The Songs A Secret

The songs in Melodifestivalen are incredibly protected. No song is allowed to be released until after it has been performed on the Melodifestivalen stage – with those qualifying directly to the final needing to go back into hiding until all the semi finals have been completed. That’s in contrast to most other national finals across Europe where releasing the competing songs and giving them chance to become popular on radio, is part of their show’s advertising strategy.

In 2015, Molly Sandén’s ’Universe’ was unintentionally leaked weeks before she was to take part. In that case in the spirit of fairness SVT released all of the songs in that heat for a few days. However the following year Anna Book was disqualified because her song ’Himmel för två’ was previously released in Moldova and auditioned in their national selection. The song had zero if not negative commercial benefit, so would not have been disqualified under EBU rules, but SVT decided such action was deliberate (even though the songwriters claimed they were not aware Moldovan TV published all the long-listed songs) and removed the song from competing despite the show being just a two days away.

Either way, both cases show how strictly Melodifestivalen keeps control of the new music in their show.

This brings us to the Wednesday. By Wednesday of Melodifestivalen week all the SVT staff and artists have arrived in their new location. Dry rehearsals take place in a local sports hall and social media channels do Q&A’s. It’s a calm start – all knowing that the press circus begins fully on Thursday when artists get to go on the stage for real.

The press start filtering into town by the early evening… although only the diehard ones. I count just over a dozen people assembled for the first press event of the week in Linköping, maybe 20 or so in Gothenburg, compared to nearly 100 there on the Thursday meet and greet sessions. Community blogs such as Schlagerprofilerna are regulars alongside three members of Melodifestivalklubben (OGAE Sweden). The community press sit slongside two journalists from Aftonbladet, Sweden’s most read tabloid that runs their own Schlagerblog and a few others. This really is the hardcore collective of Melodifestivalen journalists, and usually the same faces week in and week out.

Six o’clock is start time. In the first week we have assembled into a conference room in the artist hotel in Linköping. The same set up happened in Gothenburg. This is particularly useful because with artists and press and SVT staff mingling around and making it a good time to say hello to each other.

As this is Sweden we are all politely sat at our desks a few minutes before six. We are joined in the room by Cecila Felix Caballero, the Head of Press for this year’s Melodifestivalen. She greets us at exactly one minute past six. Before we started in Linköping for heat one she asked us our opinion if all the paper printout were really necessary. 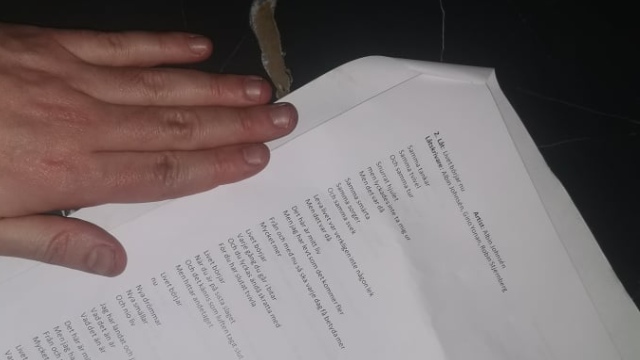 To be fair, it’s a lot of paper. In total fifteen pieces of paper for just the lyrics and press contacts for seven songs. One week later in Gothenburg the solution was that not enough copies were printed for everybody attending, so we had to ask if we wanted one. Some paper was saved.

Formalities over with, now it is game time. The format is that we get to hear seven of the competing Melodifestivalen songs from first in the running order to last. It’s exactly twentyone minutes of intense listening, the songs are played back-to-back without a breath or an introduction between them, sometimes the next one starts literally as the last note plays on the one before. While that’s happening the press are blogging and tweeting their thoughts with fans the other side hanging on their every word. It’s a blessing to the honesty of media at Melodifestivalen that no leak has come this way.

The Rollercoaster Of Each Melfest Week

Meeting in a hotel conference room has benefits and disadvantages. Yes we are all tucked out of the way and it is quiet. Nobody is walking past to disturb us, and there’s plenty of space and desks to lap out notebooks and laptops. One doesn’t have these luxuries in the hustle and bustle of the arena.

However the biggest downside is the sound quality which is of a conference room quality. Fine for presentation videos but lacking the juice to pump out the latest pop hits with any justice. I realise I sound like a Premier League football manager at this point, complaining about the pitch quality when travelling to a cup game against non-league opposition. After all, the speakers aren’t any better or worse quality for anybody else. It just feels so anticlimatic that the first playing of these songs is so subdued.

I almost wonder if it is semi-intentional. Some songs work better in a quiet conference room, some work better with blasted out across an entire arena, and some only come to life in front of a live audience. This creates a wave of narrative and winners and losers throughout the buildup to Saturday’s show – and an artificial way of creating story and hype.

Once the final song has finished we go through exactly the same thing all over again. The same seven songs at the same intensity. When it’s all over I feel an emotion I haven’t felt since I was a teenager at school taking exams. Did I call it right? Did others get the same answers as myself? Have I just heard ‘the one’ not jut for Melodifestivalen but potentially for Eurovision itself?

The press then break off into different parts of the hotel. Some do reaction videos, some compare notes trying to work out which song sounds like which other song and so on. What’s strange is that this is the artist hotel, so while I sit with Melodifestivalklubben comparing notes about Robin Bengtsson’s song, he’s sitting on the table opposite doing an interview with some local children. The bubble is an intense place.

What’s crazy is the real life implications of what we did in the press room. Twitter exploded with glee and dissapointment in equal measure. Betting odds were getting slashed all over the place. The immediacy of it gives it a unique feel, and I’ve never felt the power of a journalist’s pen to be so strong before.

It is a small understated part of the Melodifestivalen merry-go-round and probably one of my most fascinating Eurovision traditions in existence across all of Europe.