Ben Robertson speaks to Méndez as he prepares to take part in his fourth Melodifestivalen participation, asking about his time in Chile, travelling the globe and the love from the Swedish people.

Usually most stars try and blend into the background to be unnoticed when they travel, but it was impossible to miss Méndez.

I wasn’t even on the look out for stars. I’m standing at platform 10 at Stockholm central station and have just planted one foot onboard the X2000, the high speed train connecting the Swedish capital with Sweden’s 2nd city, Gothenburg. While clambering on board walking past goes a figure in the brightest crimson red tracksuit I’ve ever seen. No, he wasn’t a member of Pollapönk, the facial tattoos gave that away. Tis was Méndez – en route to his fourth Melodifestivalen experience. A quick sms to his manager and twenty minutes later we’re in the bistro cart. 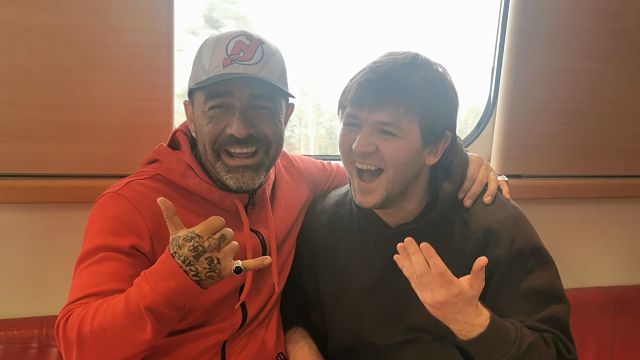 Together with ESC Insight’s Ben Robertson

Méndez is tired and unshaven but still incredibly jolly. He’s only just back into Sweden after spending ten days in his home country of Chile. It is sumer in the southern hemisphere meaning there are concerts galore. After the Melodifestivalen heat he’s planning on travelling down there again for more gigs. It’s a long way. To get back to Stockholm Méndez has had to connect through both São Paulo and Frankfurt in a journey totalling 36 hours.

The tilting of the train didn’t help cope with the jet lag and the feeling rough.

The only thing more epic than Méndez’s fame on opposite sides of the planet is the journey to get to where he is today. Méndez was born in the port city of Valparaiso, and tells me how as a child his family couldn’t afford the bus fare to travel 100 kilometres to the capital Santiago.

His family was one of many Chilean families who fled the country during the ruling of General Augusto Pinochet between 1973 and 1990. Dad fled the country first, fearing arrest for his left-leaning political beliefs, and after settling in Sweden he sent plane tickets home for the rest of the family. Méndez’s family was not alone in escaping to Sweden. In total 45,000 people with Chilean heritage reside in Sweden make it the third largest Chilean community outside of the South American country.

Méndez’s family ended up living in Farsta from the age of 11. Farsta was designed as a perfect little suburb to Stockholm in the so called ’million programme’ with the aim to build a million new homes in Sweden within ten years. While a hugely successful project from a building perspective, Farsta amongst other areas had social problems – many new immigrants to the capital settled there and it was easy to fall into the wrong culture. For Méndez robbery and car crime became his teenage kicks, drugs and alcohol his vices, and the dreams of becoming a surgeon faded away. 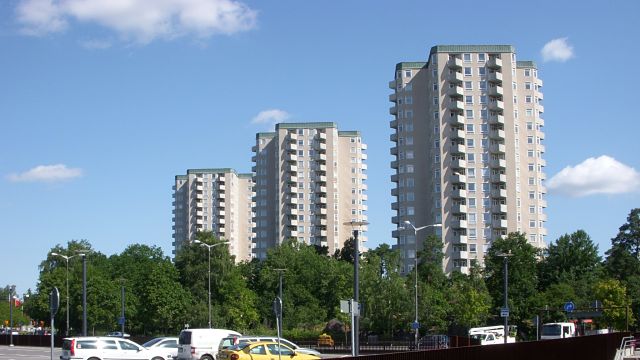 Apartment blocks in the Stockholm suburb of Farsta

However at age 16 he discovered the local music studio, and found a new mission in life.

Méndez got his big break on the back of the wave of popularity in Latin flavoured music around the turn of the century. Ricky Martin and Marc Anthony were at their peak, and Sweden was looking for one of their own.

Méndez’s had commerical success before appearing in Melodifestivalen, but this competition did provide him with his biggest hit. 2002 was the first year Melodifestivalen stretched itself to the six show maraton it is today and diversity was key. No more could the show be sustainable with only pure doses of traditional Swedish pop music.

’Adrenaline’ was a risk for Méndez, he claims ’lots of people were afraid to take part’ because of Melodifestivalen’s old fashioned reputation. However it was the right song at the right time in the right place, qualifying directly from Melodifestivalen’s first ever heat and eventually finishing in 2nd place.

If you know anything about Swedish culture, you’ll realise that sets you up for a career for life.

However Sweden was only a small part of what has been a global career taking Méndez to Europe, Asia and South America.  As the waves of Latin music faded around the globe, so too did some of the opportunities in its non-native habitats. For most of the last decade Méndez has been based in Chile, escaping the harsh depression of the Swedish winter.

Life back in Chile has been anything from the quiet life. There’s been success no the music scene including singing the official song for Chile’s hosting of Copa America in 2015. Not afraid of the public eye, Méndez’s family even featured on their own reality TV show, Los Méndez and he even stood to be mayor of his home town Valparaiso, finishing in third place.

At the current time of writing Chile is in the middle of a political crisis, with protests now a regular occurance each weekend. What began as a protest against increased subway costs has now escalated into a spiral of many issues and inequalities, such as the cost of healthcare.  The COP 25 summit was moved last year to Madrid and the football teams have stopped playing. I ask Méndez to explain the current situation.

”Chile, my country, has many bad things happening. Over there people are not buying it any more from the politicians. I have been there myself, and I was part of it, trying to be part of the change. We’re not buying it. This is the only country in the world where we sold our own water, this is reality.

It’s crazy how people exploded, went on the streets and burnt it down. I’m not supporting violence or anything of course not, but the police brutality after that – hitting kids, rape and that sort of thing. Our country hasn’t seen this since 1973 with Pinochet, a dictator, and we are supposed to be a democracy and these things still happen. It’s bad, and I was there two days ago. My people are sad, and I’m trying to bring some joy, some happiness, we got to be together.

It’s the same for me if I want to dance on a stage we got to do it together. I’m trying to bring out a message there about how I’m thinking about you, working, and trying to do something for my country.”

Méndez was drawn last in Melodifestivalen’s third semi final that year, but still expected to that the Swedish public would throw him out in the first round. However nostalgia alongside a catchy pop hook eventually took him all the way to the final. At one point Méndez was looking like he was in for a rough night in Friends Arena, placing last with the international juries on only two points. However he emerged at the end of the show with a top three placing from the Swedish audience and was still as popular amongst the Swedish folk as ever before.

”When I go back to two years ago. That was amazing. It was a bigger production than ever, Friends Arena, so many times bigger and more people and a lot more kids and pop music involved in this. Now everybody wants to be a part of it. Before, a lot of people were afraid to take part because this was for older people before. Now little kids watch it and love it.

”Truly from my heart. Thank you to the Swedish people. They have always been receiving me with a big hug. I had been gone ten years. I thought they had forgotten me. If I got that support you can’t beat me.”

Indeed so much work came on the back of Melodifestivalen 2018, including Let’s Dance and performing in musicals, that Méndez has returned to Sweden with some of his six children. A particularly tear-jerking part of his journey that Melodifestivalen year was in the postcards before the song played. Méndez explained how moving to Sweden was also in part motivated by his son Leo, who has come out as homosexual and has more freedom to live in Sweden. Instead of dense apartment blocks in Farsta, Méndez now lives in an idyllic part of Sollentuna, north of Stockholm, with the calm streets filled with villa houses and woods full of bilberry bushes.

The song this year, ’Vamos Amigos’ landed on Méndez’s feet through the work of Jimmy Jansson and Jakke Erixson, who have previously collaborated in Melodifestivalen with ‘Hall Om Mig Hårt‘. The story goes that they were working on songs together and thinking of Méndez. They had the melodies, and then Méndez got to add his rap to it.

They’ve got one of the most experienced names in the Swedish music business to help out on those melodies.

Alvaro Estrella is a common name to many Melodifestivalen fans. In 2014 his song ’Bedroom’ was the number one pick of SVT’s selection jury but despite this didn’t make it through the first heat. However he’s been  heavily involved in Melodifestivalen and Eurovision both before and after this appearance. You may recognise him performing behind both Eric Saade and Sergey Lazarev on the Eurovision stage, amongst other examples.

Despite both living close to each other and having Chilean roots, Méndez and Alvaro didn’t come together until recently. However they make up a perfectly contrasting yet complementing duo, and Mendez is full of praise for his collaborator.

”He’s been around and working his ass off. Then I started to learn about his music and his work – it’s great to give the opportunity to put it in the song and see how it works – we needed his voice and it was the perfect match.

I am just in love with his voice and he can dance so well.

I am full of energy man, you can ask my mother, I will be dancing until I die. And with this guy you have to be on the top of your game. The world should know this guy becuase he is truly talented.

He is a 100% human being, such a good guy. He really works hard and he is going to be a father in a couple of months. His lady is on stage with us (Vicky Perez) and dancing in the show. Yes we will have an extra person on stage inside of her!”

The song is somewhat what you would expect from these seasoned pros. It’s a contemporary floor filler and despite being drawn fourth in Saturday’s show this is the one that will bring the party. The team are trying for a little West Side Story themed emotion on stage.

Melodifestivalen has given Méndez such a platform for success. Once again, whatever the result, it seems that it’s going to springboard more work and joy for this performer who always seems to be smiling.