This week Ben Robertson is with Melodifestivalen as it visits The Scandinavium, the host arena for the Eurovision Song Contest in 1985. Gothenburg would like to host the Song Contest again, but here he explains why there are many challenges in the way of such ambition.

Gothenburg, Sweden’s second city, is one with a proud history of hosting major events. One of my earliest TV memories was watching Jonathan Edwards break the triple jump world record at the European Athletics Championships here. Local music idol Håkan Hellström attracted over 70,000 people on two consecutive days in the summer of 2016. In addition, Gothenburg was also the host city of the 1985 Eurovision Song Contest.

The arena for that Song Contest, The Scandinavium, was one of the biggest in that era to host Eurovision, a show which was in the process of transitioning from a theatre show to an arena one. Build in 1971, Scandinavium was a great venue, highlighted not just by its 14,000 capacity but also by its iconic shape, a curved paraboloid roof that was striking for Swedish architecture in the 70’s.

In its post Eurovision era the venue has continued to hold big concerts and sports events such as Whitney Houston, Iron Maiden, and world championships in ice hockey, figure skating and floorball. However it’s now got far more competition in Sweden for the biggest shows. Malmö Arena, opened in 2008, has a similar capacity at 15,500 but of course has all the trappings of modern design and also connectivity, with the arena directly on a train between both Malmö city centre and Copenhagen.

In the capital city of Stockholm Scandinavium has had to compete with Globen, the world’s largest hemispherical building and host venue of Eurovision 2000 and 2016. But it’s not alone and in the last decade have both the Tele 2 Arena and Friends Arena opened, two new football stadiums both possessing a retractable roof. Stockholm is now hoovering up the opportunities to host largest concerts such as Elton John and One Direction.

Gothenburg has a football stadium, Ullevi, but without a roof it is only a practical option in the short Swedish summer, and Gothenburg’s west coast location means it suffers more rainfall than Malmö and Stockholm.

In conclusion, Gothenburg is struggling to compete. 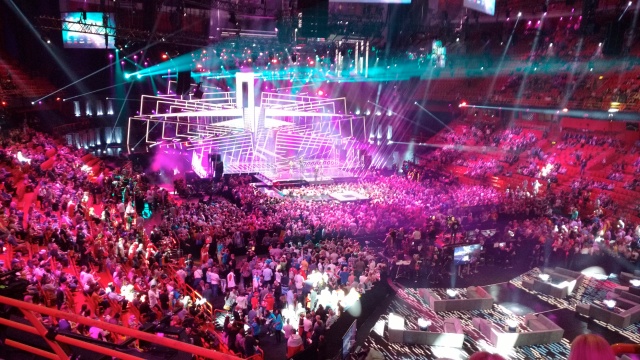 Why The Gothenburg Bid Failed

Sweden has hosted Eurovision twice in the last decade, and Gothenburg was keen to host both the 2013 and 2016 editions. Malmö won the bidding for the 2013 Contest. Gothenburg didn’t even submit a bid that year, noting that other events such as the Gothenburg Horse Show booked during the weeks beforehand.

When Måns brought Eurovision back home to Sweden it was by rights Gothenburg’s turn. After all the city had hosted Eurovision just once, and Stockholm and Malmö had now hosted twice. And this time a bid was submitted.

However Scandinavium was rejected by Martin Österdahl, the Executive Producer for both 2013 and 2016 Eurovision Song Contests. There were a few reasons behind this. The first was once again other events in the schedule. Scandinavium is the arena for local ice hockey team Frölunda Indians. It so happened that in 2016 the local team did successfully go through the playoffs to win the Swedish Ice Hockey championships. Those extra games meant they had a home fixture as late as April 21st that year – likely too tight for setting up a Eurovision arena the following month.

The further issues lie with the arena itself. Scandinavium’s design isn’t as accessible on the inside as other venues – for example large trucks must park up outside rather than being able to drive in and be unloaded inside. It is workable, but this either increases set up time or the man power needed to make the required preparations..

The biggest issue is that paraboloid roof however. The roof of this arena is saddle shaped and sags in the middle. To support the roof, there has suspension supports that travel from either corner underneath the roof line. This reduces the height between the floor and the lightning rig set up, meaning making Eurovision a spectacular TV show is more problematic here. 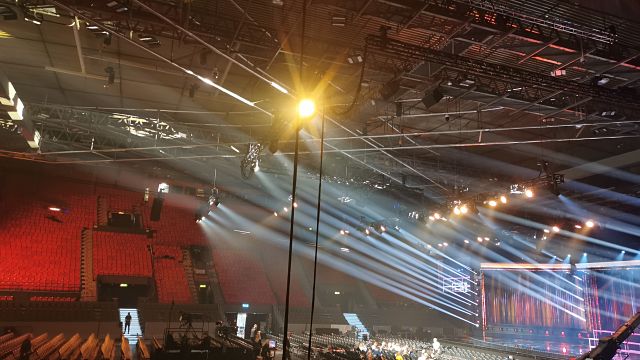 I spoke to the CEO of GotEvent, Lotta Nibell, before rehearsals began for this week’s Melodifestivalen. GotEvent is the company ran by Gothenburg Council overseeing all their arenas in the city, from the football stadium to smaller sports halls.

I asked Lotta about what issues Scandinavium has in hosting events.

”We have the limits of the venue it’s only 13.5 metres of height we can use. We can take up to 70 tonnes of weight on our roof. There is support strength already but it depends on how you hang things.

I think about 8 out of 10 acts downscale these days when they come here because there are more and more things hanging due to stage design and lighting. But usually that’s not a problem.

I don’t feel that we lose any acts because of it. Saying that we don’t see Ariana Grande, Justin Bieber and those huge productions I think they more or less would go to the capital and the bigger market.”

And Lotta is right in that Scandinavium is still plodding along fine, last year there were a grand total of 113 different events hosted in the venue. However the team running the arena know that they aren’t able to match the facilities at other competing venues. When Lotta travelled to Stockholm in 2015, to pitch for a chance to host Eurovision the following year, her technical team had worked out a solution to take up to 100 tonnes of weight by adding extra ground support. However the main problem was space and volume, and there’s just not enough space to hang up all of the equipment.

Failing To Agree On A Solution

Gothenburg Council is well aware of this. In 2017 a study was undertaken to look at options to renovate the area around Scandinavium. By May 2018 the local council had come to the decision to replace many of Gothenburg’s arenas, including Scandinavium. The city council admits that their current arena offering just doesn’t live up to the requirements for hosting major modern events. 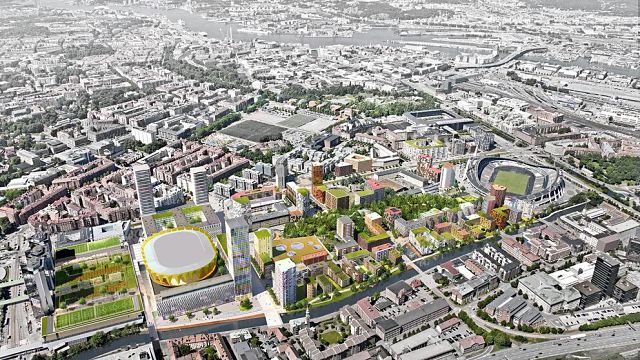 In theory a plan should have been agreed by this week, but a decision has now been postponed to the end of February. Since the plan came in Gothenburg’s local politics has been shaken by the emergence of local upstart political party  Demokraterna, taking 17 % of the vote and ensuring none of the traditional political blocks could get any  majority. It took cross-block agreement to come to a solution, but in recent weeks the Social Democrats pulled their support in favour of an alternative.

There are two options now on the table. The first is the original plan, a huge scale project to build a brand new arena on a parking lot and football pitch across the road, while Scandinavium and nearby buildings turn into a shopping centre and housing district. The alternative is a plan to move Scandinavium to the location of the city’s most popular swimming pool, Valhallabadet, with some housing in the space inbetween. In the meantime a temporary arena would be built, to be converted into sports hall as a later date.

That is if the politicians can find any final agreement. It’s been nearly two years of conversations now about making a plan and still there are a lack of consensus, And, as Lotta points out to me, there’s disagreement not just between parties but within parties. Lotta told me that she emphasised to her board this morning how important it is to have a time plan either way. That way she can start planning for whatever the future rather than letting the many venues under her wing rot away while in wait for a decision. Even if plans get approved we are not expecting an arena to be complete by 2027 at the earliest.

A Lesson For All Nations

Lotta may feel it’s not losing a competitive edge with its current set up, but neither does it have a landmark venue that the whole of Europe would be excited to perform in. As traditional in the middle of Melodifestivalen season, Sweden is one of the favourites to bring home a seventh victory in May. If that becomes the case Gothenburg is able to host, but it’s going to have to find ways to work around limitations just like Kyiv and Tel Aviv had to do. The Malmö and Stockholm editions this past decade were some of the cheapest hosting’s of modern Eurovision and it would be hard to argue against returning to Globen or the Malmö Arena with their better on the ground logistics.

The Gothenburg story is one that is replicated across Europe each year once the winner of the Eurovision Song Contest is known. The Eurovision Song Contest needs more than a space for a four hour Saturday night show. It needs weeks of preparation, the ability to bring in equipment easily and to lift huge weights and volumes of equipment up above the audience. In a country like Sweden blessed with infrastructure and modern venues, making do isn’t enough. Gothenburg can host Eurovision, but it’s hard to see that ever happening in today’s Scandinavium.