How To Fall In Love With Sanremo Written by Ewan Spence on February 4, 2020

As the 70th Sanremo Festival gets under way, Ewan Spence looks over the Italian celebration to help you enjoy the experience broadcast live from the Ariston Theatre in Sanremo.

For most of Italy, the Festival della canzone italians di Sanremo is a musical highlight of the year. For many there’s an awareness that it has something to do with Italy’s Eurovision entry. For others it is a show that is to too big, too complicated, and too impenetrable to understand; and following Melodifestivalen is a bit easer.

What you need is a guide to watching Sanremo if you are not Italian. 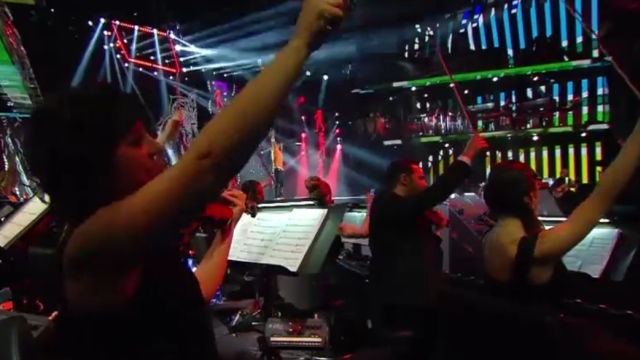 The RAI Orchestra at Sanremo

The simplest and easiest answer to ‘How To Watch Sanremo’ is to watch RAI1 in Italy, watch RAI International if it is available in your TV package, or head over to the Sanremo homepage and the RAI Player page (the geoblock normally on RAI Play is lifted for Sanremo)  I’ll be using a laptop with an HDMI output to push the signal to my TV, but others may prefer to grab the RAI Play mobile app and use Google’s Chromecast or Apple’s Airplay to get a TV picture.

Sanremo Is Not For Eurovision

Don’t go in to it expecting a National Final of 24 songs, a 50/50 vote, and a winner getting a ticket to Rotterdam. Actually, go in with that, but realise you are going to get much, much, more. Think the Royal Variety Performance, the Brit Awards, the Grammys, the World Cup, Montreal’s Just for Laughs comedy festival, London’s South Bank doing a retrospective of the last year in the United Kingdom, and a dash of Test Match Special… over five shows on consecutive nights.

That makes Sanremo a daunting prospect, with a slower pace and Italian culture getting equal billing to the twenty-four songs. Roll with it, you’ll be fine. And as you’ll find out, you don’t need to dive straight in for the full five nights.

There’s no better explanation of the power and status of Sanremo when you look through the guest stars. Scattered throughout the running order you’ll find musical performances from artists that are excited to fly in to sing a single song on a damp Thursday night between the competitive entries, essentially taking the place of Eurovision’s postcards.

Take Lewis Capaldi, who is pretty much on ‘route one’ to global stardom. He’s one of the singers this Thursday night – yes, Thursday, not even the Grand Final on Saturday – because that is the power that Sanremo has in the industry. Mika also pops up on Thursday, while Dua Lipa shows up on Friday,

Right then, let’s look over the timetable. Nearly four hours a night from Tuesday to Friday, and up to five hours on Saturday. That’s a lot of music to take in. You could dive in and enjoy being drenched in a firehose of music (it really is worth it), but for many moderation and small amounts of exposure are the way forward.

The format of Sanremo is tweaked each year, and one of feature of the 2020 edition is that no act is going to be eliminated. The 24 songs that start on Tuesday will still be there Saturday night. There’s no harm in picking up the story on Saturday – you’ll hear all the songs, you’ll have the pick of gust stars and acts, and the leisurely pace will allow you to jump into the other National Finals on Eurovision’s ‘Super Saturday’.

Looking to add a second night to your Sanremo experience? The obvious choice would be Friday night, where the 24 songs will be performed. It’s going to be very similar to Saturday night (although a different group will be voting on Friday night – more on the scoring in a moment).

Instead I would suggest you look at Thursday night. All the artist will be performing, but they won’t be performing their Sanremo 2020 entries. Instead they will be taking the traditional deep dive into the rich history of Sanremo and performing covers of some classic Sanremo entries.

To spice it up, the artists are allowed to invite other sings to perform with them. While some have decided to go solo – notably Francesco Gabanni taking on Toto Cutugno’s 1983 entry ‘L’Italiano’ – others have picked some spectacular combinations.

This night won’t count towards the final Sanremo scores so the artists can relax a little; although there will a trophy for the best cover song, as judged by a jury made up exclusively of the Sanremo Orchestra.

Not only will you see and hear the artists on this night, you’ll get a greatest hits of Sanremo.

I think there are two choices here to expand your viewing. If you want to go for a half-marathon of consecutive nights, then the Covers Night on Thursday gives you time to acclimatise to Sanremo before the competitive entries begin, the Friday night will let you hear the 24 songs in the main Contest, and then Saturday is the Final.

Alternatively you could go with the opening shows on Tuesday and Wednesday. Each of these shows will have 12 of the competitive songs, so you’ll have time to take in and really think about the entries, then come back for the Final… and you might find yourself curious as to the Covers Night on Thursday.

At which you’re pretty much looking at the whole of Sanremo. You might think that this is far too much music (really?) but Sanremo’s format is not like the roller coaster of the Belarussian open auditions or the kinetic speed of Melodifestivalen. You just need to watch it in a different way to other National Finals.

The Process Of Enjoying

The key lesson? Sanremo is social. This is most noticeable in the press room. You watch a few songs, you turn and have a chat to those around you, you head to the bar for some drinks and chat a bit more, then head back to press desks… just as the next competitive song is about to start.

Rather than focus on watching every single second at home with furious attention, just chill. For sure enjoy the main songs when they are on, but take a break over everything else and just keep half an eye on what’s going on. This is a leisurely experience worthy of the Italian Riviera.

Remember when I compared Sanremo to Test Match Special? The long days of international cricket games over multiple days, burst of action, breaks for tea and cake? That’s Sanremo.

The shorter National Finals dedicated to Eurovision demand you concentrate. Italy’s musical set piece is more about creating a relaxing environment for everyone to enjoy the experience at their own pace. Don’t fight that process, just embrace it.

As well as the main ‘Campioni’ contest, you also have the ‘Nuevo’ contest – the newcomers. Made up of the qualifiers from Sanremo Giovani and Area Sanremo, the eight finalists will compete during Sanremo to find the eventual winner. Tuesday and Wednesday night will each see two head-to-head duels to decide who qualifies for the Friday night final.

Think of Nuevo as the warm-up contest for the main contest, expect it to fill the first twenty minutes of actual time (after whatever delights we have for an opening performance). It helps set the rhythm of slow ‘entertainment/podcasts’ and guest singers, against the rapid runs of competitive songs, in your mind.

How Points And Votes Are Won

Sanremo is, of course, a contest, which means we have to keep score. And this is… complicated. There may be no eliminations throughout the five nights, but points are gathered after every performance. We will get intermediate results through the week, but there’s a lot of maths going to be applied on Saturday to get the final rankings before a super final styled vote.

There are four groups that are scoring Sanremo this year, but not every group will be voting each night. First of all, you have the traditional televote coming in.

Secondly there is the jury. Rather than a few hand-picked industry insiders, Sanremo uses a demoscopic jury made up of a few hundred members of the public who are heavily engaged with ‘music’ throughout the last year.

Up third are the members of the Orchestra. They won’t be taking part in the voting for the Campioni contest, but will be the only group that will judge the Covers contest on Thursday night.

Finally there is the Press. Yes, the accredited members of the mainstream press also get a vote. Wireless number pads are distributed around the Press Centre in the Ariston theatre, and as the songs end, the press cast their individual votes.

For the two opening nights, where the songs are debuted, the demoscopic juries will be voting, and the relative positions will be announced (12 on Tuesday, and all 24 on Wednesday). Thursday as noted is the Orchestra voting on the Covers. Friday will see the Press Room voting, and the rankings at the end of Friday’s show will be a combination of the demoscopic and the press room votes.

Friday is the final of the Nuevo Contest, and these votes will be a three way split between the demoscopic jury, the press, and a televote.

Finally we get to Saturday and the final show. It’s a similar set up to the Nuevo final, with the demoscopic jury, press room, and televote combining.  This will give us the final positions from twenty fourth to fourth. The top three then do a run off vote (essentially a super final).

The Ones To Watch

With all that said, we have twenty four acts and only one can take top spot (although a strong appearance can create media bus, which for many Italian acts is a prize in and of itself). Who’s worth watching?

It’s easy to start with the two Eurovision alumni in Raphael Guallazi and Francesco Gabanni. The latter was at Eurovision relatively recently with ‘Occidentali’s Karma’. He’s expected to return to the music that won him the Sanremo Nuevo Contest rather than the Campioni Contest. Gualazzi’s led Italy’s return to Eurovision in 2011.

I’m not sure if either of these performers would want to return to the Song Contest.

The first twelve songs will air on Tuesday night. Keep your eye on Diodato – who’s expected bring a big Italian power ballad – and Achille Lauro – not just for his song but for his fashion sense as well.

The last twelve songs arrive on Wednesday night. Elettra Lambourghini should catch many of the headlines thanks to her 2019 album release ‘Twerking Queen’ (and her grandad is a dab hand at making fast cars). You’ve also got the greatest band name at Sanremo 2020 with indie rockers Pinguini Tattici Nucleari (Tactical Nuclear Penguin) singing about Ringo Starr, and free styling rapper Rancor.

You can follow Sanremo throughout the week at rai.it/programmi/sanremo.