Malou Prytz was a small dot on the Swedish pop radar twelve months ago, but a shock qualification to the Melodifestivalen Final made her a household name overnight. Ben Robertson sat down with Malou to go through her life before, during and after Melfest

Malou Prytz (4th from left) and the other competing artists in the first heat of Melodifestivalen 2020 (Photo: Ben Robertson, ESC Insight)

Let’s start this story by travelling back in time exactly twelve months. Melodifestivalen’s first heat of 2019 was in Gothenburg, with big names in Swedish music like Mohombi, Wiktoria and Nano competing for places in the final. It’s an entertaining and tense show seeing which artists would succeed in their journey to go to Friends Arena.

On that night Malou Prytz was at home with family. Like many other millions of Swedes she is tuned into Melodifestivalen armed with sweets and popcorn. As family tradition dictates, her mum and her aunt make watching Sweden’s touring schlager circus into a big event, using it as an excuse to host family dinners. Dad’s not that keen, sometimes mad at mum for having to watch Melodifestivalen again. But he does.

Malou’s nerves, of which there were plenty, were completely justifiable. The following week she travelled to the Malmö Arena to make her Melodifestivalen debut. Taking part in itself was an achievement to be proud of. If you weren’t aware Malou was born on March 6th 2003.

Malou wasn’t even expecting to get through the first round of voting that night, when the seven battling songs are cut to five. After all she was performing 2nd in the running order and competing against huge names in Swedish pop music – Idol winner Liamoo, Polish pop princess Margaret, Andreas Johnson who has finished in the top three twice, to name a few. Malou was the unknown quality, and only securing 9% of audience votes from the Friday night rehearsal poll dampened any hopes of a shock debut.

But it was biggest upset in Melodifestivalen voting for years. In the voting Malou placed no lower than 3rd with any of Melodifestivalen’s seven age demographics on its app, and top ranked by the youngest 3 to 9 year old category. She was catapulted from obscruity straight into stardom.

Malou first started to really consider being an artist through her pre-teen years. Yes she was singing from age 3 and in music school from age 6, but it was a trip to Friends Arena that really set her heart on music as a career goal. It was for a pop event even bigger than Melodifestivalen, the visit of One Direction.

Malou went to Solna twice in two years to see them perform, and it was there where she could see her future.

”The first time I walked into Friends Arena in 2013 I got dizzy because I didn’t expect it to be so big.

”When I heard the songs and I heard everybody singing the songs – I realised this is what I wanted – I want to have a song that everybody can sing along to.

Malou’s small town, Ryd at the southern end of picturesque Småland, surrounded by lakes and woods, has a population of less than 2,000. Malou tells me at age 7 she was attending knitting meetups with the local grannies. A blissful childhood, but the One Direction experience send her on a path where she wanted much more than a little town could provide.

It was around the same time as the One Direction consert that Malou tried her arm at songwriting. With a friend from music school they wrote a song called ’Kärlek Kärlek Kärlek’ (’Love Love Love’). After performing it at their end of term show the pair thought the song could be sent off to Lilla Melodifestivalen, Sweden’s selection for Junior Eurovision.

There was a problem. Malou was, and is, bright, intelligent and successful. So successful infact that she managed to skip a school year, and Malou was only 11 at the time they wrote the song. She describes her life at school as one where she ’had it pretty easy’ because she could ’read something once or twice and it would stick in her head.’

The problem with this was that being 11 meant she was too young to take part. The rules for Junior Eurovision at the had an age limit of 10 to 15, but Sweden insisted on a minimum age of 12.

Waiting a year didn’t help. By that point Sweden had withdrew from Junior Eurovision, and still hasn’t returned to this day.

Fast forward us to 2017 and Malou, together with her mum, watched the 2017 Melodifestivalen heat live in Växjö, her local county town. Two of her competitors in his week’s heat also competed that night. Robin Bengtsson opened the show and won the entire Melodifestivalen with ’I Can’t Go On’, and Felix Sandman was a part of FO&O who got to the final with ’Gotta Thing About You’. Unsurprisingly Malou was a bit of a Foooer, and discovered recently a picture of her with Felix, Oscar and Omar deep within her computer.

Now fans are lining up to take picture’s with her.

The Malou of today is very different. She’s focusing in interviews about describing how she has now grown up and matured over the last year. There’s been a lot of extra responsibility. For a start, much of her work is now based in Stockholm, so there’s much commuting between home and a new apartment in the capital. Furthermore these trips are now ones she takes alone, sometimes for days at a time.

Apart from Melfest season it is the summer that is the busiest, with Malou this year having her own tour around the country. She has even managed to go abroad, collaborating on the song ’All Good’ with German artist Millé that’s already been streamed 3.5 million times. However, as she explains, going on tour as a solo artist can be quite lonely.

”I had a show one day and then a whole new place the other day, so I was staying at a hotel and I was going to eat dinner by myself in the hotel room. I didn’t have a fork so I didn’t know what I was going to eat with so I was looking everywhere. I used the shoehorn as a spoon to eat the food – that was a bit creative! It was potato with something and it still tasted good.”

While a daft story, for me it’s quite charming for Malou to open up to embarassing parts of her whirlwind lifestyle. It shows how comfortable she is growing up in the spotlight. However, the pressure to do her best is still there. Despite all this Malou is still studying the economics programme at gymnasium and is developed a real passion for studying law.

”I always want to do my best in everything I do and I put lots of pressure on myself at times, sometimes too much maybe. I want to do good in school, I want to get high grades, do well in my music career. Sometimes it can be too much.

”My mum always says that I should calm down some time, skip school on some day because you have worked hard sometime. But I also want to be a part of everything, I don’t want to miss everything. That’s the hard thing with me.”

The hard parts though are intertwined with all the good. While performing on the national TV show Bingolotto she met Melodifestivalen veteran Shirley Clamp. Shirley explained to Malou that her daughter looks up to her and that it felt so good for Shirley as a parent because, as Malou puts it, ’I was a good person’.

Hopefully Shirley’s daughter will like the new grown up version of Malou she’ll see on Saturday.

Malou has returned to Melodifestivalen with the song ’Ballerina’, composed by big name Melodifestivalen hitmakers Jimmy Jansson, Thomas G:Son and Peter Boström. Malou explains the song is about ’following your heart, believing in yourself and not caring what other people think of you.’

The mood is different too, gone is the squeaky clean pop from last year to be replaced a darker, more mystic production. But it’s still pop at its core, and the bombastic chorus has reminded many of Sia and refuses to leave your head long after it’s over. Malou wants this to be ’powerful’, but also ’artistic’ and ’bigger in some way’. Compared to ‘I Do Me‘, I think it delivers on all three of those statements.

She is joined on stage by one dancer, Maria Avatare, who so happens to look like an extra replica of Malou. Maria plays the role of Malou’s alter ego – and the interplay of the two different characters on stage is part of this song’s message, are we really being who we want to be? 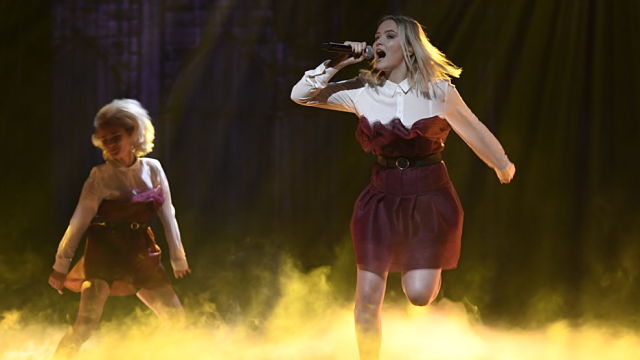 Regardless of Saturday’s result, Malou’s got a song that without question is going to be a hit across Sweden once more. It will be the kick-off of another Malou Prytz album, but this time blending her pop with more genres and more heartfelt storytelling. It fits her well, and being a more mature artist feels completely natural.

She would be an asset to the Melodifestivalen world and Swedish music scene if her career keeps going throughall the success as it has done so far. But it doesn’t mater if not. Few people in this industry are as well-rounded as Malou is, and if opportunities in the future don’t open themselves up in the music world, she’ll find success in another sector of society.

Malou Prytz is a 16-year-old with the world at her feet.

Ben Robertson interviewed Malou Prytz after she was most popular on our Facebook poll leading up to Melodifestivalen’s first heat. Check out the ESC Insight Facebook page to vote for the artist you want Ben to interview next week.